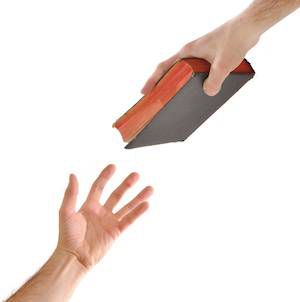 We all have books borrowed months or even years ago still sitting on our shelves, right? I keep mine in a stack next to my TBR shelf (technically not a shelf as it sits atop a bookcase–but why not use that area?). I have a few integrated with my books—with those, I’ve stopped lying to myself, I know they’re never going back. Oh, don’t look at me like that; you know exactly what I’m talking about. With loving books inevitably comes hoarding books.

My sister and I share the bad habit of borrowing books and never returning them. I think we both wait for the borrowee to request their books back and secretly hope they won’t, until we forget they were never ours in the first place. I’m not proud of this, and I’m trying to get better, but let’s call a spade a spade. What gets tricky is when we “borrow” each other’s books. She’s had my copy of Alison Bechdel’s Are You My Mother for… two years now? Three? And I have her copy of The White Album by Joan Didion. I haven’t read it yet, but that’s not why I’m keeping it. She can have Didion back just as soon as she returns Bechdel. …but only if she remembers I have it.

If you don’t recognize yourself in my story, you probably recognize someone you know. I asked my fellow Rioters to share their stories of books borrowed and lent only to be kept or returned years later. (See? I’m not alone.)

When I was in college in Kentucky with one of my best friends from high school, she borrowed my copy of Naked by David Sedaris. Then I moved away and she moved away; over time, I almost forgot that I ever owned the book (or perhaps I forgot that I did not have my copy any longer). Four or five years later, when we were both living out west, I got an email from her asking for my address. A short time later, a large envelope covered in her distinctive handwriting showed up; inside was my copy of Naked reunited with me after four or five years. –Susie Rodarme

As a journalism student, I was always wanted to get my hands on books about the profession I was eager to start practicing (how naive I was) and I borrowed my tutor’s edition of Pictures on a Page by Harold Evans. This book is beautiful—it’s filled with historical, journalistic photos and the text puts them into context. I love it and I borrowed it completely innocently. Fast forward to my last year of study; depression hit me hard but I was really proud to deliver my final project in time and I really thought I would get top marks. When I didn’t (I got second best marks, so it wasn’t terrible) and my tutor callously blamed my depression for it (ableist much? No thanks.) I kept the book for myself. Yes, it was vindictive, but he wasn’t a great person to start with so OH WELL. –Nicole Froio

I leant my dad Craig Ferguson’s Between The Bridge and the River (I hope he writes more novels) years ago, like in 2006 when it came out. I’ve asked him for it a bunch of times since and he kept telling me he never borrowed that one. Turns out HE DID, and I discovered so when an avalanche of books fell on me off his office shelf—my Craigy landing on top. It was a sign from the book gods that he wanted to return to the comforts of my shelf. Also, it turns out that those quirky metal people bookmarks tear pages when the book is shoved into a shelf because the bookmark’s “armpits” slice down like knives through the pages. *le sigh* There’s also a book a friend borrowed that upon returning and seeing its conditions I asked her if she’d attempted to read it underwater. It wasn’t even book shaped anymore. But neither her nor I can remember which book it was so water under the bridge (sorry). –Jamie Canaves

I went down to Houston a few years ago to see a college friend of mine. We spent the weekend like we did in college—a couple glasses of wine, good dinner, bad television, and talking about books. We have some similar tastes, and she always texts me at the airport asking what she should pick up for her trip (she travels a lot). At the end of our weekend, she told me to take home Murakami’s 1Q84 since she knew I was a fan of his work. I do love Murakami, but that particular book is so large and intimidating. I told her I wasn’t going to borrow it since she’d never get it back; it would take me forever to get to it, then forever to get through it. Fortunately, she said that wasn’t an issue. Which is a good thing, since it’s still on my shelf. Still unread. Someday! Someday I will find the courage to read it and maybe even return it. –Kelly Jensen

A friend of mine lent me a copy of Orson Scott Card’s Ender’s Game when I asked for a recommendation for a science fiction novel. I read it and then placed it on my shelf. A while later, she and her husband were getting divorced and I felt really bad about having Ender’s Game on my shelf as they were splitting up their home. So I told her that I had a book of theirs and that I would like to return it. She claimed she had never lent me any books and that I could keep it. After the divorce dust had settled, I mentioned this to her now ex-husband. Turns out, Ender’s Game was his book. I still have it, by the way. –E.H. Kern

Okay, now it’s your turn. What books are you still holding onto? Which book do you seriously regret lending out?