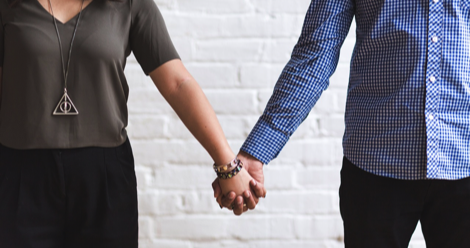 I only recently started going to author events at bookstores. I worried about looking like a loser. But there’s just something special about a small group of people sitting in folding chairs to talk about a book, you know? And it’s even better when it happens to be a book that resonates with you and your partner. 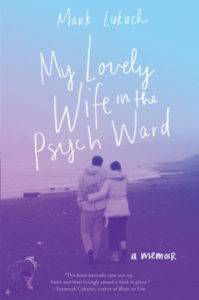 Mark Lukach, whose memoir My Lovely Wife in the Psych Ward came out in May, visited my local indie a few weeks ago. My boyfriend saw a sign in the shop’s window and said, “Hey, some guy wrote a book about a psych ward. Sounds like your kind of thing.” And then I dragged him with me.

I’d heard of this book, of course. Its gorgeous cover—blue and purple gradient over a couple holding onto each other as they walk ahead of their dog on the beach—had caught my eye. I added it to my dauntingly long want-to-read list. I figured I’d read it when the time came.

The time came. See, my work schedule isn’t a normal 9-to-5, Monday-through-Friday thing. I work nights and weekends, and just have to cross my fingers that intriguing events are scheduled for my two weeknights off. But this event was on a Sunday afternoon, with just enough time afterward to get tacos before heading out to work.

I’ve battled ye olde beast called depression for a nice chunk of my life. But I’ve always battled it alone.

Now I have a partner. And he doesn’t like when I say things like, “I just want to be dead right now,” when he asks how I’m feeling. He gets serious, hugs me tight, and says it’s painful for him to hear me say that. He tells me that my depression isn’t just mine—it’s ours.

That’s the message Lukach wants to tell with his book: That mental illness doesn’t only belong to the sick one. It belongs to the sick one and everyone who loves them.

In the corner of my cozy bookstore, Lukach reads a portion from his memoir of his wife’s psychotic break and the time she spent in the psych ward. She’s there for twenty-some days, she comes home, she slowly recovers. But she still has that gnawing depression. He asks what she wants to do today, and she says she wants to go to the Golden Gate Bridge and jump. He cries as he reads these words he’s written about convincing his wife to want to live.

My Lovely Wife in the Psych Ward is about a relationship working through crisis. But it’s also the psych ward story told through the eyes of the caregiver. Because so often, we only think about and talk about the person who’s sick—never the ones on the sidelines.

I talked to Mark after the event and thanked him for sharing their story. I told him how I can’t think of any book about mental illness told from the perspective of the periphery characters—the only thing that comes close is Susannah Cahalan’s Brain on Fire, where she interviews her family members and doctors to piece together the story of her own illness. He said he was looking for this book when he needed it. So he had to write it.

As I’m beginning to plan my life with my partner, and opening up to him about how sometimes the depression is just too dark, I’m glad this book exists.

So I can be more careful with my words when those dark times arise. So I don’t hurt him, or anyone else, with my careless comments about mortality. So I acknowledge that this beast isn’t just mine anymore, but something to fight together.

Books always have the power to teach us about the world and about ourselves. This lesson just happened to come for me at a time I needed it most.