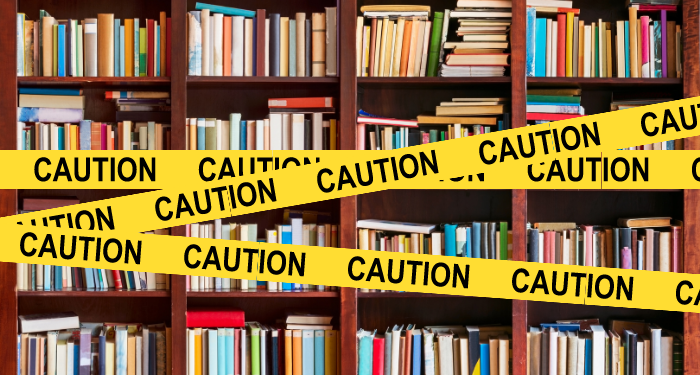 If you’ve been in the world of books and reading for a while, today’s climate about book banning might feel awfully familiar. The “Think of the children!” rhetoric, the accusations of teachers indoctrinating students, the banning of Toni Morrison and Heather Has Two Mommies…are we sure it’s 2022 and not the 1980s or ’90s?

It’s disheartening to feel like we haven’t progressed at all, that we’re still having the same arguments from decades before about whether it’s age appropriate for a child going through puberty to read a book about puberty or whether white children are too delicate to learn about the existence of racism between active shooter drills.

Because I kept getting déjà vu while reading about what book banners were saying in school board and library board meetings, I decided to make a quiz to see if you can tell the difference between the language used to ban books in decades past and in the present. I’ll be honest: the idea was more fun in my head. Wading through book banning logic then and now is aggravating, to say the least.

So put your skills to the test and see if you can match the scandalized quote or phrases to the time period! I’ve listed the answers afterwards, with links to the sources. (Some quotes have been edited for brevity.)

1920s, The Well of Loneliness by Radclyffe Hall: “I would rather give a healthy boy or a healthy girl a phial of prussic acid than this novel.”

1950s, The Wizard of Oz by L. Frank Baum: “the inclusion of a good witch is theologically impossible, because witchcraft is bad and, therefore, a good witch could not exist.”

1950s: superhero comics “present our world in a kind of fascist setting of violence and hate and destruction. I think it is bad for children” and “I think Hitler was a beginner compared to the comic-book industry.”

1970s, Slaughterhouse-Five by Kurt Vonnegut: for being “depraved, immoral, psychotic, vulgar, and anti-Christian.”

1980s, Catcher in the Rye by J. D. Salinger: for being “blasphemous and undermines morality.”

1980s, A Separate Peace by John Knowles: for being a “filthy, trashy sex novel.”

1980s: “Members of the Alabama State Textbook Committee called for the rejection of The Diary of Anne Frank because it was ‘a real downer.’ It was also challenged for offensive references to sexuality.”

1990s, in an ad in the newspaper: Heather Has Two Mommies by Leslea Newman for “pursuit of legitimizing homosexuality” and asked, “can prostitution, bestiality or incest be far behind?”

2019, And Tango Makes Three by Justin Richardson: “influence[s] impressionable young minds as a very vulnerable age to accept abnormal relationships as normal, acceptable and to be expected.”

2019, Two Dads by Carolyn Robertson: “The book idealizes the normalization of the homosexual partnership including the adoption of children with Two Dads.”

2020s, Class Act by Jerry Craft: because “kids will be brainwashed that one race is superior than the other.”

2021, Gender Queer by Maia Kobabe: “I don’t know how you defend this. Why would you write such a thing? It’s so — just garbage. It’s absolute filth.”

2021: “I’m seeing young children being robbed of their innocence by being introduced or exposed to gratuitous sex and violence in both videos and literature in school.”

2021, Maus by Art Spiegelman: “because of its unnecessary use of profanity and nudity and its depiction of violence and suicide.”

2021, Beyond Magenta: Transgender Teens Speak Out by Susan Kuklin: “Why are we sexualizing our precious children?”

If you want to stand up against this most recent wave of censorship, check out the anti-censorship tool kit and stay informed with the weekly censorship news roundup.