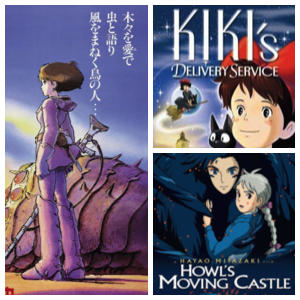 I don’t know if you’re a fan of filmmaker and animator Hayao Miyazaki. There are reasons you might not be. For example you might hate happiness and art or you might be from another world and find the films hard to watch with your sensory pseudopod. If you’re around me for any amount of time, though, you’ve heard me go on and on about Miyazaki and Studio Ghibli. Miyazaki is possibly the finest living animator, a fact that very few other animators are likely to dispute. His directorial career goes all the way back to 1979.

An interesting fact about Miyazaki, though, is how many of his films come out of book adaptations. They aren’t particularly faithful adaptations. Mostly, Miyazaki starts with a book and then wanders off to explore what he wants to explore and draw what he wants to draw. While his most memorable films are entirely original (My Neighbor Totoro, Spirited Away, Princess Mononoke and my personal favorite-by-a-hair, Porco Rosso) so many of his others have come from somewhere else.

(A note: This is in no way a comprehensive list, either with Miyazaki or with Studio Ghibli in general. I would stretch the bounds of article-writing and you would all get really sick of listening to me blither)

Nausicaa Of the Valley of the Wind

Although Hayao Miyazaki’s directorial debut was earlier, with Lupin III: The Castle of Cagliostro, his next film Nausicaa was his first original project that wasn’t part of a larger franchise, done with someone else (usually elder and eventually fellow-Ghibli founder, Isao Takahata). Nausicaa is a remarkable post-apocalyptic story about warring factions of humans who are mistrustful of each other, and in danger from the vast toxic forests which have swallowed up the majority of the world, forests which are full of massive monster-like insects and creatures. The air isn’t even breathable, except in very small pockets of land. The story follows a young girl, Nausicaa, who has to prevent war between groups of humans, prevent power-mad humans from awakening the horrible weapons which destroyed civilization before, and prevent a world of enraged monsters from swarming out of the forest and consuming them all.

It’s an epic and complex film, noted by many animation writers for its surprisingly complex and authoritative air. It’s a powerful film from such a new director. Perhaps this is because it didn’t appear in film-form first. Unable to get the project off the ground, Miyazaki and Toshio Suzuki (producer, right-hand-man, and general greaser-of-gears of Studio Ghibli) launched Nausicaa first as a manga series, which Miyazaki was writing and drawing. So essentially, Miyazaki got to do a complex first-draft of Nausicaa before he ever made it a film.

(It then became more confusing when, halfway through the manga Nausicaa, the project was greenlit and he went and made the movie Nausicaa. Then, after, carried on with the manga which began to veer widely from the movie, because if there’s one thing Miyazaki doesn’t do well, it’s repeat himself. They’re an odd pair together, the movie and the film). The film came out in 1984. The manga didn’t finish until 1994.

After Nausicaa, Miyazaki made two original films – the rollicking Laputa (which became Castle in the Sky in America) and the amazing Ghibli-Empire-building My Neighbor Totoro. After those, he moved on to another book adaptation, this time not based on his own work. It was Kiki’s Delivery Service by Eiko Kadono. A very sweet, slow-moving film, it’s the story of a young witch named Kiki who turns 13 and must leave home for a year to establish herself as a witch and discover her magical specialty. Together with her cat, Jiji, they find a home in a beautiful coastal city, where Kiki makes friends and discover she is in way over her head.

It’s a very sweet movie, in which nothing much happens for a long time except people interacting and Kiki struggling to establish a business delivering packages with her broom (flying being her only major skill). The end of the movie is tense and exciting (and without spoiling it, there is a scene with a push-broom, in a moment of disaster, where the whole movie holds its breath like nothing I’ve ever seen before).

I’ve never read the original book, I’m afraid, so how much similarity the book and movie share, I’m afraid I can’t say. The book’s available in English, so we should all go order it, read it, and report back. What I can say is that it’s a wonderful, amazing movie, one of my favorites. There are so many shots where you can feel a group of animators flexing powerful muscles behind the scenes. Plus, one could argue this is Miyazaki’s only urban film, in that it takes place entirely in a city.

Miyazaki doesn’t adapt very often. His next three films were all original material, and arguably some of his greatest movies. Following Kiki’s Delivery Service, Miyazaki made Porco Rosso (possibly my favorite Miyazaki film, although that’s nearly a meaningless term), Princess Mononoke, and Spirited Away. After all these, his finally came around to adapting Howl’s Moving Castle, the novel by Diana Wynne Jones.

How do I explain the plot of this? Young Sophie is transformed into an old woman by the Witch of the Waste, so she heads out into the Wastes to find her. Along the way, she encounter’s the fearsome wizard Howl’s castle, which is a rickety heap that wanders on fire-demon-powered chicken legs, and she winds up falling in with him and his friends and their adventures and attempts to avoid the brewing war between kingdoms.

That doesn’t really do the plot justice…and in truth, the movie doesn’t either. Miyazaki’s talked about how he should’ve waited a bit longer between Spirited Away (a luscious, massive movie) and Howl’s Moving Castle (likewise), and he’s kinda right. The movie is gorgeous and a lot of fun, but it feels tired and the plot frays very, very quickly. It also has very little to do with Diana Wynne Jones’ original novel, I was surprised to discover when reading it. In fact, they’re so different in places, it feels like two attempts at the same core idea. That’s normal for Miyazaki, though. Even his own plots and premises are just excuses to go talk about whatever he wants. If you know his films well enough, you can even spot where he has finished telling his story versus where the film actually comes to an end.

Will Miyazaki make any further book adaptations? It doesn’t seem like it. His last film, The Wind Rises (a film which obliterated me, possibly his finest work ever, seriously, I was a puddle by the time it was over and I was shell-shocked and silent about it for a week after seeing it) is supposedly his last one. He’s retired before and come back, but he’s older and in more pain this time…so sadly, that may be it. Fortunately, Studio Ghibli itself is a long way from done, so I think it likely that we’ll see more books adapted by the talented wealth of animators who surrounded Miyazaki. I can’t wait.