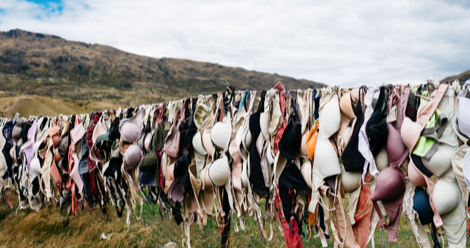 This morning, I woke up and my first thought was: “God, why so early and why is the sun a thing and do I want to work out today. Also why is my cat making a nest in my hair.”

It was not about the sun dappling over my “firm breasts” as I lazily stretched. (Also, why are they always firm in these scenarios? Just wondering.)

I yawned and went to get breakfast, and at no point did I think about how my boobs moved as I got out the stuff to make a breakfast smoothie. I was mainly thinking about what fruit to put in my smoothie and how fast I could get the coffee into my system because caffeine is a legal stimulant I require to function.

When I took a shower, I took mild note but only in the “oh God, they say I should probably make sure I don’t have breast cancer” kind of way, not in the long slow admiring way I often read about in books by male novelists. How much time do they think I have? I am a busy lady over here. I got THINGS to do. Today, that doesn’t include taking a long inventory of my own boobs.

I got really mad at a maintenance person for being super condescending and sexist, and at no point did I think about my boobs. They didn’t tighten in anger (WHAT DOES THAT EVEN MEAN?), but instead just kind stayed the way they normally do on my chest while I made faces behind the maintenance person’s back while they called me sweetheart. (Let meee call you sexisttt; I’m furiouss with youuuu).

Later that day, I read an article about a dog dying but my boobs didn’t droop in sadness, they just kept on being normal boobs while I went to go find my dog to hug him because oh man sad dog stories mean 10000% dog cuddles. My dog looked confused but pleased, and my boobs kept existing.

I walked my dog at night, and I saw a shadow that ended up being a bear, which was pretty scary (not that abnormal in my town, though, to be honest). At no point did I think about my nipples. Instead I thought about how to keep my very strong and excited dog from getting in a fight or trying to awkwardly make friends with a bear. He’s not GREAT at making friends with other animals, so this is a worry. I slowly backed away and tried not to make eye contact while not thinking about my boobs.

I had really good sex, and even THEN I’m positive I didn’t think about my boobs as much as male novelists think I do because other stuff is going on besides my breasts. JUST SAYING, cis straight men. Take note.

I did think about my boobs because I was PMSing and they were really sore, and I had cramps, but somehow I still made really solid rational decisions and functioned like an adult human being, despite the rumors to the contrary.

I did think about my boobs when I took my bra off because I thought wow, that is a relief, but then I just put on PJs and went to go read a book. It wasn’t a long drawn out process while I stared at the mirror and thought about their size or shape or general male-gaze beauty. Again, busy lady over here. How much time do their characters have and how can I get some to do more productive things with my life?

I’m not saying I never think about boobs, or I don’t ever take time to look at them, but I’m also saying male novelists should stop using phrases like “her nipples hardened in terror” about 11 year olds, and maybe just talk to a person with boobs while not staring at them.

When we said we want fleshed-out characters, we weren’t talking about more discussions of chest fat.

Next time on fun facts for cis male novelists: vaginas don’t work that way either.