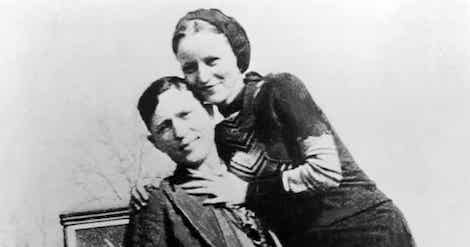 Sponsored by Children of Blood and Bone by Tomi Adeyemi.

An old green notebook believed to contain poetry written by the notorious outlaws Bonnie Parker and Clyde Barrow has been put up for auction by Barrow’s nephew.

The pair, who went on a 21-month crime spree robbing banks, gas stations and restaurants at the height of the US’s Great Depression, were shot and killed in a police ambush in Louisiana in 1934. Barrow was 24, and Parker, who had teamed up with Barrow on his release from prison years earlier, was 23. The pair became even more famous when they were played by Faye Dunaway and Warren Beatty in the 1967 film, Bonnie and Clyde.

I wonder if we’ll ever see it after it goes to auction.

It’s a predicament most of us have been in – you’re reading a book and need something to keep your place.

One Oklahoma teacher has made a hobby of finding these old bookmarks, even reuniting a more than 100-year-old place-keeping poem with the author’s family.

Sir Philip Pullman’s second installment in his Book of Dust series, where he returns to the world of His Dark Materials, will be released in October.

Heroine Lyra Silvertongue is back as an adult in The Secret Commonwealth.