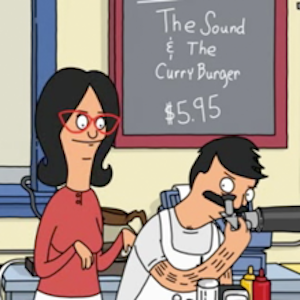 It didn’t take long for me to devour all of the episodes of Bob’s Burgers that I could when I watched one on a whim. For those who aren’t familiar with the show — the first three seasons are streaming through Netflix, with episodes of season four easy to see in rerun — it’s about a family that runs a burger joint. It’s a funny and smart cartoon, the kind featuring a quirky family but one where the humor isn’t dependent upon belittling the characters but instead, it’s based upon embracing those charms. It’s a toss up for me which of the family members I enjoy most, with Louise and Tina neck-and-neck.

Like most restaurants, “Bob’s Burgers” features a daily special, and seeing what the Burger of the Day is one of the most enjoyable parts of the show. They’re creative and total nerd joy for pun enthusiasts.

But beyond the Burger of the Day being a fun play on language, many of the burgers also happen to be odes to literature. So without further ado, here’s a look at the literary love served up on Bob’s Burgers during its first four seasons. All images are courtesy of the Bob’s Burger of the Day Tumblr.

The first example isn’t based on a book, but it’s a perfect example of a portmanteau. What do you get when you combine tuna with a tsunami? The “Tunami” burger, of course.

Things get a little wild with Bob’s “Last of the Mo-Jicama,” an ode to James Fenimore Cooper’s Last of the Mohicans.

The special of the day is a little more obscure to some readers, the “Camember-ly Legal” burger. It’s based on the adult magazine Barely Legal.

A good old homage to William Faulkner’s The Sound and the Fury via Bob’s “The Sound & The Curry” Burger.

On season one alone, Bob covered his adult magazines AND his kid lit, as seen in this episode’s “One Fish, Two Fish, Red Fish” Hamburger. Dr. Seuss would definitely get a kick out of this one.

This one’s a little tricky to see, which is unfortunate because it’s so good. The burger of the day is the “Mushroom with a View  (Porcini on a Double Decker).” Think E. M. Forster would have ordered one?

One of the things that took me a while to get used to when starting Bob’s Burgers was that Bob Belcher is voiced by H. John Benjamin, who also voices Sterling Archer in Archer. They’re exceptionally different characters, but tuning out, it got a little jarring hearing Bob say something and getting it mentally confused with Archer.

The writers naturally played this up in an episode. The cross-over(ish) show featured a literary burger of the day as well.

There were two burgers of the day on the episode, the one pictured above (which isn’t literary) and the second, which was the “Émile Gorgonsola burger with J’accusecubers.” Seems like a choice one of my fellow Rioters would love to sink her teeth into.