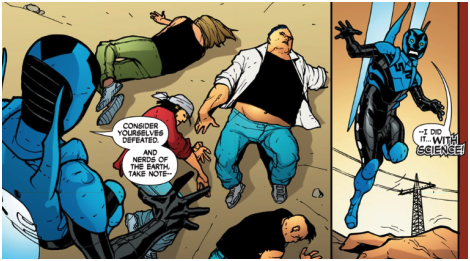 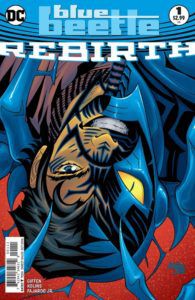 Jaime’s extra-grimacey return to the DCU in Rebirth, by Scott Kolins.

Well, it’s official: next month’s issue of Blue Beetle (#18, by Chris Sebela and Scott Kolins), will be the series’ last, and it’s anyone’s guess when we’ll next see Ted Kord and Jaime Reyes in action.

On the face of it, it’s hard to complain too much. A year and a half is a decent run for a comic these days, and slightly better than the last Blue Beetle run, which had 17 issues. (Fun fact: there have been nine different volumes of Blue Beetle by three different companies; the one ending next month is DC’s fourth.) For that matter, this latest bout did what fans have been clamoring for for over a decade: brought back Ted Kord as a lead and paired him with his successor Jaime Reyes in a wacky mentor-protege relationship, much of it penned by fan favorite writers Keith Giffen and J.M. DeMatteis.

The only problem? It wasn’t, uh, any good.

From the start, things were rocky for this series. Giffen’s initial scripts were overly dense, cramming every page with dozens of speech balloons. Despite that, we were never told how Jaime Reyes had gotten an alien-and/or-magical scarab attached to his spine, how he’d met Ted Kord, or the scope of Ted’s past superhero career. Kolins’s pencils were rushed and messy, heavily influenced by DC’s too-grimacey house style that hasn’t quite managed to drag itself out of the ’90s, complete with questionable anatomy and an unappealing costume redesign. Basically, once you got past the sheer joy of seeing Ted and Jaime interact, there was no there there. For those who aren’t Blue Beetle diehards like me, there was never any there there to begin with.

Well, so what? They can’t all be gems, even if they do star two of my favorite characters.

Except Jaime Reyes should be a star, and the fact that he’s not speaks to repeated failures on the part of DC. 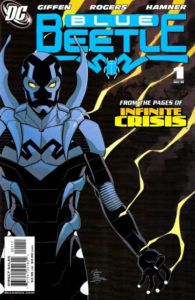 The first issue of Jaime’s first series, by Cully Hamner.

Jaime’s original 2006 series was a superbly plotted adventure—initially by Giffen and Leverage’s John Rogers, then just Rogers, with phenomenal art by Cully Hamner and Rafael Albuquerque. It gave us a tremendously endearing teen hero with close-knit relationships with a fully fleshed-out cadre of lovable family and friends, and depicted a setting (El Paso) and demographic (a largely Mexican American cast) that’s rarely seen in mainstream comics. It sold over 50K at its debut, but despite critical acclaim and a cult following, sales dwindled until it was one of DC’s lowest selling titles. To DC’s credit, they gave it a number of chances, and even un-canceled it once due to fan outcry, but the numbers weren’t there, and the series ended with issue #36.

But DC also placed Jaime front and center in their conversations with the mainstream media about their latest push for diversity. A 2006 article in the New York Times highlighted Jaime, Kate “Batwoman” Kane, and the Big Ten as hot new DC properties that showed the changing face of the DCU (Kate had recently been reintroduced into continuity—after half a century—as gay and Jewish, and the Big Ten were a team of Chinese heroes who worked for the Chinese government). And yet Jaime was nowhere to be seen between 2013 and his Rebirth series in 2016. Kate vanished for a while in the Oughts and her long-delayed solo series was thrown into upheaval when the creative team quit after being told that Kate couldn’t marry her partner Maggie Sawyer (part of DC’s infamous “superheroes can’t have happy lives” edict). The Great Ten are still AWOL (which admittedly might be for the best). But it’s pretty disingenuous to collect cookies for “diversity” when you don’t give continued support to the characters in question, while leaving what comics they do get primarily in the hands of white men. 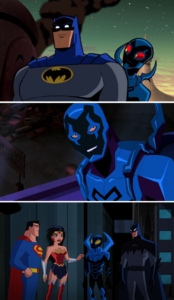 Jaime being cute as, well, a bug’s ear in Batman: The Brave and the Bold, Young Justice, and Justice League Action respectively.

Meanwhile, Jaime’s appeal was noticed by DC Entertainment, who gave him prominent roles in Batman: The Brave and the Bold, Young Justice, and now Justice League Action. A Blue Beetle TV show was teased back in 2010, well before the current glut of live action superheroes on the small screen, and test footage of the costume was shown at SDCC in 2010. Dude has been a Happy Meal toy many times over. We are seriously overdue for some Blue Beetlemania.

And yet for some reason, DC can’t seem to make a Blue Beetle comic work anymore.

Jaime’s second series, kicked off in 2011 as part of DC’s New 52 initiative, was an uber violent, joyless exercise in stereotypes and grimacing that lacked everything that had made his previous run so charming. It was canceled in 2013—right when Jaime was added to the roster of the Young Justice animated series. Readers were told he’d be appearing in a cosmic-based team book with characters like Lobo and Space Cabbie that never materialized. Aside from the continuity headache that was 2015’s Convergence, Jaime disappeared from continuity until his disappointing Rebirth series. Now he’s disappearing again.

Both of the Big Two show an astonishing inability to leverage success in film or television into success in comic book sales. Over and over again, it boils down to the same problem: a failure to connect with a market outside of the aging straight white male fanbase they’ve been relying on for decades. Whether this is due to lack of insight into that larger market or active resistance to including it, I don’t have the insider knowledge to say. 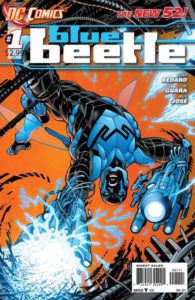 At Marvel, this lack of vision means fresh, diverse series canceled prematurely because the direct market doesn’t preorder them. At DC, the series don’t even get as far as being fresh and diverse. We don’t have to look any further than Giffen, a white guy in his 60s whose career started in the 1970s, getting tapped to write a series about a Mexican-American teenager. (Penciler Scott Kolins is 50.)

I say this with no disrespect towards Giffen, who co-created Jaime, and should get as much credit for the modern Ted Kord—one of my all-time favorite comic book characters—as his official creator Steve Ditko. You will not find anyone ready to stan harder for Giffen and DeMatteis’s Justice League International than one Jessica L. Plummer. But that series is 30 years old, and Jaime deserves a more youthful creative approach, one that can connect with the kids and teens who have been seeing him on Cartoon Network for a decade. He also deserves more Latino voices behind him than he’s gotten thus far. (Though Albuquerque and Ig Guara, who drew most of the first and second runs respectively, are Brazilian, and Tony Bedard, who wrote the second run, is Puerto Rican.)

Jaime Reyes could be DC’s Ms. Marvel. He’s a charming, adorkable teen hero with a great character design and a lovable supporting cast. He’s got far more name recognition than Kamala did when she debuted. He’ll probably never be a bestseller in the direct market, but he could do gangbusters in trades, non-direct market graphic novels like The Unbeatable Squirrel Girl Beats Up the Marvel Universe, or even prose novels like Jason Reynolds’s Miles Morales: Spider-Man. 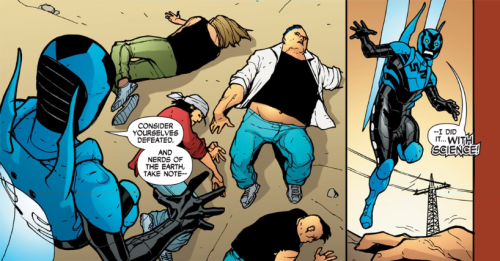 LOOK AT THIS PRECIOUS NERD. LOOK AT HIM.

Moreover, like Kamala, he belongs to a demographic that’s being specifically targeted by our current administration. There are important stories to be told—ideally by Mexican-American writers—about what it’s like to be Latino in a border state right now. More generally, there are millions of Latino kids and teens in this country who deserve to see a hero who looks like them having fun, exciting, well-written-and-drawn adventures. Escapism shouldn’t just be for white kids.

But DC is not going to find that creative team by digging through their rolodex from the ’80s. (Seriously, two years ago they launched eight miniseries as an attempt to diversify and “freshen up and contemporize” their lineup. The average age of the white, male writers involved, including Giffen, if you removed the one WOC? 63. I’m not trying to be ageist here, and there’s a point to be made about how the comic industry pays so poorly no one can afford to retire, but by and large, dudes in their 60s are not the best at writing hip modern teens.)

They need to cast a wider net and find legitimately fresh, contemporary talent—writers and artists who would absolutely kill it on a Blue Beetle series. And then—lest they fall into the Marvel trap—they need to promote that comic, and not just with house ads to Wednesday Warriors. They need to give it time to find its footing in trades, and be supported by booksellers and librarians. (It should go without saying, but apparently doesn’t, that this series about a teenager best known for his cartoon appearances should be all ages, or at least YA.) Jaime could be a huge success for them, but they need to put him in a position to achieve it.

After all, the character deserves it. And the millions of kids out there who look like him do too.