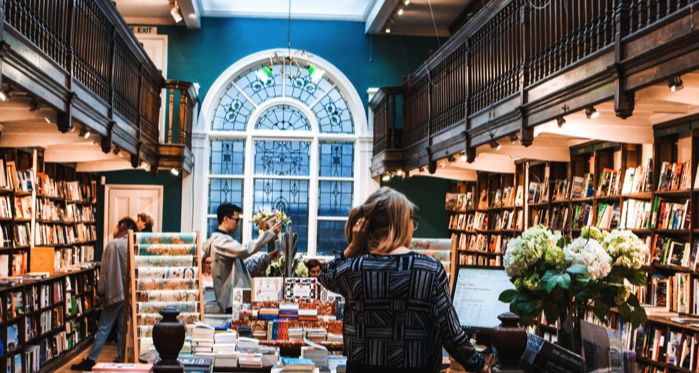 It’s very difficult to know which books will be remembered over time and which will only be in the zeitgeist for a season. The truth, disconcerting to authors hungry for a legacy, is that nearly all books will be forgotten in a matter of generations. Sometimes, because I’m maudlin, I think about all the books humanity will never have any chance to know about. Incunabula, what books printed before 1500 are called, mostly exist in single copies. How many books, therefore, are fully extinct?

Instead of fully spiraling about this staggering loss, I decided to read about the patterns of forgetting. One interesting tendency, as laid out by literature scholar Lise Jaillant, is that middlebrow literature tends to be forgotten more than highbrow or lowbrow literature. I recognize the terms for these distinctions are rooted in phrenology, a troublingly racist pseudoscience. But the terms are still in use, unfortunately. See, for example, this recent article asking where all the middlebrow culture has gone.

What’s especially fascinating about Jaillant’s work was her focus on the novel Forever Amber. It’s a semi-forgotten blockbuster book and the biggest fiction seller for 1945. Forever Amber has continued to have small ripples in culture. For one, the reason anyone has the first name Amber is because this book originated it. Secondly, if you look at a source of book reviews like Goodreads, people are still reading it at the rate of a few ratings and reviews per month. Plus, it’s still in print, as part of Chicago Review Press’s “Rediscovered Classics” series. Of course, that whole rediscovery part certainly implies it was forgotten for some period of time.

What Were the Blockbusters?

In addition to reading a lot, I grew up around a lot of books, giving me some familiarity with books popular before my time. Not wanting to rely solely on my own expertise about what books are forgotten or not, I did consult Goodreads to see if, like Forever Amber, the reviews continue to trickle in. Among these forgotten blockbuster books, I developed a taxonomy of sorts. I’ve theorized as to what subculture may remember these books, how trends have changed, and why books sell a lot in the first place. Even then, I don’t have great explanations for why some blockbusters become forgotbusters. Maybe you’ll have a theory.

Forgotbusters Type One: For Cinephiles Only

It honestly surprised me that blockbuster books are virtually always made into films. It might seem like a recent trend that any book that gets some traction in this oversaturated culture ends up optioned for film or TV, but it’s really not.

Some of the forgotbuster books are memorable more for their films than their text. For example, I’d never heard of Anthony Adverse. It’s a historical novel about the fateful life of an infant abandoned at a convent who came of age in the Napoleonic Era. I’m not the only person unfamiliar with the book; it has only 32 reviews on Goodreads. But film buffs may know the title. It won four Academy Awards and starred Olivia de Havilland, a Hollywood legend whose fame has not yet dissolved into the mists of time.

Fans of Olivia de Havilland will get a tour of blockbusters and forgotbusters both. She was in Gone With the Wind, of course, adapted from the biggest selling book of both 1936 and 1937. She was also in Not as a Stranger, which boasts its bestseller status on its cover. Despite that disclaimer, it has garnered 258 ratings and 35 reviews on Goodreads. For comparison, Gone With the Wind has over 1.1 million ratings and over 22,000 reviews.

Not as a Stranger, whose plot summary I have to pull from the film’s Wikipedia article because no page exists for the book, is the story of a dedicated medical student who marries a rich older nurse to fund his studies. He doesn’t particularly like her and cheats on her, but I won’t spoil the ending. The book’s not in print, so you’ll have to snag a used copy if you want to know. Or you can watch the film, featuring Frank Sinatra.

I believe a significant factor contributing to forgotbusters is the decline of Christianity as the default religion in American society. A recent Pew study states that a majority of Americans are Christian. The percentage, however, has been steadily dropping over recent decades. The next largest group of people are those who are not religious in any way.

Biblical epics and historical fiction about religious figures were extremely common and popular in years past. Thanks to my mother’s fondness for cinematic biblical epics, I was familiar with some blockbuster titles. One is 1953’s top title The Robe. It traces the journey of the robe Jesus wore to his crucifixion, won by a Roman soldier in a game of chance. That book is more at the Forever Amber level and not a true forgotbuster. It’s still being read quite regularly, according to Goodreads.

Other biblical and religious stories have not had the same legs. The book The Miracle of the Bells topped sales in 1946. In 1948, the film gave Frank Sinatra another forgotbuster appearance. It has 15 measly reviews on Goodreads. 1942’s blockbuster The Song of Bernadette doubles as a cinephile’s book, owing to Jennifer Jones’s Oscar for Best Actress in the 1943 screen adaptation. The book has a mere 111 reviews on Goodreads. The Cardinal outsold all other fiction in 1950, and its 1963 film boasts a cast of well-known actors and six Oscar nominations. It has all of 60 reviews on Goodreads.

Sometimes in the scant reviews for forgotbusters, readers mention intentionally seeking out past bestsellers out of curiosity. However, for these novels with religious themes, many reviewers specifically mention how the books tie into their faith. More evidence to support my belief that these books no longer appeal to wide swaths of readers.

Plenty of blockbuster titles create a big stir upon publication. Forever Amber was banned in multiple states as pornography and still outsold any other book that debuted in the entire decade of the 1940s. Likewise, To Kill a Mockingbird has been controversial as a book used in classrooms for decades. Please keep up with our work on book censorship to see the latest news regarding what books are being challenged around the United States and what you can do to help kids get the books they need.

Other books causing a ruckus at their publication have not enjoyed continued popularity. In 1944, Strange Fruit topped the bestseller list. The author weirdly denied any connection to Billie Holiday’s 1939 song. The novel, which does include a lynching, is about the tragic fallout from a secret interracial relationship. It was banned in Boston and Detroit for lewdness. The book could not even travel through the U.S. mail for a period of time until Franklin D. Roosevelt interceded at the request of his wife.

While the U.S. still has a boggling fascination for an aforementioned old book written by a white lady that clumsily deals with matters of race (yeah, I said it), Strange Fruit hasn’t kept pace. It has 104 Goodreads reviews compared to the Other Book’s over 105,000.

When the Review is More Memorable than the Book

Another forgotbuster is 1957’s By Love Possessed. Despite author James Gould Cozzens being a Pulitzer Prize winner, it seems few readers dive into his backlist. By Love Possessed has 119 ratings and 11 reviews on Goodreads. I believe it’s the most forgotten book I found by that measure! The story follows 50 years in the life of a lawyer, with detailed attention to his professional life. Another controversial forgotbuster, the book was deemed anti-Catholic, antisemitic, and racist by readers and reviewers.

What’s far more interesting than this book is literary critic Dwight Macdonald’s review, titled “By Cozzens Possessed: A Review of Reviews.” It’s been credited with torpedoing Cozzens’s career, and it’s been hailed as one of the best eviscerating book reviews of all time. Having read it, I will accuse the review itself of racism and misogyny. Still, it’s a fascinating artifact, full of hand-wringing about how low reviewers’ standards are. It frets about the potential legacy of this deeply mediocre book. With the benefit of hindsight, it’s a rather humorous mountain out of a molehill. Critics are important, but they aren’t really the people deciding what books are going to last.

As I’ve mentioned, bestselling books make it to film, as a general rule. Sometimes, those films outlive the books, thanks to the allure of certain actors or directors. Other times, even the films don’t survive. Film is nowhere near abundant as print, considering that virtually no one owned personal copies of films for the first 75 years or so of the medium’s existence.

That means some forgotbuster books are also forgotbuster movies. Take The Black Oxen. It’s a science fiction story about a woman who undergoes a rejuvenation process. It was the best-selling book in 1923 and was made into a film starring the fabulous silent film legend Clara Bow. The book has 49 ratings and 19 reviews on Goodreads. What’s even worse, no complete version of the film is commercially available, as all known extant copies are incomplete and in mismatched formats.

Similarly, The Private Life of Helen of Troy, the top seller in 1926, was made into a silent film in 1927. On Goodreads, the book has 107 ratings and 21 reviews. The story follows the titular character from mythology, and the film was timed perfectly poorly. 1927 is the year talking films came to the world, the death knell for the silent film era. A single incomplete copy of the film is preserved at the British Film Institute.

These forgotten books with lost films struck me as something that concerns contemporary readers and watchers. I have a large book collection, but I don’t own physical copies of most of my all-time favorite movies. Streaming media leads to appearances and disappearances across different platforms, and many films and shows produced for streaming are not purchasable in a physical format.

So even though we think of anything produced in the age of the internet as forever, I suspect books and their movies will continue to be lost. That means there are future forgotbusters among us. If you’d like an example of a book I think may meet this destiny, I’ll say Hillbilly Elegy. It’s not fiction, I know (winky face). But it was an enormous bestseller, aimed at “middlebrow” readers. It was also adapted to a streaming-only film no one could purchase even if they wanted to. Ultimately, it bears all the hallmarks of a forgotbuster.

If you want to know what blockbusters I think will be studied in English classes generations in the future, I’d wager the Twilight and Fifty Shades end up on some curricula. Books both wildly popular and roundly derided as these have a lot to say about the culture that made them into phenomena.

I’m going to pick a forgotbuster to read. I’ve chosen The Black Oxen, because bestselling 1920s sci-fi written by a woman interests me just on the face of it. Maybe you should pick one too. If the idea of books sinking fully into oblivion is too sad to bear, you can do your part by keeping one alive in your own memory.