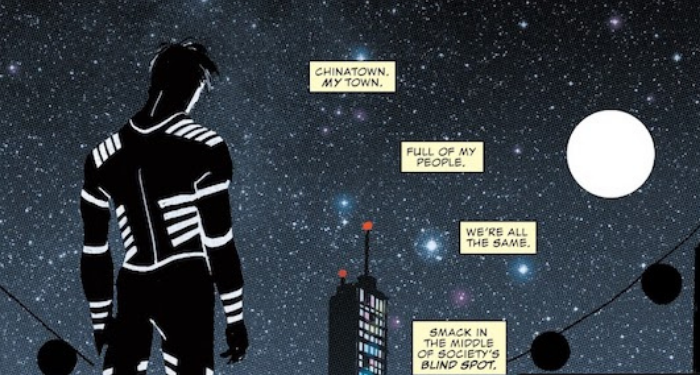 The past 80 years of comic book history are littered with hundreds of forgotten or underutilized characters. Some of them could be stars, but never got a proper chance to shine. “Give This Hero a Comic Book” highlights the Z-listers who deserve another chance in the limelight. Today, we’re talking about Sam Chung, also known as Blindspot.

Sam Chung debuted in All-New, All-Different Marvel Point One #1 (December 2015), an anthology book meant to promote the latest iteration of that thing Marvel does every 18 months where they cancel all their books and restart them all at #1. Sam was created by Charles Soule and Ron Garney to join the cast of their new Daredevil series, which launched two months later. (Note: technically Sam is the fourth Blindspot, but he has nothing to do with the previous three, so I’m not addressing them here.)

Sam and his mother Lu Wei are undocumented immigrants from China who now live in New York City’s Chinatown. When he’s first introduced, Sam is working as a janitor at Columbia University, but he’s used his scientific genius to build an invisibility suit, and has decided to protect his community as the vigilante Blindspot. Daredevil — ironically, the only person who can “see” Blindspot thanks to his powers — takes the fledging hero under his wing.

Together, Daredevil and Blindspot investigate a new Chinatown-based crime boss, Tenfingers, who runs a weird, mystical cult that involves a lot of people cutting off their own fingers. (It’s pretty gross.) Sam’s mom Lu is fully on board with Tenfingers, who it turns out is drawing his power from the Hand, the undead ninja organization that Daredevil has been fighting for decades. Tenfingers is defeated, Chinatown is…somewhat saved, but Lu disowns Sam to become a follower of the Hand instead. A classic Daredevil-esque pyrrhic victory, which is a pretty fitting way to bring a new supporting character into the fold, right?

Yeah, not so much. Not long after that, Daredevil and Blindspot go up against a serial killer called Muse, who gruesomely blinds Sam.

When he does, it’s to lure Daredevil into a trap. Sam’s mother Lu has taken him to the Beast, the demon that the Hand worships, and traded her soul in exchange for restoring Sam’s eyesight. In turn, Sam offers the Beast Daredevil’s soul in exchange for his mother’s. But then he feels guilty, so he comes back to rescue Daredevil — and Lu comes back to rescue Sam and is eaten by the Beast, which then teleports away.

Since then, Blindspot has been a minor ally to Daredevil whenever a big team-up happens. His last appearance was in 2018, and he’s never appeared outside of a Daredevil story.

I was so excited when Sam first appeared in 2015. Daredevil is my favorite Marvel hero, and I love mentor/protege relationships. I was looking forward to seeing Matt training a younger hero, which he’s never really done before.

What I didn’t understand was that Sam was never intended as Matt’s protege. He was intended as cannon fodder.

Daredevil as a franchise is infamous for its tendency to fridge women. Four of Matt’s love interests over the years have been killed and two have been institutionalized. But over the past couple of decades, women in refrigerators has become a much more recognized and widely disparaged trope, and it’s a lot harder to deploy without getting called out on it. Unless you change who you’re fridging.

Sam occupies exactly the same role as Matt’s fridged girlfriends, narratively. This is made blatantly clear in the issue immediately following his blinding, a splash page montage I’m not sharing because it’s quite gory. We see all of the terrible things that have happened to Matt over the years: his own blinding, his father’s death, Elektra’s murder (an image I am well and truly sick of seeing replicated ad nauseum), Karen Page’s murder (likewise), and Sam’s blinding. Like Elektra and Karen’s deaths, we’re meant to see Sam’s blinding as a terrible thing that happened to Matt, not to Sam, and add it to the list of sticks for Matt to beat himself with while not really caring what happens to Sam himself. (Again, he didn’t show up for ten issues after the Muse storyline ended.)

It doesn’t help that Sam’s debut story, the Tenfingers arc, absolutely drips with Orientalism. Tenfingers, with his gruesome, inscrutable mysticism, is a villain in the vein of Fu Manchu and the Mandarin, while Lu, in her leather crop top and thigh-highs, joins the vast ranks of superhero comics’s “sexily evil dragon lady mothers of heroes who are led back to the side of good by their white fathers/father figures” (see also: Talia al Ghul, Lady Shiva, Shado, Cheshire…). Of course, Lu is eventually horribly murdered, so a woman was still fridged along the way. Classic Daredevil!

All of this is especially frustrating because Sam repeatedly points out that as undocumented immigrants, he and people like him are constantly exploited and then forgotten by the system when they aren’t immediately useful or threatening. To then do exactly that with him as a character is maddening.

And of course, the later parts of Sam’s story all came out after the second season of Netflix’s Daredevil received plenty of well-deserved flack for its rampant mistreatment of Asian characters. Giving Sam stories where he got to be a fully realized character and not a prop for Matt’s self-flagellation would have been at least a little bit of a counterbalance. But we didn’t get it.

Sam is a charming, engaging character. He’s brilliant and talented with a huge heart. He also represents two overlapping populations that are underrepresented in superhero comics and in American media in general: Asian Americans and undocumented immigrants. How much would it mean to see stories where he gets to shine?

I still love Daredevil, and I would still love to see him actually mentor Sam. But I’d also love to see Sam in non-Daredevil books, especially ones with young characters — maybe hanging out with the Young Avengers, or Miles Morales. Instead, he’s apparently been completely forgotten — he doesn’t even appear to be included in the upcoming Marvel Voices: Identity #1, celebrating Asian and Asian American heroes and creators, although I hope I’m wrong about that.

Most of all, I’d like to see Blindspot get his own book, separate from Daredevil and all his baggage, ideally by Chinese American creators. I’d love to see Chinatown get its own protector in the Marvel Universe — if Hell’s Kitchen and Harlem have their own, why not this iconic neighborhood? I’d love to see this underused, discarded character get a story of his own, instead of being a prop for someone else, because he deserves it.

How about it, Marvel?

Previously in This Series: