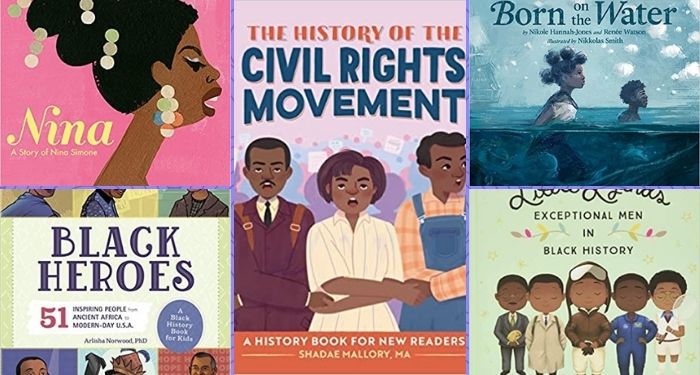 There are tons of fantastic Black history books for kids of all ages out there. It’s difficult to pare it down to one short list! So I decided to focus on books published within the last few years. Additionally, I selected books that either provide an overview of multiple key figures in Black history or focus on individuals who haven’t traditionally been in the big spotlight.

That means you won’t find books about figures like Frederick Douglass, Rosa Parks, or Rev. Dr. Martin Luther King Jr. here. (Okay, okay, I couldn’t help myself and included a Harriet Tubman book!) There are so many excellent books out there about the handful of people who have made it into the textbooks that I thought it would probably be more helpful to direct you toward some of the less widely discussed — but no less significant — Black thinkers, artists, activists, leaders, and celebrities who have influenced the course of history.

I also stuck primarily to nonfiction. You’ll find a lot of biographical works on this list and a couple of movement-centered books. (If you’re looking for fiction, there’s a ton of great stuff out there for teens! Go find yourself some Angie Thomas, Jacqueline Woodson, Nic Stone, or Jewell Parker Rhodes if this is the direction you’re seeking.)

I’ve arranged the books on this list in general order of reading ability. Part one features picture books meant for early readers, moving from a solid ABCs book to a good book for middle graders. Part two moves to more text-centered books, although it ironically concludes with a graphic novel (albeit one that can appeal to young adults and grownups alike). 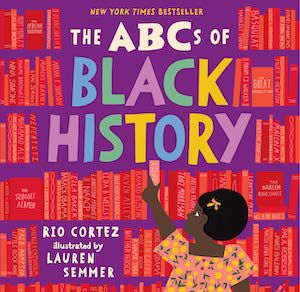 The ABCs of Black History by Rio Cortez

This is a very versatile book. When I saw that it was designed for readers ages 5 and up, I was a little skeptical. But it works because Cortez has created a great rhyming ABCs book for the little ones while also including a more detailed section at the end of the book for older readers. The back matter provides historical, biographical, and geographical context that supplements the ABCs portion nicely. Lauren Semmer’s lively illustrations add an additional appeal to this lovely book. 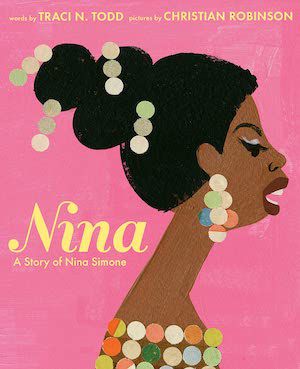 Nina: A Story of Nina Simone by Traci N. Todd

This biography for young readers (ages 4–8) is versatile. The prose is simple and effective, which younger readers will enjoy. Additionally, acclaimed illustrator Christian Robinson’s images add a sense of whimsy to this inspiring tale. The text is quite detailed, so readers with a longer attention span will appreciate the full story of Simone’s childhood, music, and role in the Civil Rights Movement. 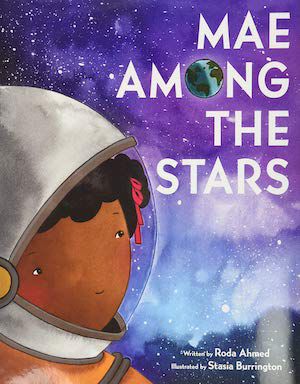 Mae Among the Stars by Roda Ahmed

Mae Jemison was the first African American woman to travel into outer space. Mae Among the Stars highlights Jemison’s curiosity and resolve. Because of this, it’s an inspirational tale — perhaps most especially for girls. At its heart, the book is about family, love, and dreaming big. Stunningly illustrated by Stasia Burrington, it’s a wonderful biography for children ages 4–8. 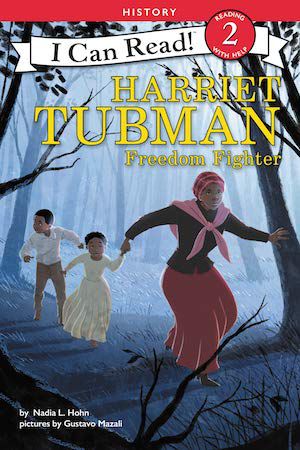 This is a great book for early readers. Designed for children who are just learning to read, it has a nice balance of short, easy sentences and detailed information. As a Level 2 text in the I Can Read! books, this compact biography will educate your young reader as well as strengthen their reading skills. The illustrations and engaging language help keep early readers’ attention. As a bonus, the book includes an actual photograph of Tubman, which is a nice touch. 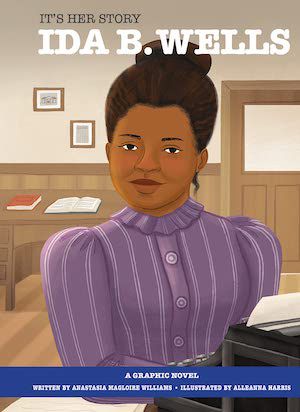 It’s Her Story: Ida B. Wells by Anastasia Magloire Williams

This graphic novel is short and sweet, making it perfect for readers aged 7–10. It’s a really accessible biography of Ida B. Wells’s life and legacy. Paired with Alleanna Harris’s appealing illustrations, this graphic novel is a great introduction to Wells’ activism and the work she accomplished during her lifetime. It also presents helpful context on the racial dynamics of the early 20th century. 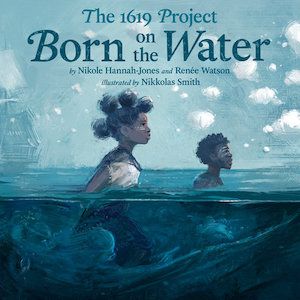 The 1619 Project: Born on the Water by Nikole Hannah-Jones and Renée Watson

There’s no way around it: this book is wonderful. The title comes from the image of enslaved people who were “born on the water.” The premise is that of a young girl who is supposed to draw out her family tree but can’t trace her family back as far as she needs to. Her grandma tells her of how their family came to be in the U.S. It’s a story of the history and consequences of slavery, of resilience and survival, of love and resistance. The combination of award-winning authors is unbeatable, and Nikkolas Smith’s illustrations are the icing on the cake. 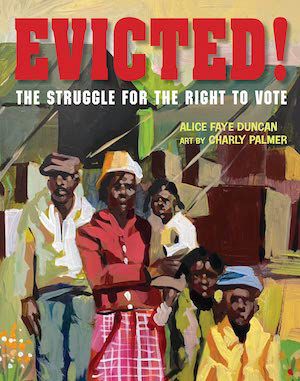 Evicted!: The Struggle for the Right to Vote by Alice Faye Duncan

Aimed at slightly older readers (ages 9–12), this illustrated book chronicles the social and political context leading up to the 1965 Voting Rights Act. Evicted! is told as a series of intertwined stories from the perspective of a young child. Duncan uses poetry and prose (as well as Charly Palmer’s striking illustrations) to convey the tale of the Tent City Movement in Tennessee. 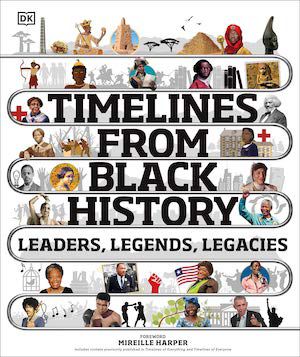 This is a DK book, so if you’re familiar with those then you will have a sense of what this book is like. It has lots of historical information and is an awesome educational tool. It’s different than many of DK’s other books in that it presents its information through a series of timelines. Some of these timelines are centered on eras or events (for instance, “Early African Kingdoms” or “The U.S. Civil Rights Movement”). Others focus on individuals (like “Mary Seacole” and “Oprah Winfrey”). This is an ideal book for developing history buffs or readers who enjoy linearity. 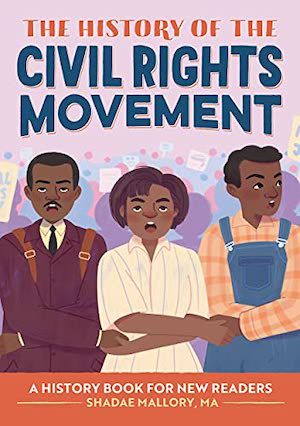 The History of the Civil Rights Movement: A History Book for New Readers by Shadae Mallory

This book is a great chapter book for kids who are starting to foray into that kind of reading. Intended for ages 6–9, the chapters are short (six to seven pages long each) and include illustrations and helpful graphics. The visuals help keep readers’ attention and the prose is lively and engaging. The book opens with a foundational overview of racism and discrimination beginning with Jim Crow laws. It moves fairly quickly from there to the mid-20th century, spending the most time on the Civil Rights Movement (as the title suggests). It connects to the contemporary era, too, and also features a glossary of key terms and a helpful timeline of events. It’s a great educational tool. 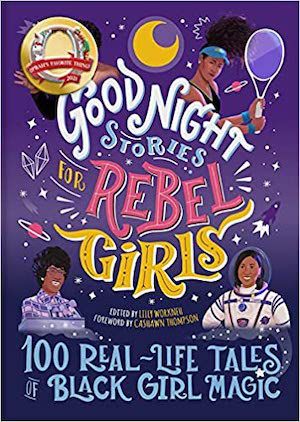 This book is part of the larger Rebel Girls series begun by Elena Favilli. Its format makes it an ideal introduction to people like Octavia Butler, Shirley Chisholm, and Angela Davis (to name just three). It includes activists, writers, musicians, intellectuals, performers, doctors, lawyers, athletes, politicians, and more. Unlike most of the other books on this list, it does not focus solely on people in the United States. In fact, the people featured in this book are from over 30 different countries. Not only does this volume tell the stories of 100 amazing Black girls and women, but it showcases work by a broad array of talented Black female and nonbinary authors and illustrators. 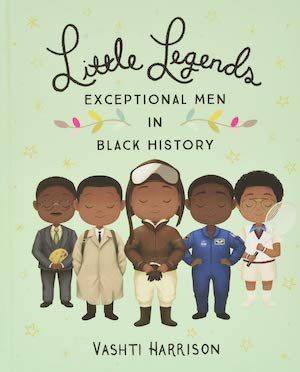 Little Legends is a charmingly illustrated compendium of exceptional Black men. Harrison indicates in the introduction that she aimed to move away from the same list of a handful of important figures. Hence, the book’s multi-century, international scope. It provides a concise yet thorough knowledge base that should open the door for further exploration. Bonus: this book is a companion book to Harrison’s previous book called Little Leaders: Bold Women in Black History. 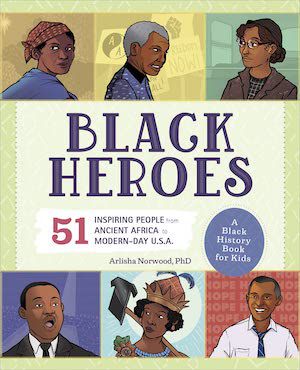 Beginning with Hatshepsut around the year 1500 BCE and concluding with Barack Obama and Venus and Serena Williams, Black Heroes is expansive. It traverses centuries and continents in its coverage of important and inspiring Black figures. Each mini biography is about two pages long and features an illustration of the biographee. It’s the kind of book you can pick up and peruse with your young reader at any pace and in any order. 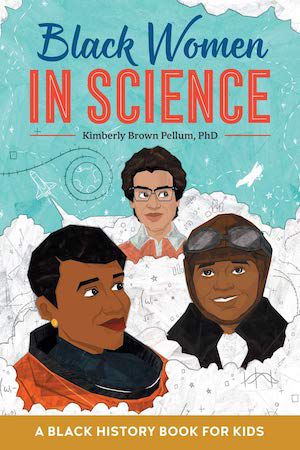 Geared toward slightly more advanced readers (ages 9–12), Black Women in Science dedicates a handful of pages to each biographical subject. It features an illustration of each person at the beginning of their section and is more text-oriented (with few to no additional images or graphics) for the duration of each biography. This allows for a more in-depth look at each scientist, which is perfect for readers who are a little more independent as well as those who are particularly interested in the subject matter. 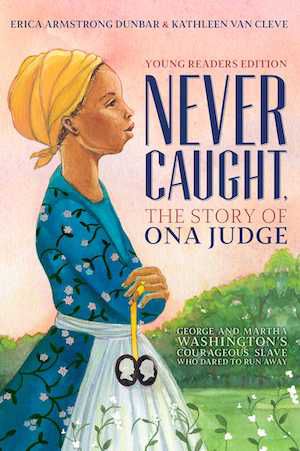 Never Caught, the Story of Ona Judge: George and Martha Washington’s Courageous Slave Who Dared to Run Away by Erica Armstrong Dunbar and Kathleen Van Cleve

This biography focuses not on George Washington as a “founding father” of the United States, but on Ona Judge. Ona Judge, an enslaved woman, made the brave decision to run away when she learned Martha Washington planned to give Judge to her granddaughter as a wedding gift. Never Caught follows Ona Judge from her childhood in the slave quarters through adulthood as she maintained her freedom in New Hampshire. This novel is aimed at kids reading at a 4th to 8th grade level. 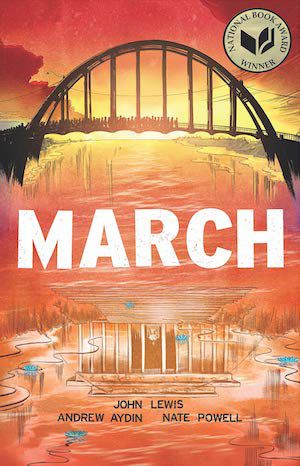 The March trilogy is the most advanced text on this list, geared toward an audience aged 13–16. This three-book graphic novel series was co-written by activist and Congressman John Lewis and Andrew Aydin. With Nate Powell’s dramatic black-and-white illustrations accompanying Lewis’s experiences of the Civil Rights Movement, it’s no wonder March garnered a slew of high-profile awards and accolades. Beginning with Lewis’s childhood in rural Alabama in Book 1, the trilogy traces the arc of his activism from lunch counter sit-ins to the famous events in Selma. It illuminates some of the highs and lows of his involvement in the Civil Rights Movement. While this is technically a YA read, it’s definitely suitable for adults, too.

In case you wanted books for adults rather than kids, consider this post featuring 10 Underrated Books for Black History Month or this post about 20 Must-Read Black American Memoirs.