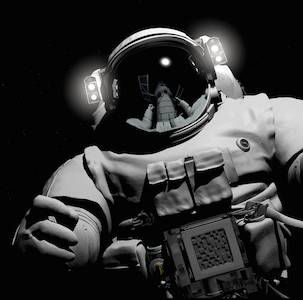 I’m generally a big fan of memoirs and biographies. I don’t read a lot by celebrities (though if you are a fan of Rob Lowe’s and haven’t read his two, I highly recommend them), but I’ll at least consider most memoirs, provided I’m interested in the subject. And there’s one subject I just cannot get enough of: astronauts.

I LOVE ASTRONAUTS. I wanted to be one when I was young (and let’s face it, I still kind of want to be one). My husband claims that the only reason I went on a second date with him was because his uncle is an astronaut (kind of true). I grew up watching Star Trek and have dreams of space; the main way I satisfy them is to read anything and everything I can about the space program. Hence, astronaut biographies and memoirs.

There are some GREAT memoirs of astronauts out there. Carrying the Fire: An Astronaut’s Journey by Michael Collins, the third man on Apollo 11 (a.k.a. the guy who had to watch Neil Armstrong and Buzz Aldrin walk on the moon from orbit), is widely considered to be one of the best, and for good reason. It’s nuanced, detailed, absorbing, and, above all, honest. For the space shuttle era, Riding Rockets: The Outrages Tales of a Space Shuttle Astronaut by Mike Mullane is amazing. He starts out the book as this cocky guy who, quite frankly, objectified, rather than respected, the first female astronauts, and I really didn’t like him. But WHOA, this book is good. It’s heartfelt, tender, and honest, and you can see the change in Mullane as he comes to know and respect his female colleagues. There were two adjectives I used to describe both of those wonderful memoirs: honest. Because really, that’s what I want from any memoir or biography: an honest portrayal of a person. It’s okay if someone I admire, such as an astronaut, has faults. I’d be shocked if they didn’t. But when I read about them, I want to get to know and understand the person they are, highs and lows, proud moments and shameful ones. That, to me, is the whole point of picking one of these books up.

In 2012, we lost two great astronauts: Sally Ride, first American woman in space, and Neil Armstrong, the first man to walk on the moon. And of course, soon after their respective deaths, biographies were announced. Both were to be written by respected veteran journalists who also had close relationships with the deceased. And both were to be written in cooperation with family members, friends, and colleagues of the astronauts.

It’s always difficult when a biography is “authorized,” which both of these seemed to be upon announcement. Often, when a family member has control over the stories presented in books, it ends up being disingenuous, painting a portrait of how they want the person to be remembered, rather than who they actually were. While family members didn’t have control in either of these cases, Lynn Scherr and Jay Barbree were close friends of Sally Ride and Neil Armstrong, respectively. Would these biographies be authentic? Would they be honest?

I had the opportunity to read both of these books pre-publication: Sally Ride: America’s First Woman in Space by Lynn Scherr released June 3, while Neil Armstrong: A Life of Flight by Jay Barbree is releasing July 8. And let me tell you, reading these books as back-to-back biographies was eye-opening because the two couldn’t be further apart. Sally Ride: America’s First Woman in Space starts with the future Dr. Ride as a young girl. It follows her through grade school and secondary school, into college, where the future astronaut seriously contemplated becoming a pro tennis player. Ride’s avenue to astronauthood wasn’t direct; it wasn’t always what she dreamed of doing, though, as Scherr points out, she’d claim that later in life when wanting to inspire youngsters. Scherr shows us the girl that Ride was, and how she shaped the woman that Sally would become.

Neil Armstrong: A Life of Flight starts when Neil was 21 years old, after a list of Acknowledgments (strangely, a list that goes on for six pages at the front of the book) that seems designed to wow the reader with a who’s who of the American space program and a puzzling foreword by John Glenn that takes up just half a page and tells you what the book is about and who wrote it, rather than imparting any personal details whatsoever (John Glenn and Neil Armstrong were lifelong friends, but you wouldn’t know it from Glenn’s words). We don’t know where Neil was from and how he grew up, or even whether or not he had any siblings. Apparently, Armstrong’s life began when he was flying planes in the Korean War.

Scherr injects herself into the narrative of Sally Ride occasionally to discuss their friendship. It’s subtle and well done, only becoming overt when Scherr laments that Ride chose to hide her twenty-seven year relationship with a woman, Tam O’Shaughnessy, from even those closest to her, including Scherr. “Her silence, I thought, was less a loss to the gay community than to Sally herself and those around her” (p. 318). It serves to both accentuate just how private a person Ride was, while also being a way for Scherr to mourn her friend. Really, it’s beautifully done and subtle, showing us how Ride was an intensely private person (as both these astronauts were) rather than repeating it over and over again. Barbree’s book, however, is just quotes and stories. It feels more like a collection of anecdotes than an actual biography. It doesn’t really have a coherent narrative arc; it feels like the stories your grandfather might tell you, jumping back and forth through time. At one point, he lists all the affiliations and degrees of the fourteen astronauts in the class after Neil’s. This also, not coincidentally at all, is the point I almost stopped reading the book. How does knowing the progression of the Mercury program (which Armstrong was uninvolved with) or the degrees of the astronauts help me to know Neil Armstrong better? The answer is: it doesn’t. And that is the problem with Neil Armstrong: A Life in Flight and the fundamental difference between Barbree’s book and Scherr’s.

Scherr’s book is an exploration, an effort to come to know and understand the woman Scherr knew and cared about. She uncovers some difficult things along the way and isn’t afraid to share them with the reader. She understands and respects the person reading the book and knows that, like her, they just want to know Sally better. Knowing that Ride had a tendency to freeze people out doesn’t make me respect her less; it makes me understand her more.

Barbree, on the other hand, is writing a legacy for his old, dearly departed friend. He’s telling stories and anecdotes collected from his time as a space journalist (Armstrong-related or not, and too often, they’re not) and gathering the remembrances of those who knew Neil Armstrong, as well as sharing his own. It’s a sweet thought, and a fitting tribute, but in the end, it isn’t a biography. It doesn’t help the reader come to know or understand this man any better.

Two biographies, written in cooperation with those closest to the recently deceased astronauts. But they’re worlds apart.*