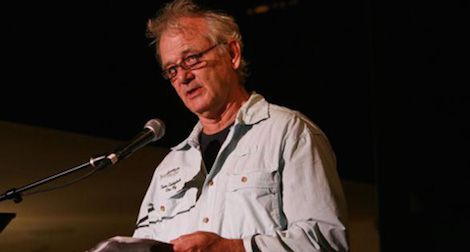 Critical Linking is sponsored by The Vale by Brian D. Anderson.

Who among us wouldn’t want the ineffably mellow, witty, and wise Bill Murray to crash their party, wedding, or White House press briefing room? Maybe you’re one of the few who could resist his comic charms. But could you throw him out if he brought along a cellist and read Lawrence Ferlinghetti’s poem “Dog”? Not I.

Murray appeared at SXSW on Monday and read the poem as part of the promotional campaign for Wes Anderson’s new stop-motion animation film Isle of Dogs. And it can seem when we look back at Murray’s many public appearances over the last few years, that the one thing he’s done more than crash other people’s parties and star in Wes Anderson films has been read poetry in public.

I didn’t know I needed a little Bill Murray reading poetry, but I did.

This month we celebrate women’s history—and today, women’s future history. What better way to highlight the amazing contributions women have made to science and culture than highlighting some of the most creative minds ever, and their surprising, thought-provoking, mind-blowing visions of tomorrow?

The history of science fiction in the Western world owes a huge debt to women.

This is an excellent list of must-read science fiction by women.

Many of you seem to agree, because in our recent survey, over 78 percent of respondents said that books have inspired their vacations. That’s some pretty compelling evidence that the written word is a powerful driving force and book tourism is alive and well, so we went in search of cities across the globe that share this love of literature. And for those of you wondering, “What is literary travel?”, stick around. From book-centric events to intelligentsia-filled cafes to rich literary histories, these places embody all things books, and you may just recognize them from the settings of some of your favorites.

For an added bonus, we’ve created ratings based on the following factors, so bookmark your top picks and make plans to see the literary travel destinations of your dreams.

My kind of travel guide.