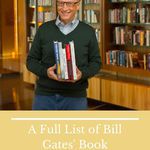 Every year, Bill Gates dedicates two posts on his blog (in summer and in winter) to his personal reading recommendations. He has focused on a certain number of books each time, providing a brief overview of why each one has stood out for him. Starting in 2014, he even began recording short videos to go with his seasonal list (check them out, starting with the first one here—they are really fun). So far, between Summer 2012 and Summer 2020, there are over a hundred Bill Gates book recommendations.

What are Bill Gates’s book recommendations?

It is an impressive list, consisting largely of nonfiction. Science and technology, medicine, business, economics, education, international development, sociology, history, biography, memoir—name it, and chances are there is at least one book in the genre. If you like nonfiction (ahem, like me), this list is plain dangerous for your TBR pile.

This shouldn’t come as a surprise—it is Bill Gates’s book recommendations, after all. He is one of the founders of Microsoft (read: a dedicated nerd and a savvy businessman), one of the wealthiest people on the planet, and, together with his wife, a known philanthropist. This reading list perfectly reflects his life’s work and interests. It consists of thought-provoking books, and chances are that at least one title from it will grab your attention.

Of course, it is not perfect. The list is a stark reflection of the lack of diversity in many of the fields showcased here, especially in STEM, but also (although to a lesser degree) in the arts and humanities. Also, if you are not into nonfiction, there are notably fewer choices in this list for you.

Despite the above-mentioned problems, I recommend looking through this list of Bill Gates’s book recommendations. Chances are that there might be at least one read that will grab your attention. And remember: if you do not find a title of interest, or would like even more diverse, custom recommendations, our biblioligists at TBR, a tailored book recommendation service, would love to help you find your next perfect literary match. We may not be Bill Gates, but we send new books and recommendations specifically matched for you! Happy reading!

Note: On a few occasions, Gates had certain titles repeat from one list into the next. For the sake of avoiding repetition, I have removed any repeating titles and marked the section where I have done so with a (*).

The Choice: Embrace the Possible by Dr. Edith Eva Eger
Cloud Atlas by David Mitchell
The Ride of a Lifetime by Robert Iger
The Great Influenza by John M. Barry
Good Economics For Hard Times by Abhijit V. Banerjee and Esther Duflo
The Martian by Andy Weir
The Rosie Project by Graeme Simsion
The Best We Could Do by Thi Bui

Leonardo da Vinci by Walter Isaacson
Everything Happens for a Reason and Other Lies I’ve Loved by Kate Bowler
Lincoln in the Bardo by George Saunders
Origin Story: A Big History of Everything by David Christian
Factfulness by Hans Rosling, with Ola Rosling and Anna Rosling Ronnlund

The Best We Could Do by Thi Bui
Evicted: Poverty and Profit in the American City by Matthew Desmond
Believe Me: A Memoir of Love, Death, and Jazz Chickens by Eddie Izzard
The Sympathizer by Viet Thanh Nguyen
Energy and Civilization: A History by Vaclav Smil

Seveneves by Neal Stephenson
How Not to be Wrong by Jordan Ellenberg.
The Vital Question by Nick Lane
The Power to Compete by Ryoichi Mikitani and Hiroshi Mikitani
Sapiens by Noah Yuval Harari

Hyperbole and a Half by Allie Brosh
The Magic of Reality by Richard Dawkins
What If? by Randall Munroe
XKCD by Randall Munroe
On Immunity by Eula Biss
How to Lie With Statistics by Darrell Huff
Should We Eat Meat? by Vaclav Smil

Capital in the Twenty-First Century by Thomas Piketty
How Asia Works by Joe Studwell
The Rosie Effect by Graeme Simsion
Making the Modern World: Materials and Dematerialization by Vaclav Smil

The Box by Marc Levinson
The Most Powerful Idea in the World by William Rosen
Harvesting the Biosphere by Vaclav Smil
The World Until Yesterday by Jared Diamond
Poor Numbers by Morten Jerven
Why Does College Cost So Much? by Robert B. Archibald and David H. Feldman
The Bet by Paul Sabin

The World Until Yesterday: What Can We Learn from Traditional Societies? by Jared Diamond
The Box: How the Shipping Container Made the World Smaller and the World Economy Bigger by Marc Levinson
However Long the Night: Molly Melching’s Journey to Help Millions of African Women and Girls by Aimee Molloy
How Children Succeed: Grit, Curiosity, and the Hidden Power of Character by Paul Tough
Japan’s Dietary Transition and Its Impacts (Food, Health, and the Environment) by Vaclav Smil and Kazuhiko Kobayashi
Made in the USA: The Rise and Retreat of American Manufacturing by Vaclav Smil
Whistling Vivaldi: How Stereotypes Affect Us and What We Can Do (Issues of Our Time) by Claude Steele
Patriot and Assassin by Robert Cook

Moonwalking with Einstein by Joshua Foer
One Billion Hungry: Can We Feed the World? by Gordon Conway
A World-Class Education by Vivien Stewart
Academically Adrift by Richard Arum & Josipa Roksa
This Time is Different: Eight Centuries of Financial Folly by Carmen Reinhart & Kenneth Rogoff
The City that Became Safe: New York’s Lessons for Urban Crime and Its Control by Franklin Zimring

The Better Angels of our Nature by Steven Pinker
The Quest by Daniel Yergin
Deng Xiaoping and the Transformation of China by Ezra Vogel
The Cost of Hope by Amanda Bennett
Behind the Beautiful Forevers by Katherine Boo
Limits to Growth: The 30-Year Update by Donella Meadows
Abundance: The Future is Better Than You Think by Peter Diamandis and Steven Kotler
Thinking, Fast and Slow by Daniel Kahneman
The Man Who Stayed Behind by Amanda Bennett