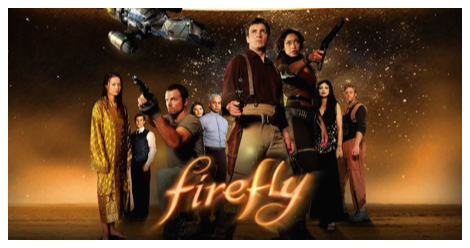 Where are my fellow Browncoats? I know you’re out there, fighting the good fight against the Trumpsters. I mean, the Alliance. I’d ask if there is really a difference between the two, but the Alliance, at least, seemed to have some elegance about them. And they didn’t argue about giving healthcare to its citizens; you got it, whether you liked it or not, dammit, and maybe some experimentation done on you while we’re at it. Two by two, hands of blue…

From the first episode of its tragically short life, I was captivated by Firefly. Even though it only had 13 episodes, it still launched itself into my top favorite shows, ranking right up there with Star Trek and The X Files. It was such a fun space western, with tight, funny writing, and characters we loved and cared about – even that trained ape without the training, Jayne. Right away, viewers wanted to know why Mal was so bitter, if Shepherd Book really was a shepherd, what had happened to River, and how in the ‘verse did Zoe and Was end up married? Talk about opposites attracting.

From train heists on Outer Worlds to boosting a shitload of medical supplies from right under the Alliance’s nose on a Central Planet to helping a brothel of whores give a good comeuppance to a corrupt sheriff, Mal and the crew of Serenity will take on just about any job they can get. Assuming the pay is worth it, of course. Except when they decide to do it to stick it to the Alliance. Or because it’s the right thing to do. I swear by my pretty floral bonnet, they have an interesting sense of morality and honor, our crew.

If you have a Serenity-shaped hole in your heart and miss flying into the black with your quirky little crew, here are a few books that have a little of the same feel to them as our beloved show.

Leviathan Wakes by James S.A. Corey: An ice miner and a detective have to deal with the Earth government and the very different rule of the Outer Planet revolutionaries in the Belt. One little ship might make a huge difference – sound familiar, Browncoats?

Sassinak by Anne McCaffrey and Elizabeth Moon: Sassinak was orphaned by space pirates as a kid, and now all she wants to do is destroy them. You guys – space pirates!

Ignition City vol 1 by Warren Ellis. Basically, a western steampunk in space! How is this a bad idea?

The Beast Master by Andre Norton: It has a sort of Earth-That-Was, a guy who takes a job to kill another guy he’s never met, truces that aren’t really truces, and people getting caught in the middle when it all goes sideways. So, like a typical day for the crew of Serenity.

Lightless by C.A. Higgins: The future isn’t shiny, and resistance is spreading. A couple dissidents get on board a top secret spaceship and then the fun ensues.

Vermillion by Molly Tanzer: Weird Western steampunk takes on darker tones when the protagonist takes off to the Rockies to see what happened to a group of Chinese laborers. He learns that their destination has a super dark secret that no one realized.

Trading in Danger by Elizabeth Moon: I know I listed Moon up above, but this is a really fun book, and she wrote it by herself. This is kind of more of a “what would happen if, say, Zoe was still working for Mal but decided to join the Alliance to get inside information on them?” Kylara’s family has a major shipping business but she wants to be in the military, which everyone can agree would be an asset. But of course she screws it up.

The Rime of the Ancient Mariner by Samuel Taylor Coleridge. Oh captain, our captain – see what I did there? – has read a poem before, and calls River the little albatross. Of course you should read this poem in honor of Mal’s .

What others might Captain Tightpants secretly have stashed next to his book of poetry?