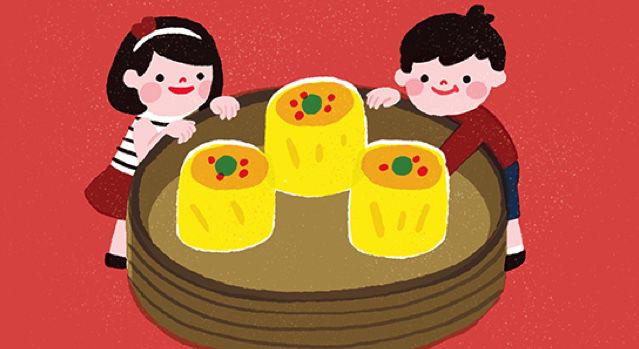 As the parent of a small child, I read a lot of children’s books. Since said child is two years old, most of the books we read are of the board variety. And as someone who has been writing about children’s books for the past year for the site Baby Librarians, I’ve come to realise a few things about my own board book preferences — and where the market is sometimes lacking. I love books that are beautifully illustrated, are fun to read aloud, capture my interest and attention as an adult, and where I can also see myself, my child, or my family in the story and characters. This is actually quite a tall order and not one that is easily fulfilled.

One of my favourite things to read about is food, both in terms of adult books and children’s books. Happily, there are a lot of delightful children’s books out there that are either about food or where food is a focal point. But there still weren’t any that fit my wishlist of a beautifully illustrated, good read-aloud, where I can see myself or my child in the book. And then I came across the Big Cities Little Foodies series, and it turns out the creators of that series, Cheryl Yau Chepusova and Isabel Foo, felt similarly to me and instead of just moaning about the books they wish existed but didn’t, they actually went out and created the books. They were kind enough to answer some questions I had about the books and how they developed the series.

A post shared by Big Cities Little Foodies (@bigcitieslittlefoodies) on May 4, 2019 at 8:51pm PDT

The Big Cities Little Foodies board books use food as a way to explore different cities across Asia. The first in the series is Hong Kong, and they use classic Cantonese dishes to introduce the concept of numbers. The board books began as an idea to create something for their children, and when I asked them what their children’s response has been to the books, this is what Cheryl said:

‘Adeline loves picking up her copy off the bookshelf and is thrilled to see herself as a character in the book. When we eat something that’s represented in it, she’s really proud that her real life is reflected in her bedtime stories later on. Her response is really why we felt it was important for us to create the series in the first place. For a lot of Asian or part Asian children like Adeline and Nolan, their heritage and culture is often not explored in children’s literature (especially in the board book format) even if a character on the page looks like them. When we became moms, we saw characters illustrated with black hair and yellow skin depicted in children’s books, and sometimes stories of lanterns or dumplings or festivals were also included. But Asia is vast and there are so many varying nationalities and languages in the region, and not all Asian children identify with the same stereotypes. We won’t be able to cover all of them in our series, but we do hope to draw more attention to cultures and cuisines that aren’t as mainstream. For a start, we’ve had amazing reception to our book locally in Hong Kong and from Cantonese families all over. We hear from our readers all the time that they can see themselves or their relatives in our book.’

Cheryl’s response is something I really related to, and I think it is partly why I love the book so much. The book is very specific in its ‘Asianness’, and the specific part of Asia it highlights is something I’m yet to find in any other board book (and we own other food board books about dim sum). The dishes depicted in this book are ones I remember eating with my parents as I was growing up, and are also the ones that I rarely eat now that I have left home and moved to the other side of the world.

The process of creating your own board book can be challenging. I’ve come to realise that there are a lot of mediocre children’s books and board books out there, and not a lot that have that magic — that certain something that makes you think, yep, this is a book I definitely want to keep for my grandchildren. Writing a kid’s book is not easy. Cheryl explained the process behind creating Big Cities Little Foodies:

‘We started with cities we were very familiar with and we haven’t had to deliberately plan any research trips for the books so far. Since starting the project, we’ve both been back to Hong Kong 2–3 times each for personal leisure, and Cheryl recently visited Tokyo as well for a wedding. We also check with local friends in those cities and buy books in the native languages.

For our first book, we recruited little readers aged 18 months to 4 years old and asked their parents to read a draft of our book to them out loud, to see which illustrations they were most drawn to and what both the child and parent liked most about it. It helped put our rhyming and word choices to the test too with a young audience. It was a great exercise and we received feedback from toddlers we didn’t know personally. We plan to do the same with the next book as children have the most honest and insightful responses.’

This process seems to have worked, at least for me and my toddler. They are great for reading aloud, but what I love most about the books – besides seeing the foods of my childhood and family represented – are the illustrations. Cheryl and Isabel are both designers, and they drew inspiration from not only traditional children’s picture books but also from other art and design sources:

‘We didn’t look at children’s books exclusively, but found our inspiration from graphic design, printmaking, and illustration. We were really drawn to risograph prints early on, particularly the work from the Dutch studio ‘we are out of office.’

I asked them about their favourite children’s books and illustrators, and Isabel said, ‘We both really love classic children’s books, the ones we grew up with ourselves. Dear Zoo by Rod Campbell, Brown Bear Brown Bear by Bill Martin Jr., Where’s Spot by Eric Hill. Illustrators I love include Lisk Feng, Yamauchi Kazuaki, Pearl Law, Jon Klassen, and Justine Wong. They’re not all children’s book illustrators, but they do such amazing, joyful and fun work. They definitely have inspired my illustration style for this book and overall.’ Cheryl added, ‘Some of my favorite illustrators are Taro Gomi, Ekaterina Trukhan, Aurora Cacciapuoti, and Susie Hammer. We own books by all of them.’

Specifically on the topic of food in children’s books, Isabel mentioned some of her favourites:

‘We loved exploring food books with our children, and between Cheryl and I. As we both have graphic design backgrounds, we share a love of books. We would text each other any time we found a book we thought either of us would enjoy. Some of my personal food illustration favourites are The Very Hungry Caterpillar by Eric Carle, Dr Seuss’ Ten Apples Up on Top with art by Roy McKie, and Let’s Eat by Gyo Fujikawa. The ‘Cook in a Book’ series by Lotta Nieminen is also fun.’

A post shared by Big Cities Little Foodies (@bigcitieslittlefoodies) on Aug 12, 2019 at 8:55am PDT

The next book in the series, out in 2020, will be Tokyo and it will introduce the concept of colours. Cheryl talked about how the cities were decided and what’s in the future for the series:

‘We started with a book about numbers, and we knew the next learning concept to introduce would be color. It was really easy to identify Tokyo as the next destination for our color book due to the vibrancy of both the city and the food. Traditional Japanese cuisine (also known as washoku) is made with the principle that every meal should include five colors: red, yellow, green, black, and white. Each meal incorporates this concept and comes together for a harmonious presentation. For example, yellow is often represented naturally by an omelette, corn, or kabocha squash, while black can be found in the form of seaweed sheets, black sesame seeds, or shiitake mushrooms. Knowing that Japanese food already lends itself to be so colorful, we felt a Japanese city, especially one as energetic as Tokyo, would be the right choice to introduce color to our readers.

Our goal is to expand the Big Cities Little Foodies series to three cities, and we have an idea of where the next destination will be, as well as the concept we want to explore. We frequently get suggestions like Taipei and Singapore from our readers too. If there’s enough interest after we complete the set of three, we may continue to explore more cities in the region. For now, we’re planning for one more book after Tokyo.’

This is rather exciting news — I am eagerly anticipating the second book in the series, and can’t wait to see what they have in store for the third book. The first book is one I really enjoyed sharing with my toddler, and the series concept brings together a number of things I love: food, travel, exploring other cultures through food, and beautiful design. This is one that will go in the pile for hypothetical grandchildren.