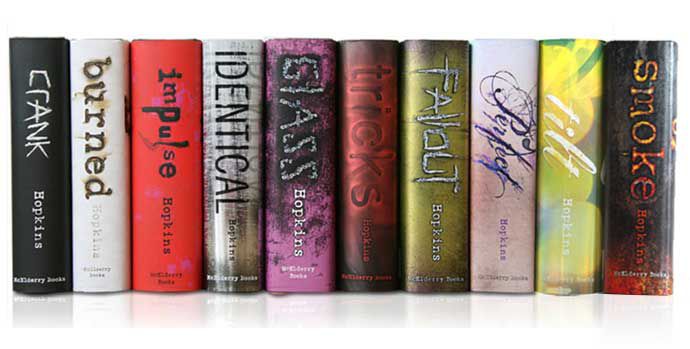 Ellen Hopkins is not only a New York Times Bestselling author, she’s a perennially popular author. No matter how many copies of her books I have at the library, I end up having to purchase more copies because they end up disappearing and/or the demand for her books continues.

One of the things I love about readers who love Ellen Hopkins, though, is that most of them are so open and eager to trying books that are like hers but written by other people. It’s not that fans of other books aren’t that way, but in my experience, it’s easy to pinpoint exactly what it is readers love about Hopkins’s books. Making a recommendation becomes fun because you know there’s going to be a satisfied reader who then goes on to find other books and authors to become just as passionate about.

The books Hopkins writes have staying power, and they’re the kind of books that readers just coming into YA or those who are seasoned YA readers continue to pick up because she’s got a way of telling a compelling story that never feels trite, overwrought, or overly dramatic. Her characters are put through hell, and while much of the time they’re able to come out of it, one of the more satisfying elements of her books is that sometimes, they don’t. Sometimes, there isn’t a light at the end of the tunnel for all of the characters, which showcases her honesty and authenticity to not just the story, but to life itself. Things get ugly, and despite how much you want for it to get better, sometimes it just doesn’t.

As usual, all of the books recommended are titles you won’t find on the best sellers list, though many have earned distinction and acclaim, and your mileage may vary — no one will ever be the next Ellen Hopkins because we’ve already got Ellen Hopkins.

Try One Of These Authors (or Books) Next

Anyone who is interested in realistic YA fiction that’s edgy and honest but hasn’t yet picked up a Courtney Summers book is missing out. What Goes Around is a bind-up of Summers’s first two novels, Cracked Up to Be and Some Girls Are, which are perfect next reads for fans of Ellen Hopkins. Both feature complicated — “unlikable” — female characters who are working through a host of tough issues. There’s no blacking out here, no glossing it over. They’re brutal and ugly. Though they’re written in a more traditional narrative style than Hopkins’s, Summers can write and there’s something poetic at the sentence level. These are fast paced and blistering and at times downright tough to read.

To date, Chaltas has written two books, Because I Am Furniture and Displacement, but both make excellent reads for fans of Hopkins. Like Hopkins, both books tackle tough subjects (abuse and running away from home, respectively) and they’re written in verse. The verse isn’t written in quite the same way as Hopkins, but the styling works for each story and doesn’t compete against it, helping make the voices of the main characters memorable. The desperation in both novels should resonate with readers of Hopkins who appreciate that within her novels, too.

Ayarbe writes in a more traditional format than Hopkins does, but her stories have great appeal to fans of Hopkins. They take on tough topics, with unflinching honesty, and they do so without speaking down to either the characters or the readers. Wanted, Ayarbe’s most recent novel, could be likened a bit to a Bonnie & Clyde alike for YA readers, and one of the elements that makes it a nice next read for Hopkins fans is that it is set in Nevada in a world that’s desolate and very “western.” Many of Hopkins’s novels are set in this area (whether actually in the desert or not) and that setting furthers the voices, stories, and edge to her novels.

But I won’t stop there. There are a LOT of great next reads for fans of Ellen Hopkins, and once you start down the road of YA fiction in that vein and find you love it, it’s hard to stop. Here’s a short list of authors and books for those ready to go further:

And even though it’s a bestseller in its own right (and has been for a very long time), Jay Asher’s Thirteen Reasons Why is a natural read alike for Hopkins, too.