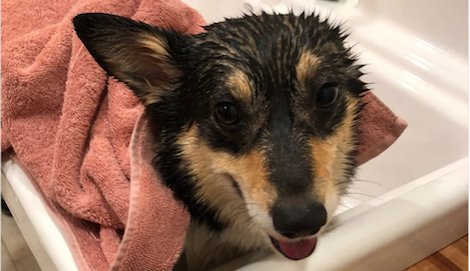 This post is sponsored by Shipwreck, Saturday October 6 at NYCC! 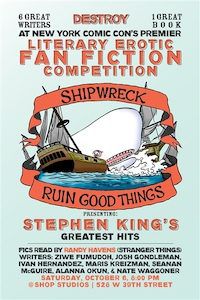 Beloved San Francisco-based literary fanfiction competition Shipwreck returns to New York Comic Con on Saturday, October 6th at Shop Studios. Seven great writers write fanfiction about six of Stephen King’s greatest, terrifyingest, coke-iest hits: Carrie, Christine, It, Misery, On Writing, and The Shining. Those stories are read aloud in front of a live audience by Randy Havens (Stranger Things, Archer). You vote for your favorite before we reveal who wrote what, and the winner is cast off from polite society.

As you might know from listening to me talk about it on Get Booked or SFF Yeah!, I am not much of a horror reader. (And by not much I mean, basically not at all, with the recurring exception of Lauren Beukes.) But in the name of Highly Classified Projects, I have recently done a dive into Stephen King’s work—and his Twitter feed. And while you’ll get to hear my thoughts on his books in a forthcoming [redacted for reasons of classified], I think it’s very important to acknowledge the best things he has ever written: tweets about his Corgi Molly.

While these tweets are basically short stories already, am I alone in wanting actual short stories about the Adventures of The Thing of Evil? I feel sure I am not! While we eagerly await that happy publication day, I give you the best tweets about Molly, the most horrifying Corgi in the world, from 2018.

Molly, aka the Thing of Evil, says, "You can cleanse my body, Steve, but you will never cleanse my black soul!" pic.twitter.com/H2wPWx82M9

[Photo: A black, white, and tan Corgi in a white sink, fur damp and left ear bent back, gazing directly at the camera.]

I think what particularly makes this one is the bent ear, and that gaze promising all the future hijinks/torture.

Molly, aka the Thing of Evil, takes a break to refill her bile ducts and the anger organ that serves as her heart. pic.twitter.com/LemEtY3BVc

[Photo: A black, white, and tan Corgi with a red collar, curled up on a beige doggy bed with a little blue towel tucked over her tail.]

The photo itself is great, but the caption on this one is really what makes it. Well done, sir.

Molly, aka the Thing of Evil: "Yeah, okay, I'm dirty. And wet. Big damn deal. Because that Frisbee is dead, do you hear me? That blue plastic SOB is DEAD! I killed the bastard! Gone, got it? GONE! Sleeps with the fishes!" pic.twitter.com/Fy57cJBh8O

[Photo: A shot looking down at a clearly damp black, white, and tan Corgi gazing off to the viewer’s right, tongue sticking out.]

That manic gleam in her eye? It will haunt me the rest of my days.

Banned from Petco (and doesn't give a shit). pic.twitter.com/I2XkSspoAK

[Photo: A black, white, and tan Corgi sitting in front a refrigerator on a gray tile floor, looking sassily at the camera.]

BRB, turning this one into an “Out of f*cks” meme…Also! What horrors did she perpetrate at Petco!? I MUST KNOW.

Molly, aka the Thing of Evil, promises not to tear my throat out if I let her clean out the ice cream carton. Claims vanilla "is good for dogs and causes pure thoughts." pic.twitter.com/eb2ICFr3Gt

[Photo: a black, white, and tan Corgi has her head buried in a pint carton of ice cream, being held by Stephen King, with just her ears sticking out.]

I have a cat who is made of Evil and would very much like to know if this vanilla theory a) is true and b) works on felines.

Molly, aka the Thing of Evil, begins her mission to kill winter. pic.twitter.com/VEpZTWlcgi

[Photo: a black, white, and tan Corgi stands in a snowy area. Her face and nose are covered in bits of snow, and she’s looking directly at the camera.]

This one makes me wish for a Game of Thrones cameo for Molly. All men must die—but Corgis are not men!