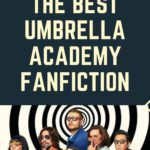 So, you’ve already marathoned all of season two of Netflix’s highly successful series The Umbrella Academy. Now what? (This is why you should never marathon too much of a good thing, but I’m not your mother).

Unfortunately, season 3 has yet to be confirmed, but given the end-of-season cliffhanger as well as the series’ popularity, we’re sure to see Allison, Ben, Klaus, Luther, Number 5, Vanya, and Diego again at some point. Of course, in the age of COVID-19, nothing is a sure thing anymore…

But there is good news! There are ways to get your Umbrella Academy fix immediately. Of course, there’s always the Umbrella Academy comics on which the show is based. But if you want to read something right now, as in, just a click of the mouse away, may I suggest the wonderful, wide world of Umbrella Academy fan fiction?

You can read about the many times you caught Diego without his shirt on, or the time you and Number Five traveled to the Apocalypse together, or the AU where Reginald Hargreeves is a feared pirate captain.

Whatever you might want, these Umbrella Academy fan fiction authors deliver. Happy reading!

Post–season 2, Vanya figures out how to be a sister again. The learning curve is pretty steep when you have brothers this weird. [Complete, one chapter, 10,516 words, General Audiences]

The Moment That They Knew by Meg596

The one in which Five takes a serum to age his body up and accidentally becomes soul bound with Diego. [Ongoing, three chapters, 8,677 words, Explicit]

You Better Bring an Umbrella by Firewhisperer13

Following the death of her father, Mina Hargreeves returns home, reuniting with her siblings for the first time in ages. From the moment they’re back under the same roof, things seem off, and the reappearance of a missing sibling marks a series of events in motion that leads to the Hargreeves attempting to stop the end of the world. [Completed, 226 pages, No rating]

You Better Bring an Umbrella Vol. 2 by Firewhisperer13

Trapped and scattered across Dallas in the early ’60s, the Hargreeve siblings have to gather to prepare themselves to stop yet another doomsday scenario. But being stuck in a time they don’t belong in proves to present more problems than previously assumed, and they may find ripple effects easier to create than they are to fix. [Ongoing, 32 pages, No rating]

The Five Times You Saw Diego Shirtless by humorous

For something you never intended on happening, it sure happened a lot. [Ongoing, one chapter, 1,414 words, Explicit]

When Howard Stark dies, his five remaining sons and daughters reunite for his funeral, one having vanished and one being dead. It’s a bittersweet, mostly bitter reunion. But when their missing brother appears, babbling about an apocalypse, the Starks must figure out how to get over their trauma and band together in order to stop it.

Or: The Umbrella Academy AU that no one wanted but I wrote anyway. [Ongoing, four chapters, 7,218 words, Unrated]

You are the eighth Hargreeves sibling. The day Five attempts to time travel you go with him. An accident sends you both into the Apocalypse. [Ongoing, three chapters, 4,936 words, Teen]

Five’s Day Off by Skaurple

Arriving back home, Five decides to take a day off to experience life without an impending apocalypse to worry about. The only problem being, his panicked siblings are on a manhunt for him around the city. Sure, the Umbrella Academy ceased to exist, but it wasn’t a problem that needed immediate attention, right? [Ongoing, two chapters, 6,821 words, Teen and Up]

I heard a rumor… by Zoe-oeZ

When Five landed in the apocalypse, he’d expected things to stay dead. He expected to get home to his family and be greeted with warm hugs and tears, with his siblings gathered around telling him stories about pranks they got away with and what other ridiculous training exercises Reginald came up with…he expected for everything to go right back to normal, with only his spacial jumps and time traveling abilities dancing underneath his fingers like they always were.

Nothing ever goes his way though, does it? [Ongoing, one chapter, 3,402 words, Teen and Up]

A Notion for Violence by Diego Hargreeves (really!)

Maria Gutierrez only knows how to do one thing, and that’s fighting. When she becomes involved the life of her new gym partner, Diego, things get more complicated. She needs to learn a lot more than just how to throw a good punch. [Ongoing, 37 pages, No rating]

Love’s a Glitch by sparkle123tt

At 58 years old, the chestnut brown hair she’d known for all her youth faded into a shining silver. To the elite commission assassin, fittingly labeled as the Glitch due to her ability to control electricity, it was a clear sign that it was time to retire. Just two years shy of 60 she fully planned on kicking back and relaxing, but first she has to kill Five Hargreeves. [One chapter, 1,527 words, Rated K (Suitable for Most Ages)]

Vanya: The Not So Ordinary Sibling by Coolbird13

Vanya hated it. Hated the fact that she could never play with her siblings when they went on missions, could never play with her siblings in general, all because she was labeled ordinary, weak, and defenseless. The only thing really special about her was her pills that her father made her take. For her supposed anxiety. Vanya glanced at her pills in her hand and scoffed. She didn’t ever remember having anxiety, but, Vanya muses, she has been taken them so long, she hardly would know, would she? [Ongoing, one chapter, 890 words, Not rated]

Back to School by JulietteWinter

When they arrive in 2019, nothing changes except for the fact that the apocalypse didn’t happen, and Ben is alive (as a ghost). But now Five has to face a new problem: school. [Two chapters, 3,464 words, Teen]

Room to Breathe by ViridescentShade

The Umbrella Academy returns to 2019 to find an empty, dusty mansion with portraits of unfamiliar kids on the walls and a series of cryptic notes from a father who has vanished. While they must piece together the changes they have made to the timeline and the paradox of their own existence, that is not the whole story. Between their search for answers and adjusting to their new lives, they find time to rest and become the family they always could have been. [Ongoing, two chapters, 4,560 words, Teen and Up]

Can We Keep Him? by actlikesummer

Klaus comes stumbling into the house injured and sad and with a new friend. Diego’s never going to hear the end of this. [Completed, one chapter, 1,612 words, General Audiences]

Reginald Hargreeves was the notorious captain of the feared Umbrella Pirates—he was ruthless, mysterious, and fully untrusting of any and everyone. So untrusting, in fact, that his crew was made up of seven orphans, whom he picked up and raised as his own—there was no way they would betray their own father, after all. (The Umbrella Academy Pirate AU) [Ongoing, one chapter, 1,970 words, General Audiences]

The Umbrella Academy fanfiction nobody asked for in which the Hargreeves siblings wrestle over a desk fan. [Completed, one chapter, 941 words, Teen and Up]

Six-ish times Klaus managed to make Ben corporeal for his siblings to see and chat…and one time he couldn’t. Season 2 compliant. (Mostly.) [One chapter, 1,989 words, Rated K+ (Some content may not be suitable for young children)]

Moments after the Umbrella Academy finds out about the Sparrow Academy Reginald gives the order for them to attack. The Hargreeves siblings are on the run, they have to lie low and figure out what to do next. They also have to take care of the brother who gave them time to get away. [Completed, seven chapters, 18,672 words, Teen and Up]