The best true crime books are the ones that leave you feeling a multitude of ways. You may feel disgusted, nauseous, indifferent, torpid, or even lifeless. However, some readers of true crime might not even feel this way. They may coast through a book and not feel much. This isn’t because they are monsters (or are they?), rather, they might just not be as emotional as I am. I like a book that moves me to genuinely feel something. If a book doesn’t have that effect on me, more often than not I will say the book just wasn’t that good.

Once I have completed a great true crime book, I will tell myself that it was the last one I will read. I try to convince myself that I have read enough for my lifetime. But who am I kidding? A couple of months after the disgust had subsided, there I am starting up a new one. I can’t help being drawn to these kinds of books. They are my guilty pleasure and I will continue reading them for as long as I live. It was laborious thinking about the best ones I have ever read, but I managed to compile a small list. Without further ado, here are the best true crime books I have ever read. 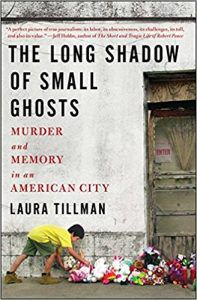 The Long Shadow of Small Ghosts: Murder and Memory in an American City by Laura Tillman

This one hit home because the crimes occurred not far from where I was born and raised. Brownsville, TX, a border town just north of the Mexican city of Matamoros, is stricken by rampant poverty and has the ability to perplex anybody who does not understand the Deep South Texas border. But this misunderstanding is what makes this book a great read. It was written by someone who is not from the region. Award-winning journalist and former reporter of The Brownsville Herald Laura Tillman poured her entire existence trying to comprehend it all. Tillman does not shy away from explaining to readers that she too was perplexed about the entire border dynamic and the mentality of the couple who committed the heinous crimes. She takes readers down a harrowing journey describing the murders (murders that are too graphic to discuss) committed by John Allen Rubio and Angela Camacho. Truthfully, this book broke my heart. I could not believe something so appalling could happen near where I grew up. Several times I had to put the book down and recover from the madness I was reading. This one is not for the squeamish. If you enjoy a genuine true crime book, then I recommend this one for sure. 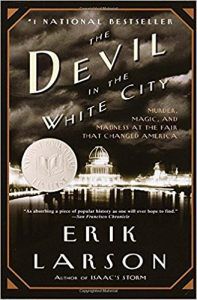 The Devil in the White City: Murder, Magic and Madness at the Fair That Changed America by Erik Larson

I am sure this book tops a lot of great reads lists, and for good reason. If you are not familiar with Erik Larson’s work (Dead Wake, In the Garden of Beasts, Isaac’s Storm & Thunderstruck), then I suggest you start with this one. Larson is a master of research. His writing has the ability to hypnotize you, leaving you unable to put his books down. The Devil in the White City is about the sadistic serial killer H.H. Holmes who, during the 1893 World’s Fair in Chicago, lured his victims into his murderous world’s fair hotel while using the fair as a smoke screen. The hotel was equipped with a  dissection table, gas chamber, and 3,000-degree crematorium. The man was the embodiment of pure evil. But the book is also about a brilliant architect named Daniel Hudson Burnham, the fair’s brilliant director of works and the builder of many of the country’s most important structures, including the Flatiron Building in New York and Union Station in Washington, D.C. The book is brilliant in that it details two dynamics during the latter part of the 19th century: hard work and accomplishment from those who overcame amazing obstacles, and cunning from a man who, although evil, was charismatic and brilliant in his own sick way. If you have not read this one by now, I suggest you mark it on your “want to read” list. 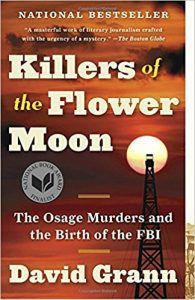 This one had been on my “to be read” list for quite a while. I kept putting it off for whatever strange reason until one day I decided it was time to read it. I was not disappointed! As an avid reader of nonfiction, this microhistory of Osage County, Oklahoma had me hooked. It was no surprise to me that Native Americans were systematically murdered so squatters could steal their lands, and in this case, their riches. What was shocking, however, was the entire plot perpetrated by the murderers and how it took years to be fully accomplished. If you are unaware,  in the 1920s, the richest people per capita in the world were members of the Osage Nation in Oklahoma. When oil was found beneath their land they became rich beyond belief. But of course, the government decided that Native Americans did not know how to spend their money wisely. It was decided that they should be assigned “legal guardians” who would ensure their money was spent “properly.” It did not take long for those guardians to steal money from the Osage Nation and then, one by one, the Osage began to be killed off. From an NPR article: “What makes these crimes so sinister is that it involved marrying into families. It involved a level of calculation and a level of betraying the very people you pretended to love.” This one is one of the best books I have ever read. I recommend you pick it up today and begin reading. 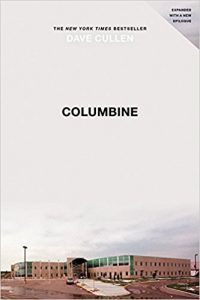 Do you remember hearing about the mass school shooting at Columbine back in 1999? I was in eighth grade and all I kept thinking was, “This could have happened at my school.” I assumed, incorrectly, that it would be a defining moment in my life. I would remember where I was when I heard about it and who I was with, but this happens so often now that my memories of that day have faded into oblivion. Rereading this book recently, however, has resurfaced some of those memories. It was recommended to me by a friend several years ago and when I first read it, I was deeply impressed with what Dave Cullen put together. He was one of the first reporters on the scene and meticulously researched the tragedy for the next decade. This read is eye-opening but has unfortunately also served, according to its synopsis, “as a template for nearly two decades of ‘spectacle murders.’ It is a false script, seized upon by a generation of new killers. In the wake of Newtown, Aurora, and Virginia Tech, the imperative to understand the crime that sparked this plague grows more urgent every year.” I recommend you check this one out.

These are my personal favorite true crime books as of now. I may think differently in a year or two but for now, I recommend you check these out and let me know what you think.