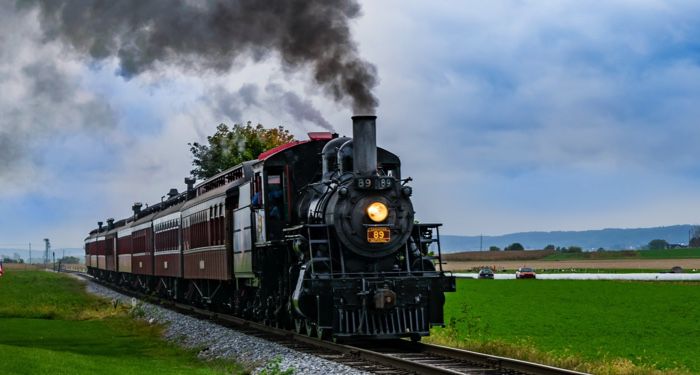 Apparently nothing else from the story actually stuck with me other than that there was some problem and the train overcame it. However, considering I heard it many decades ago, I’m pretty impressed that I have any memory of it at all. Recently, I revisited it and realized there was more to the story than the tiny parts I remember. I enjoyed it a great deal. It has an excellent lesson about persistence and believing in yourself, and it is still a good read even for an adult.

Naturally, there are far more children’s train books out there than just this one. Below is a list of some of the best I have found for your train enthusiasts. These are mostly for younger readers, but there are a few middle grade reads, too, in case you need a slightly longer train book to dig into. 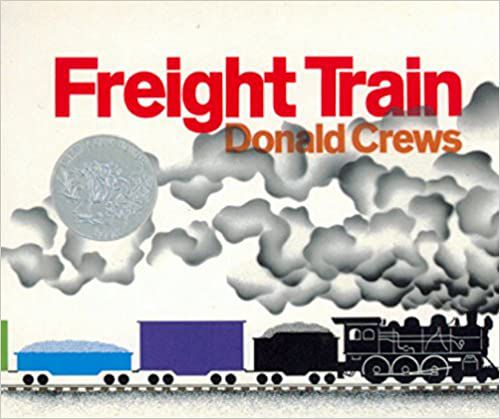 This is a Caldecott Honor book by Donald Crews that describes how trains work. A classic that belongs in any collection, the simple language and bold graphics will appeal to young readers and adults alike. It’s available as a paperback or as a board book version. 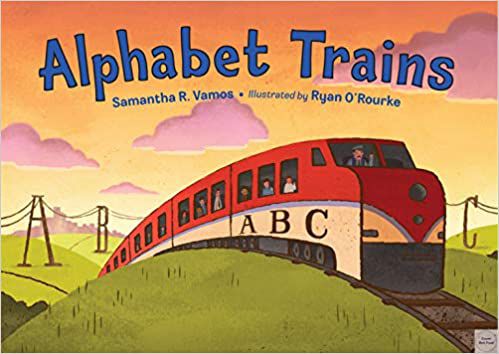 This is a great alphabet book for the train-obsessed reader with a train (from various parts of the world) matched to every letter of the alphabet. It also includes notes at the end so readers can learn a little more about each of the trains featured in the book. 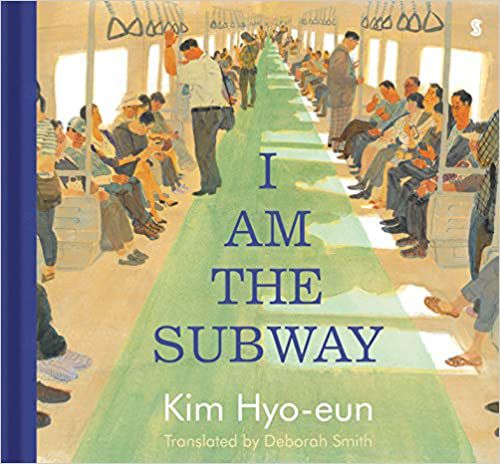 I am the Subway by Kim Hyo-eun, Translated by Deborah Smith

This is an interesting picture book that looks at the Seoul subway and focuses not only on the train, but also on the stations and on the riders. The subway is a character as are some of the people who use its cars every day. Accompanied by beautiful watercolors, this is also available in the original Korean. 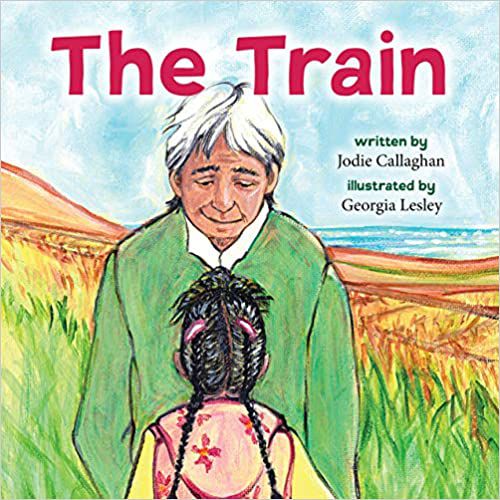 The Train by Jodie Callaghan and Georgia Lesley

This book isn’t exactly about trains so much as about what a train can take away from a community. Written by Mi’gmaq writer Jodie Callaghan and illustrated by Georgia Lesley, this tells the story of residential schools and the intergenerational trauma that followed — all in a way that younger readers can understand and absorb. The book is very moving and includes a reader’s note at the end about the over 150,000 Indigenous children who were sent to residential schools in Canada. 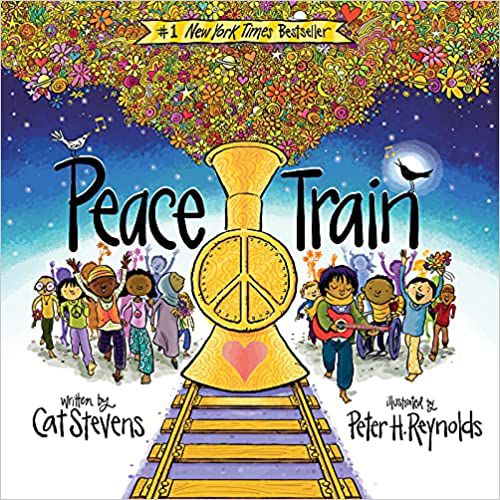 This book takes Yusuf Cat Stevens’s famous 1971 song “Peace Train” and renders it in book form. It’s full of beautiful illustrations and has a timeless message of hope. If you’re not entirely sold on the idea, you can even listen to Stevens sing the book here and make your own decision that way. 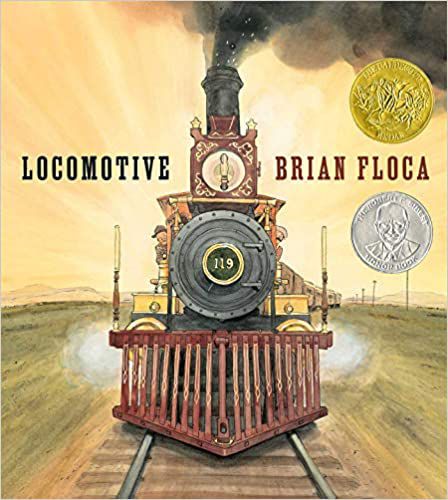 This book is a Caldecott Medal winner that takes a more historical look at the locomotive and the experience of a family riding the train in the 1860s. Although I don’t love that the train is referred as “she” (with a male engineer who “knows her moods and tempers”) and feel there are some missed opportunities in the text, there is a lot to appeal here to readers who want to learn more about how trains were used in the past. 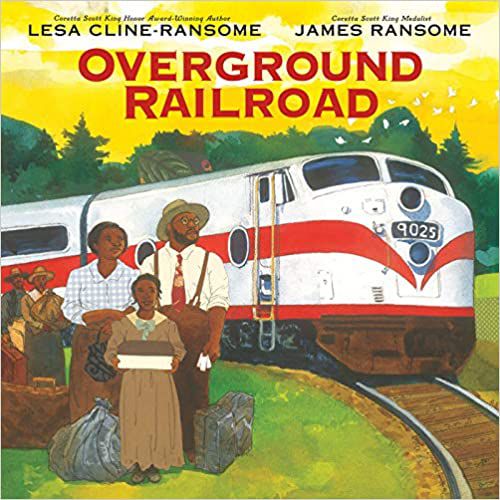 This follows a girl, Ruth Ellen, as she makes her way with her family from the rural U.S. South to New York City as part of the Great Migration, which occurred from about 1916 to 1970 in the U.S. Beautiful illustrations and a moving story told from Ruth Ellen’s perspective make this title a winner. If you like this book, you may also want to check out some of Cline-Ransom’s other work like Before She Was Harriet.

Train Books for Kids Who Are Middle Grade Readers 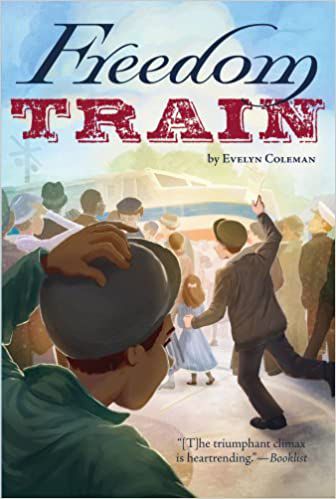 This is a middle grade read, the title of which comes from a train that traveled the U.S. between 1947 and 1949, making key documents on democracy and U.S. history available to the average citizen. The story revolves around 12-year-old Clyde Thomason and his family and friends, particularly his new friendship with another boy, William Dobbs, who is Black. 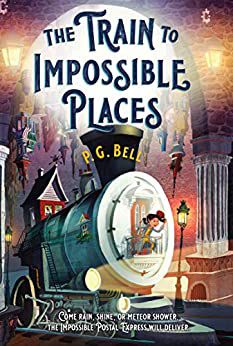 The Train to Impossible Places by P.G. Bell

This is the first train book in a series about Suzy Smith, a sharp 11-year-old who loves science and mysteries, and who suddenly discovers a train running through her downstairs hallway. For a quick introduction to the characters, check out the author’s video about them here. With lots of magic and trolls, this could appeal to quite a few readers. So far, there are two other books in the series, so if you find that you like this one, there are more to dive into! 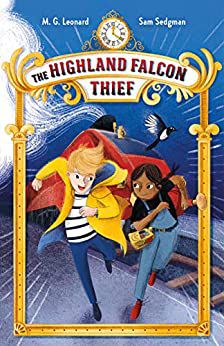 This is another middle grade read set on a train. The main character, Harrison Beck, is an 11-year-old reluctantly joining his Uncle Nat for a train trip from London to Scotland. Along the way, a priceless brooch is stolen and Harrison finds he has a mystery to solve with the help of some new friends he makes on his trip. This book is also part of a series. With four books out so far, this may be a good place to start for younger readers who enjoy an old-fashioned mystery to solve.

And that’s it for my train books for kids list! My personal favorites are Kim Hyo-eun’s I am the Subway and Jodie Callaghan’s The Train. I hope you also find some titles that appeal in there. If you’re still looking for more, you might want to check out this list about six picture books with vehicles.