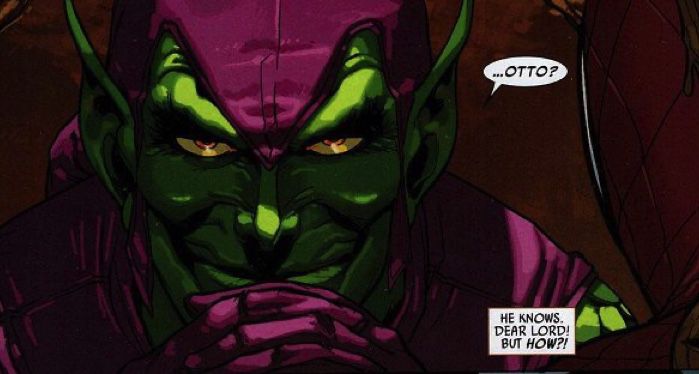 Spider-Man has the best rogues list of any comic book superhero. It is a long list. It is a varied list. It is a list regularly stolen from by other superheroes. This is the New York skyscraper I am willing to die on, fighting to the very end with every web shooter available. Of course, with such an extensive list to choose from, it would be difficult to determine a list of the best Spider-Man villains. One would even suggest such a list would only be for the purpose of chaos.

But isn’t that what villains do best?

Chameleon was the first villain ever to grace a Spider-Man comic, making his appearance in The Amazing Spider-Man #1 (March 1963). Originally, it was all about the disguise: Chameleon relied on his smarts and skills in deception while taking on the look and mannerism of anyone he desired. Over the years, this villain has evolved and grown to be a staple in Spidey’s rogues’ gallery across many issues and story arcs. Alternate versions have included mutant abilities and scientific experimentation but nothing compares to the mischief of TWIN Chameleons in Ultimate Comics: Spider-Man #11. They positively RUINED Peter Parker’s life and triggered the devastating consequences to come.

This guy is the epitome of brawn over brain. Rhino is pure muscle, with superhuman strength, speed, stamina, and durability. If you want absolute destruction, Rhino is your man. And once he is moving, he is nigh impossible to stop. Early issues with Rhino would always bring out the best fight scenes but it is the more recent storylines that allowed Rhino to show a bit of depth. Spider-Man: The Gauntlet, Vol.2: Rhino & Mysterio builds all of the emotion for Rhino’s redemption and then brings it smashing back to Earth. It seems everyone has a breaking point to turn them into a villain.

Speaking of breaking points, Lizard is on the villain list purely because of the dichotomy between villain and alter-ego, Dr Curt Connors. Talk about taking the “Lizard Brain Theory” to a whole new level. Dr Connors is Peter Parker’s mentor, an amazing scientist in his own right and totally obsessed with the regenerative abilities of lizards to restore amputated limbs. While in his human form, Dr Connors is constantly aware of the battle with his more animal-like instincts and maintaining enough humanity to remind Parker of all that can be lost with obsession. When he transforms into The Lizard, he is a deadly foe to Spider-Man and anyone who dares to defy him (including his own son). However, none of this is as powerful as The Lizard from Spider-Gwen’s Edge of Spider-Verse #2. Just go read it. I’ll wait.

The second of Spider-Man’s villains to be introduced and the first of the Animal-type, setting a theme for years to come. Vulture is one of those villains where you are really surprised to see how well it works. For one thing, Vulture has traditionally been characterised as much older than Spider-Man and other physically active villains. And yet there he is, holding his own against the nimble little whipper-snapper. And that flight harness! Bonus points here for the depiction by Michael Keaton in Spider-Man: Homecoming. To learn more about Vulture’s origins, start with The Amazing Spider-Man #2 (May 1963).

This guy gets my vote because he kicked off one of the weirdest and most frustrating story arcs of the entire Spider-Man series: The Clone Saga. Jackal’s alter-ego, Professor Miles Warren, was also in love with Gwen Stacy (Peter Parker’s girl). Unfortunately, her untimely death was enough to push him over the brink into desperation and madness. Jackal’s level of villainy is more than his own actions against Spidey; he is convincing enough to encourage others to fight for him in (including The Punisher). Every time you see a comment about clones or doubts about whether this is the real Spider-Man, you can blame it all on Jackal.

Flying Tiger first appeared in Spider-Woman #40 (October 1981), as an assassin hired to take-out Spider-Woman (Jessica Drew). With a fully armoured height of 6’4”, enhanced strength, and the ability to fly, it would have been fair to consider this a balanced fight. However, he defeated her and left her for dead in San Fran Bay. Fortunately for the Spider-verse, Jessica Drew survived and later returned to kick his stripey butt in what I consider one of the best come-back fights ever. Flying Tiger has continued to feature across other Marvel stories, including his battles with Iron Man and Spider-Man, and yet he is one of the few villains who has maintained his anonymity.

It’s all Jake Gyllenhall’s fault. Mysterio was never meant to be sexy and appealing. Yet here I am, voting for Mysterio to move up the Top 12 Best Spider-Man Villains. He is the master of disguise and illusion, stepping away from the physical brute force of other villains and aligning himself more with the likes of Chameleon (see above). Everything he brings to a fight is planned with precision and skill; from stuntman combat to complete set designs to fool Spidey into making a mistake. With Mysterio, you never know what is coming, going, or left behind. The complete unpredictability always brings out Spidey’s ingenuity, creating spectacular fight scenes and twisty dialogues. Start at the very beginning with The Amazing Spider-Man #13 (June 1964) and watch Mysterio evolve from there.

The first of the Symbiotes: Venom. What makes Venom such a great villain for Spider-Man is the absolute dark inversion of everything Spider-Man is. Venom is often referred to as ‘he’ but the truth is, Venom is an alien symbiote who takes on elements of whoever the host is. When Venom joined with Spider-Man, it had a taste of power that influenced every host-relationship from thereon. Eddie Brock is the best known of all the Spider-verse hosts, but Venom has also partnered with other Marvel characters, including Ms Marvel (Carol Danvers), Mysterio, and Groot (check out Guardians of the Galaxy (vol.3) #20-23). Over time, Venom has become more of the antihero than the villain. Partly because the obsession with Spider-Man has started to wane, partly because it was time we accepted we all have a little darkness inside us too. Doesn’t make us bad people, right?

For a long, long time, Spider-Man fans considered Green Goblin to be the ultimate nemesis. The Best of the Best Spider-Man Villains. Yes, Norman Osborn is possibly the most iconic of the rogues’ gallery but I don’t think he is the best. In true Spidey-style, he is definitely high on the dramatic points and a brilliant scientific genius. But if we are being truthful with ourselves, Green Goblin was the best Spider-Man villain right up until the death of Gwen Stacy. And then he sort of…wasn’t. The potential was always there, and the inclusion of Harry Osborn in the evolution of the character was choice indeed, but that green hoverboard never reached the same heights again. It is still totally worth seeing Green Goblin at his best in Amazing Spider-Man #121 and #122. So good it ended the Silver Age of Comics.

Okay, now we are getting into the top 3 of the best Spider-Man villains. Battle lines were drawn in our house and I don’t think we have yet recovered. King Pin made it into the top 3 because of his cold calculating manner, his power of manipulation, and his absolute physical presence as a mob boss. King Pin is usually associated with Daredevil, but he first appeared in The Amazing Spider-Man #50 (July 1967) and has made his presence known across New York ever since. Do not be fooled by his appearance; Wilson Fisk is a man of pure muscle. When I saw his portrayal in Netflix’s Daredevil, I was curious to see how they would display his body mass. There is one scene when he squashes someone in a car and even then I don’t feel they really captured it. Into the Spider-verse was probably closer as is the picture above. This is not a guy to mess with.

You thought Venom was bad? Try mixing that with a psychotic serial killer. What Carnage lacks in originality it makes up with in pure horror. Carnage originated from Venom and mixed with Cletus Kasady, creating the ultimate villain with zero interest in anything but pure carnage. There is nothing beautiful or clever or inspiring from this villainy; it is a pure nightmare that simply needs to be stopped. Carnage is so bad, it requires Spider-Man AND Venom to work together. Go back to the beginning with this one because the horror simply continues to build from there: The Amazing Spider-Man #361 (April 1992).

And the number one best Spider-Man villain across the Multiverse goes to Doc Ock. Now, before you crack open the bottles of champagne, this award goes to Doc Ock across all of the Spider-verse. There are multiple versions of Doc Ock and each of them have provided more than enough challenge to our web-swinging hero.

Dr Octavius was originally a brilliant scientist, a common theme in Spider-Man comics and a great way to elicit some empathetic response from Spidey. We’re talking absolutely brilliant mind. One of my favourite arcs for Doc Ock was The Amazing Spider-Man: Ends of the Earth, where this top villain threatens the world with climate destruction if they do not pay into his amazing scheme to SAVE the world from climate change. Sure, the delivery isn’t great but you have to admire a villain who wants his surviving legacy to be saving the world, right?

Special mention needs to be given to Doc Ock from Into the Spider-verse, AKA Dr Olivia Octavius. Like other versions of Doc Ock, Olivia also has four mechanical arms fused to her body. Using these arms gives added strength and dexterity to her scientific research AND her desire to defeat any spidey-foe that stands in her way.

To read more about Spider-Man, check out Rebecca’s Introduction to Spider-Man here.

Spider-Man’s rogues’ gallery contains over a 100 villains, dangerous enough to be stolen regularly by other comic book series and popular enough to be retconned ad nauseum. That’s not even counting the extended Spider-verse. There will always be debate over who are the best villains but I’m throwing down the gauntlet. Bring your alternatives to our social media discussions.

Who do you think are the Best Spider-Man Villains?