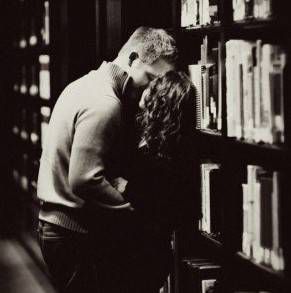 A personal romantic history through the lens of (what else?) bookish moments.

I am fourteen. My first boyfriend and I have been “going out” long enough for our parents to have gotten sick of driving us to and from the movie theater–I can still hear my mom declaring, “By the time I get home from dropping you off, I have to turn around and go pick you up.”–so we’ve taken to hanging out at the mall (original, I know). We wander for hours, goofing in a photo booth (remember when malls still had photo-development shops?), bumping into friends, doing whatever it is that fourteen-year-olds do left to their own devices in a mall. We probably find somewhere to make out. Eventually, we find our way into Waldenbooks. Remember when every mall had one of those?

YA fiction hasn’t yet become a Big Thing, so I’m in a weird reading place, stuck between Sweet Valley High and actual books for sort-of-grown-up people. First Boyfriend says his favorite book is Slaughterhouse-Five. I buy it, and I don’t get it at all, and because I’m fourteen, I assume it’s because First Boyfriend is so much smarter and cooler than I could ever hope to be. Several years later, I’ll pick it up again and realize that Vonnegut is tough and First Boyfriend was probably lying about loving it anyway. Still, it puts me off trying Vonnegut again for more than fifteen years. When I finally get around to reading Slaughterhouse-Five, I will do it primarily to reinforce my confidence in myself as a reader.

I am sixteen. I have a boyfriend who has his own car. He is smart, and he sings and plays the guitar (at sixteen, I find this a very swoon-worthy feature, even if his endless renditions of Green Day’s “Time of Your Life” are what Randy Jackson would call “pitchy, dawg”), and he doesn’t read. At least, he doesn’t read for fun. He’s killing it in AP European History, though! This boyfriend, let’s call him Preacher Man, is a Very Earnest Midwestern Christian, and he’s almost Puritanical in his desire to be industrious. He says things like, “Why would I sit around reading when I could be doing something productive?”

I see red flags, and I ignore them (because singing and guitar playing!). When we do go into bookstores together, Preacher Man occupies himself on the Bible aisle (not even Christian Fiction because fiction is unproductive, and besides, the Left Behind series won’t come out for a few years) and shoots impatient glances my way. There’s no whispered show-and-tell of our finds, no rushing home to settle into companionable side-by-side reading silence. There’s just him feeling bored (I assume) and me feeling judged. It’s an ugly break-up when it happens, and I, having concluded that Preacher Man’s problem wasn’t so much with my books as with what they represented, resolve that the next guy I date will be one who likes his ladies brainy and bold.

I am seventeen. It’s Christmas Eve in Kansas City, and I’m driving home from The Plaza (a gorgeous old outdoor shopping center) after a visit to my favorite Barnes & Noble with a close guy friend. It’s snowing, and we’ve just spent hours looking at books and testing out CDs (remember when B & N stores had huge music departments with listening stations?). We’ve brought our hot cocoa in to-go cups, and we’re doing that thing you do with people you’re really comfortable with where you’re silent for a while, then one of you murmurs something in your friend-code that no one else would understand, and then you’re silent a little while longer. We stop at a red light, and he says something that changes everything, and then we are dating.

Soon he gives me an inscribed copy of The Scarlet Letter (my favorite), and we have long, rambling discussions of the books we’re reading for school. We edit each other’s papers, and often speak in literary references, and we give each other books as gifts. I write some now cringe-worthy poetry, and he is the first boy I let read my writing. Words are significant to us. Words matter. A year and a half later, because words aren’t as all-powerful as we wish they could be, I utter the ones he doesn’t want to hear, and it ends. I tear the inscription page out of that copy of The Scarlet Letter, wanting to keep the book but banish the memory. Eleven years later, I still regret that.

I am eighteen. In college, where, as I’ve been promised, being smart is just (or at least almost) as valuable as being pretty. The guy I’m dating–I’m too old to call him a boy but not yet old enough to think of myself as dating a man–is into books too. He counts Vonnegut among his favorites but doesn’t seem to care that I’m still not up for Slaughterhouse-Five. We go on hours-long bookstore dates–to the now-closed Borders on Michigan Avenue, to the quirky-weird shop up the street from campus, to the platonic ideal of a used bookstore in Evanston–and occasionally, even after we’ve been dating for years, he calls me on the phone to ask me out on one.

We share a love of books, but we don’t share the books we love. I mark in mine, and he likes his pristine. The not-sharing doesn’t feel stingy or un-intimate, though. We are a study in opposites. We get married in a library, in the presence of the scholars, the lovers, the poets, and the artists. It takes us two more years to combine our bookshelves. We share a home, a bank account, a dog, some friends, our lives.

More than a decade together, and we still don’t share books. We probably never will. And that’s okay. You don’t have to share everything for it to be love.