Reading Pathways is a regular Book Riot feature in which we suggest a three-book reading sequence for becoming acquainted with certain authors. Check out previous entries on Toni Morrison, Charles Dickens, and John Steinbeck.

To the casual reader, David Foster Wallace may seem intimidating. The words “postmodern” or “experimental” or “preposterously intelligent” are never too far from descriptions of his work. Those are all true. But I’m here to tell you DFW is actually the most accessible “difficult” writer you’ll ever read. And easily the most insightful. And probably one of the funniest, too. He’s my favorite writer of all time, and I think you’ll love him. And so here’s a suggested DFW reading pathway:

Start With The Essay Collections


Consider The Lobster — One of DFW’s greatest gifts was to seamlessly mix low-brow humor with high-brow articulateness, often within the same piece of writing. Nowhere in DFW’s oeuvre is that more evident than in this collection. Example: In an academic (but very readable) essay titled “Authority and American Usage” on descriptive vs. prescriptive grammar, DFW dismisses a particularly poor argument as “…so stupid it practically drools.” These essays best showcase DFW’s range of styles, from academic to acerbic to ass-bustingly hilarious, and so it’s a great place to start to introduce yourself to his style.

A Supposedly Fun Thing I’ll Never Do Again — The title essay for this collection, about the preternaturally shy, somewhat socially awkward DFW’s experiences on a cruise by himself, best illustrates another of DFW’s greatest gifts: sharp observation. Also, the essay is piss-your-pants funny. Example: The only highlight of each day for him (a grown man) is beating the crap out of some bratty teenager in ping-pong.

This Is Water — DFW’s commencement address to Kenyon College in 2005 is about the importance of empathy. It’s basically a call for each of us to adhere to the one, immutable rule of life: “When in doubt, don’t be a douche.” I re-read this several times per year. Gives me chills each time.

Move On To Short Stories
Girl With Curious Hair — Though this is probably my least favorite DFW volume, there is still much fun to be had here. The title story is my favorite and “Little Expressionless Animals,” about a lesbian with a Jeopardy winning streak, is very good as well. If you’re up for a bit of reading masochism, go ahead and try the last story, a novella titled “Westward the Course of Empire Takes Its Way.” It’s one of the more difficult-to-get things I’ve ever read.

Brief Interviews With Hideous Men — This is less a short story collection and more a playful experiment with form and style. There are a few actual stories, but much of the book is interviews in which you read the answer but not the questions. You’ll have to trust me that that is a lot less annoying than it sounds. Believe it or not, John Krasinski (yes, of The Office) actually undertook adapting and filming this thing. It was only okay, but definitely A for effort!

Oblivion — DFW’s last collection of short stories, published in 2004, is his most “normal” (i.e., straightforward) collection, but also his most cerebral and darkest. Reading these stories makes what happened on Sept. 12, 2008 less surprising, but even sadder.  (If you’re not familiar, David Foster Wallace hung himself at his home in California, after a life-long battle with depression. He was just 46.) 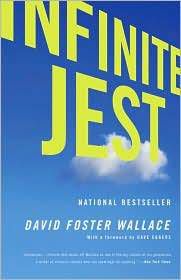 Infinite Jest — The magnum opus. This novel IS David Foster Wallace. Yes, it’s 1,079 pages long. Yes, it includes more than 300 endnotes. And yes, for much of the first 200 pages, you’ll have almost no idea how the various vignettes are related. But once you hit your reading stride, once you settle in and get comfortable, and once you relax and realize you won’t get everything right away, you’re in for possibly the best reading experience of your life.

The Pale King — While Infinite Jest deals with addiction to entertainment, this unfinished novel published earlier this year examines boredom. At the end of the novel, DFW’s long-time editor Michael Pietsch provides several pages of notes he drew from some of DFW’s collected papers. The notes give insight into how DFW would’ve connected characters and themes and brought the novel to fruition. It’s infinitely sad, reading those because you soon realize The Pale King might’ve been DFW’s best book.

The Broom of the System — DFW’s first novel (it’s actually his undergraduate thesis) is the only published work of his I haven’t read. I’m saving it. For what, I don’t know. It’s just nice knowing there is something out there of his I haven’t read, since there will never again be anything new. RIP, DFW.

To conclude, here are some quotes:

“Fiction’s about what it is to be a f$#%ing human being.”
— David Foster Wallace, interview

“It’s weird to feel like you miss someone you’re not even sure you know.”
—  Infinite Jest