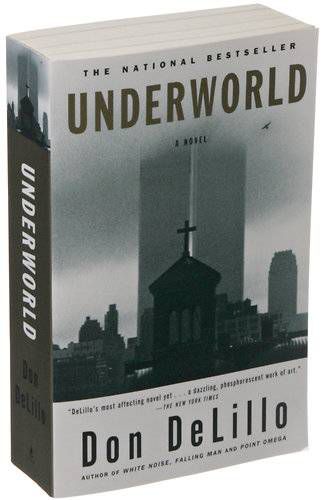 There’s a passage about halfway through Don DeLillo’s novel Underworld that is so profound, so unerringly elegant, that I very nearly put down the book and stopped reading right there. DeLillo is talking about mushrooms. A character, a scientist who works on nuclear weapons, compares hallucinogenic ‘shrooms to the mushroom cloud of a nuclear explosion.

“When you hallucinate, the point of any hallucination is that you have a false perception that you think is real. This is just the opposite. This is real. The work, the weapons, the missiles rising out of alfalfa fields. All of it. But it strikes me, more and more, as sheer distortion. It’s a dream someone’s dreaming that has me in it.”

I can’t even explain precisely why that passage affected me or struck me with its profundity. The way DeLillo makes us see the familiar in a new way? How the real seems absurd and the absurd seems real? Because mushrooms are funny? I just know that after I read it, I stared off into space, thinking about it for a solid 20 minutes. And it hasn’t left me since.

Isn’t this often the case when you read fiction? You come across passages like this all time, often out of the blue, and for reasons not altogether clear, they punch you in the brain, take up residence, and won’t leave you. They connect you to the real world in ways that are as real and concrete as your favorite memories. They make you immensely happy that you love reading.

Maybe it’s a Colum McCann description, from Let The Great World Spin: “She had the bluest eyes, they looked like small drops of September sky.” And that reminds you of someone you know.

Maybe it’s something that strikes you as way more funny that it probably should be, like Jess Walter’s passage from The Financial Lives of the Poets:

“He stops in the aisle of how-to books and clicks his tongue as he runs his hand across the spines of books that show how to do simple electrical work and how to repair and carburetor and how to fix a clogged sink and how to build a porch and how to stain your fence and, finally, how to build a tree fort. This long bookshelf seems taken directly from my insecurities — an entire library of things I cannot do. In the next aisle of this hell-library would be books about how to manage your billions and what to do with your foot-long penis.”

Or maybe it’s an author giving voice to an idea that had banged around in your own skull, but never quite congealed, like Gillian Flynn’s notion of the “dancing monkey” in Gone Girl. (That one you just have to read yourself. And you should.)

Like you, I get really angry when someone says they don’t read fiction because it’s all made up and “not real.” Bullshit! Nothing is more real than fiction. Nothing helps us make sense of the real world more than fiction. Nothing instills in us empathy for others like fiction. As David Foster Wallace said, “Fiction’s about what it is to be a fucking human being.” That’s my favorite quote of all time, because nothing more true has ever been said.