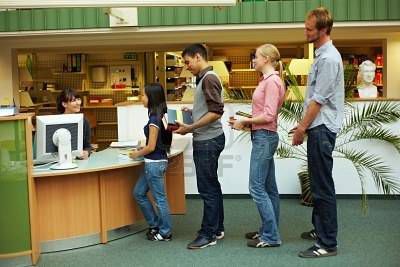 Earlier this week I had what is, I think, one of the best experiences for a book nerd: picking up a long-anticipated hold at my local library.

The book in question was Gillian Flynn’s Gone Girl, arguably the buzziest book of the summer. When I got the email notification that the book had finally arrived, I squeed to a friend online and told her that I had been waiting FOREVER to get the book. Then I went to check my library website and discovered I’d actually had a request in for the book since June 17, only about 50 days.

I live in rural Minnesota and am part of a small library system where holds that long are rare, so I suppose I can be forgiven for thinking it was an eternity. When I lived in a bigger city, Madison, Wisconsin, it wasn’t uncommon to wait on a hold list for several months for a popular book.

Because I’m a book nerd who also loves playing with numbers (even if I’m terrible at it), I decided to compare my small, local library system to some other cities to see how much longer I might be waiting for Gone Girl if I lived somewhere else.

My Library: The Viking Library System

Unfortunately, the more I collected and made calculations, the less sure I became about whether these numbers could tell me anything. Most significantly, the number of holds per book in my current library system (4.2) is much lower than the systems I compared it too, at least one indication of why I moved up the hold list so quickly.

My library also has a comparable number of books per population as two of the other libraries, which could indicate these libraries had a pretty similar idea of how popular Gone Girl might be. However, that’s also a difficult metric, since it not all libraries can afford to buy so many copies of a single book. It also doesn’t include available ebooks or audiobooks, which other libraries may have more of than my library system

But as a couple of friends pointed out, every library system is a little different, and those differences matter. Shorter or longer loan periods, differences in how books are transferred between libraries, and the number of people in the population who have a library card would all make a difference. And a different book would almost certainly show different numbers. So I guess this little exercise wasn’t especially conclusive, but I thought it was fun.

How does your library hold system work? How long do you have to wait for popular books? What’s the longest hold list you’ve ever seen? At what point do you give up on the library and just buy a copy of the book yourself?