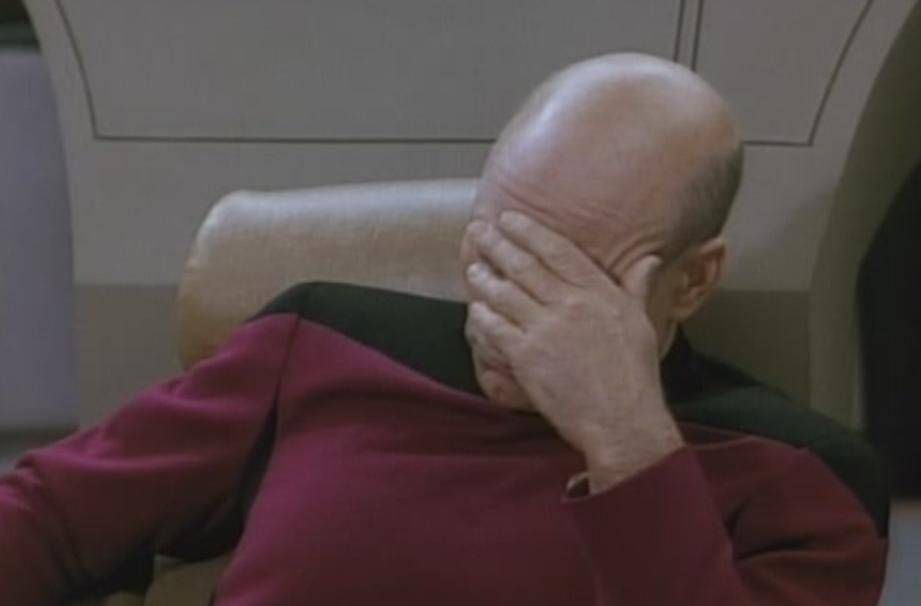 We usually keep things pretty positive here at the Riot, but after many years of life in the bookish interweb, we’ve identified some conversations that just keep coming back up. And we’re ready to put an end to them. So pull on your crankypants, kids, and join editors Rebecca and Jeff for a good old-fashioned Airing of Grievances.

Rebecca Joines Schinsky: I’m just gonna come out with guns blazin’. I never want to hear another variation on, “Save this bookstore! Give them your dollars!” ever again. I love indie bookstores as much as the next girl, and I’m doing my part to keep my local’s doors open. I believe in voting with your wallet to support businesses you want to see stick around. But bookstore owners need to innovate and find new business models and ways to compete, and if they can’t, it shouldn’t fall to their customers to save them.

Jeff O’Neal: I agree—with a small qualifier. If a bookstore is looking for funds that will add or alter how they make money or that will reduce costs, I am more sympathetic. It’s the “give us money so we can keep doing things the same way,” I have a tough time being interested in. This also relates to the zero-sum game of giving: wouldn’t giving that money to beleaguered public libraries be money better spent? In the grand view of keeping books and reading supported? I need the Planet Money guys to do a podcast about this.

RJS: With you on that qualifier. Good point.

#9 CELEBRITY X GOT A BOOK DEAL, PUBLISHING IS DOOOOOOOMED

JSO: I am so tired of this one I can’t even trot out a not-funny joke. For some reason, if a publisher makes a money-grab acquisition, then literature itself is threatened. It may or may not be threatened, but the final hammer-strike will not be Snooki’s book or Meghan Fox’s confessional poetry (which I would read with extreme prejudice by the way).

RJS: Or Kate Upton’s Guide to Doing the Dougie (And Looking Fly)? I’m not even a little bit ashamed to admit I’d read that.

I think this dead horse gets reanimated and beaten up for a couple reasons. It gives writers who have been rejected by publishers a convenient way to explain their failure (and, you know, rejected writers owe their adoring publics an explanation about why they’re not published yet), and it’s an easy repository for all the free-floating anxiety in the publishing industry. Scared about the future of books? Blame a Kardashian!

RJS: I sorta like the diversion of stuff like #fridayweeds and #badwritingtips, so I don’t know how much grumbling I can muster for this one. It was your pick, Jeff, and I like you, so I’mma let you finish.

JSO: You can only find puns based on Steinbeck titles funny for so long. I liked about the first 987023452 hashtag games, but I think the genre is pretty well strip-mined at this point. If I have to see someone make the “Tequila Mockingbird” joke one more time, I’m going to have to revoke someone’s cool card.

JSO: This one’s tough because it is a real problem. Women should have a fair piece of the reviewing/being reviewed pie. Duh. But there’s also this way where counting the gender-beans of a publication or an award or a list dominates other kinds of imbalances (like the racial one in the Book Riot Top 50 list we did last week). It’s relatively easy to look at the author names on a list of books and see gender, but it’s considerably more difficult to see class or education or any number of things we all would like to see represented.

The other problem is that the responses of publications that get called out are always so lame. No one is ever like “Oh my god. 92% of the books we reviewed last year were by dudes. We need to fix that like yesterday.”

Does any of that make sense?

RJS: Absolutely. The gender imbalance is a problem, and it’s one we should talk about and respond to, but it’s not the only imbalance, or any more important than the other types of inequity you mention. And really, we shouldn’t want to see lists constructed solely with the goal of achieving gender equality all the time. There are situations in which more books by men will fit, and there are situations in which more books by women will fit, and I’d love to see a list that was so truly and obviously merit-based that no one would want to reach for the gender-beans. Is that so much to ask?

RJS: This argument might have been interesting a decade ago, but I sincerely doubt it. The tension between the old-guard lit critics who are–let’s be honest–afraid of being made irrelevant, and bloggers who have changed the public conversation about literature (and, I would argue, breathed new life into it) is real, sure. But it’s a total snoozefest, and new posts about it are rarely more than pageview whoring. Having a slow week at the Official Website for Dying Print Publication? Make some bloggers mad!

And bloggers’ responses are almost as bad. Nothing smacks of pandering quite like a blogger writing a post about how bloggers will save us all. A little (or a whole hell of a lot) less conversation, and a little more action, please.

JSO: Totally agree. We’re probably a little biased here, but this also feels like a settled question. I think a more interesting question would be something like: has blogging increased the total attention paid to books? It feels true, but again, this is the business I’ve chosen. There’s probably no way to measure this, but I don’t think that discussing books is a zero-sum game, with X number of minutes people will spend reading, and reading about books.

#5: BOOKS EVERY PERSON OF A CERTAIN AGE/RACE/GENDER/NATIONALITY SHOULD READ

JSO: At least two things to hate here. First, the moral “should” that creeps into WAAAAAAY too much book discussion. There is no should, folks. Second, I thought the culture wars cured us of the desire to essentialize identities like this. These lists are more about constructing identities than representing some shared experience. And they are as bogus as a three-dollar bill.

RJS: It gets even worse when the list is books you should read about an identity or experience different from your own. Books Every Woman in Her 20s Should Read is bad enough, but Books Men Should Read To Understand Women in Their 20s is just, I can’t even.

Let’s take “there is no should, folks” and spread it across the bookish internet. Like a literary version of “keep your laws off my body.” I don’t want guilt or moral imperatives anywhere near my reading, thankyouverymuch.

#4 AUTHORS RESPONDING TO BOOK REVIEWS IS A VERY BAD IDEA

RJS: This one comes straight from the Department of Conversations That Need More Nuance But Will Never Get It. I don’t think it’s always bad for authors to address reviews–I like to think it could be done constructively–but we’ve seen enough social media shitstorms to know that it’s rarely a good idea (and to convince me that I never want to be a publicist).

We get it. Some authors can’t handle criticism, and some feel entitled to a positive review just because they sent a reviewer a “free” book, and some are just assholes. Can we stop talking about this already?

JSO: Is there a nastier, meaner corner of the literary internet than this stuff? There are some really unbelievable reviews and some even more unbelievable responses from authors (and/or their entourages). There is definitely a more interesting discussion about the relationship of the author and reader and what we think is fair game for reviews. I guess the thing that seems strange to some people, authors included, is that once a book is out in the world, readers have more control of it than the writers do. The book is what it is at that point, but what is said and thought about it is very much up for grabs, so the stakes feel high (though I don’t think they are in most cases). The risk/reward for responding to a negative/unfair review is usually…..unfavorable.

#3 WHO IS QUALIFIED TO REVIEW BOOKS?

JSO: This leads nicely into a larger, equally tiresome “debate.” Who should be reviewing? Which is really sneaky way of asking “who shouldn’t be reviewing?” Our, now vestigial I think, idea of a review implied authority. “X got a great review in The NY Times” conferred the authority of the publication onto a book, when really it was an individual doing the reviewing. My point is that the whole “credibility” equation was distorted already. Throw in “amateur,” “reader,” “blogger,” and other kinds of reviewing, and you have a confusing morass of cross-purposes. I think authors want an authoritative seal of approval that confers value, where more democratic reviews aren’t in the business of authoritative judgment. They are in the business of giving personal opinion. That we use the same word, “review,” for different ends is frustrating. I bet the Germans have this figured out.

RJS: That conflation of reviewer with reviewer’s publication is a hairy beast. You’re right that the credibility thing has been distorted from the get-go. That anyone can create and build a platform, and have authority conferred on them by readers in the popular vote of pageviews, just makes it far more apparent. The folks who want things done the way they’ve always been done just because that’s the way they’ve always been done don’t appreciate having this pointed out. It’s like revealing that The Great and Powerful Oz is just a dude pulling levers behind a curtain.

And it makes me wonder: if no one had ever heard of, say, Michiko Kakutani, and she started a blog running the exact same reviews that are now printed in the New York Times, would anyone care? Would she become A Really Big Deal? I have my doubts.

#2 SELF-PUBLISHING IS THE END OF EVERYTHING

RJS: Since we’re on the subject of authority and gatekeepers…God, I don’t know if I even have anything interesting to say about this. I’m so over it. People can publish their own books. Some of them will be successful. Many of them will not. Traditional publishers will continue to offer services and tools (and, ahem, authority) individuals cannot afford on their own, and for that, many writers will resist self-publishing. The end.

JSO: Here it is, the most unkillable talking point in today’s book world. As a recent all-digital convert, it is clear to me that the difference between a print book and an ebook is both miniscule and immaterial. As romantic as print is, digital has so many advantages that I have a hard time seeing how it won’t be the dominant form, and soon at that. But print may well remain important. I don’t know, and neither does anyone else. And more importantly, it doesn’t matter.

RJS: With you there. I haven’t made the full conversion to digital reading that you have–I’m at about 50% paper still, mostly because that’s the how galleys show up at my house–but I can see it coming, and I’m fine with it. We’ve talked a lot about the notion of books as containers, and I think that’s right. As I wrote here recently, books are not sacred objects. It’s the stories that we’re really connected to, and as long as we continue to have stories–which we’ve had for a hell of a lot longer than we’ve had printed books–we’re all going to be okay.

Now that we’ve aired our grievances, let’s ask the readers. What bookish conversations and complaints will you be running up the Festivus Pole this year?