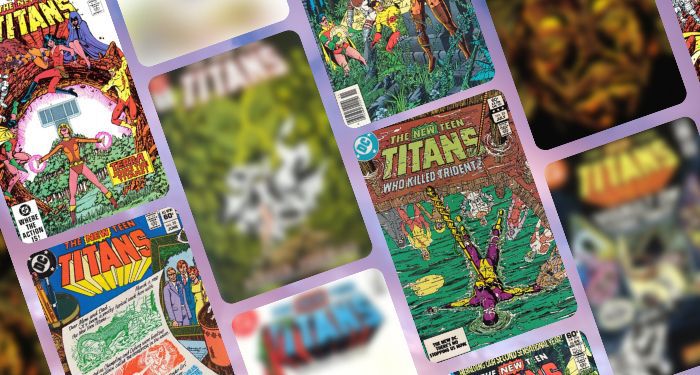 Earlier this year, the comic book world lost one of its brightest lights: George Pérez, an artist and writer who worked on some of the biggest titles at DC and Marvel throughout the ’80s and ’90s. He passed away in May 2022, so now that we’ve had a few months to process his death (and now that Hispanic Heritage Month is on our doorstep), I think it’s a good time to look back on some of the work that made him so beloved.

New Teen Titans was published from 1980 to 1984, at which point it was renamed Tales of the Teen Titans and continued under that title. Meanwhile, the title New Teen Titans was given to a new series and started numbering over again from Issue One. A little confusing, maybe, but a milestone nonetheless: the series is still regarded as one of Pérez’s greatest accomplishments. In partnership with writer Marv Wolfman, he took a group of young crime-fighters called the Teen Titans — whose previous series, Teen Titans, had been axed two years earlier after some extremely weird storylines — and rebooted them into the powerhouse they are today. Aside from adding blockbuster new characters — including heroes like Raven, Beast Boy, Cyborg, and Starfire, and villains like H.I.V.E., Terra, and Deathstroke the Terminator — Pérez contributed stunning covers.

Picking favorite Pérez covers is like picking a favorite ice cream flavor: they’re all so good that it’s hard to pick! After much agonizing, I managed to narrow this list down to just eight. I also stuck only with New Teen Titans covers, and I excluded Tales of the Teen Titans. (Pérez didn’t do much cover work on those ones anyway…and it shows.) That means I looked through the 40 original issues of New Teen Titans, plus a handful of covers from the rebooted version, plus qualifying annuals to bring you this list. 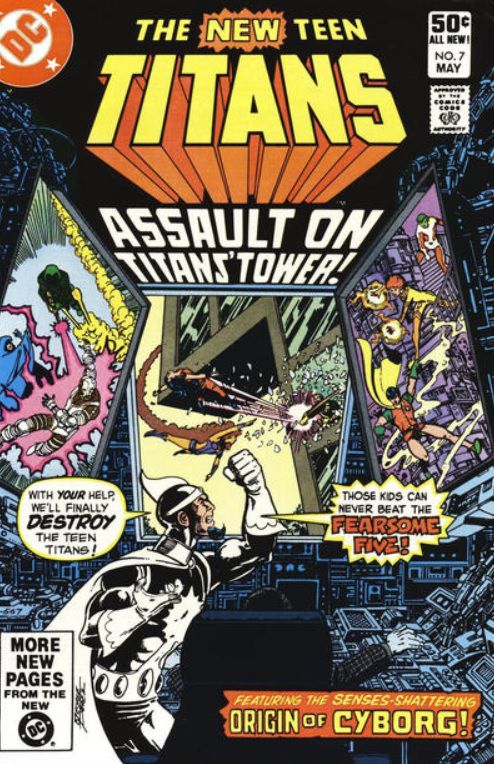 Just look at the detail on this one! Not only is Doctor Light’s fancy computer full of intricate linework, there’s three different screens to display what the individual Titans are doing. There’s so much to look at that I almost didn’t notice the mysterious shadowy figure with his back to the readers down in the foreground. Clearly, a lot of effort went into this cover. 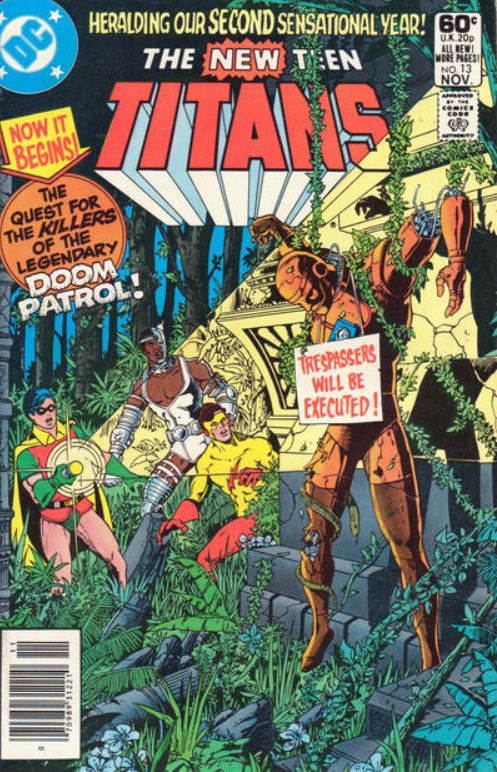 I just love the atmosphere of this one. You’ve got the Titans wandering through an overgrown jungle, only to stumble upon the brutalized metal body of Robotman from the Doom Patrol. The lighting and shadows go a long way here. 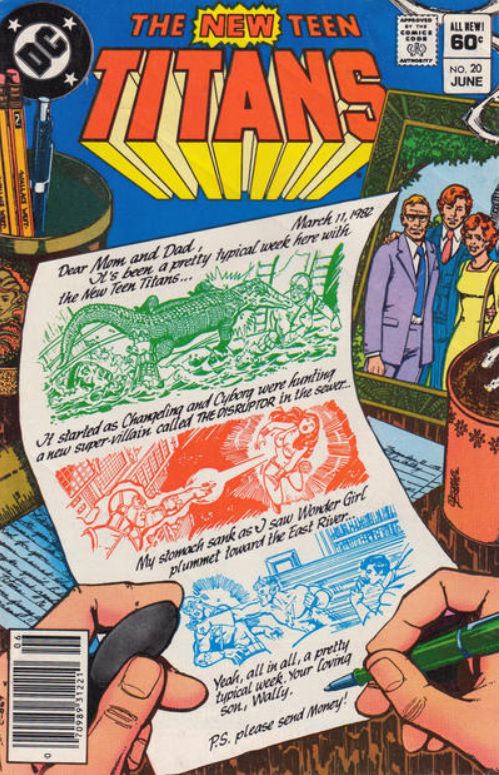 This is such a fun idea for a cover! It’s a little wordy, admittedly, but I love how it allows one of the book’s own characters (in this case, Kid Flash) to offer a little recap through a letter to his parents. And he also begs for money at the end, which is vintage Wally West (at least until he wins the lottery in a few years). 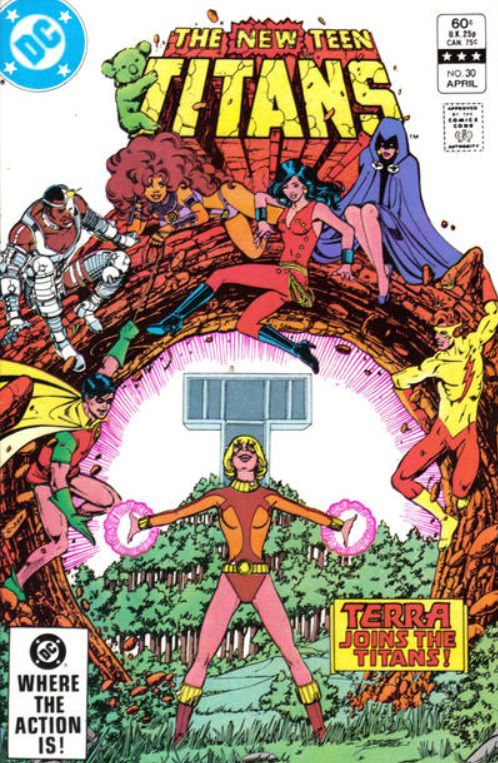 How could I not include this classic? This is the issue when, after waffling a bit, the New Teen Titans admitted their first full-time new member: Terra, a teenager with dark secrets and a fiery temper. It looks like a cheery, happy cover as the Titans celebrate this auspicious event. And yet, you can see the team’s name cracking under the strain of Terra’s actions. Right from the start, Wolfman and Pérez made it clear that Terra was a villain — but no one in the comic or in the real world could believe it. 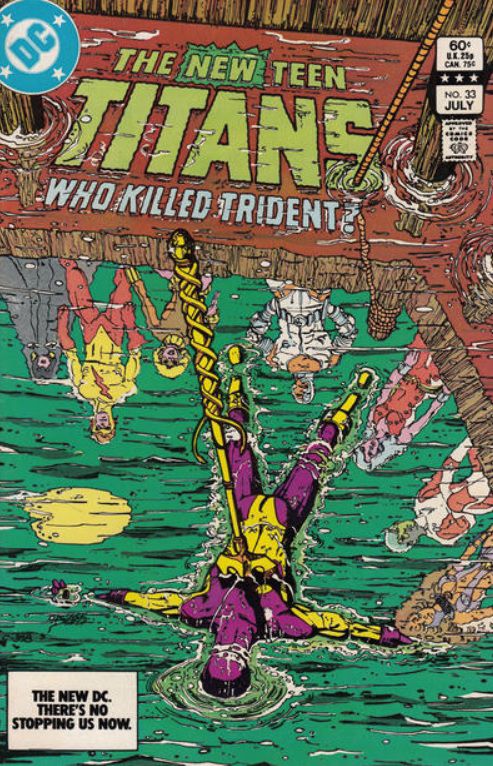 This one caught my attention because of the perspective: you’ve got a dead supervillain lying face-down in the water, and then the reflections of the Titans as they look down on the scene. There’s something very dramatic — even cinematic — about this shot that makes me want to reread it immediately. 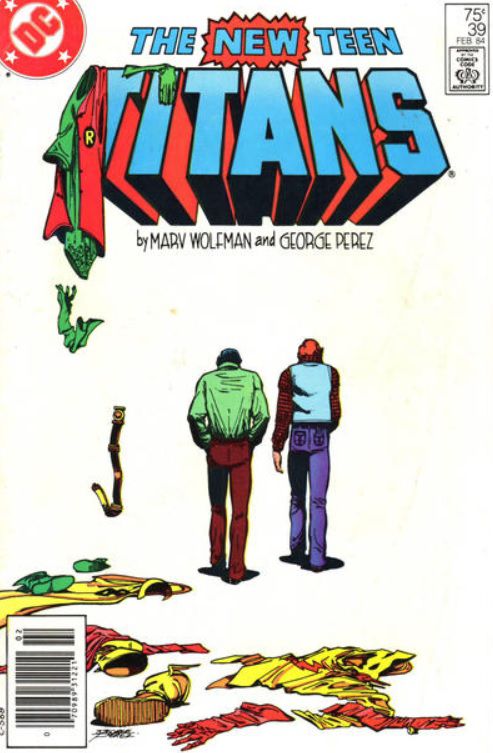 In contrast with some of the other covers that made the list, this one is striking in its simplicity. It marks a big change in the Titans’ line-up: Robin and Kid Flash, two of their founding members, have torn off their costumes and are now sadly leaving the team. It’s reminiscent of an image from Amazing Spider-Man #50, when Spidey throws his costume in the trash and walks away. But this one, without a background or even a teary word balloon, is even starker. (No hate for the original — they’re by different creators working in totally different time periods!) 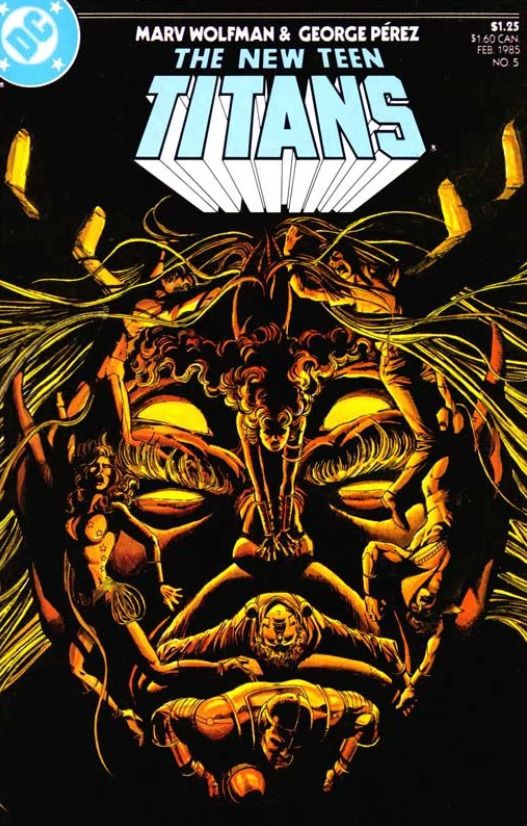 The Titans forced to contort themselves into a death mask resembling Raven’s demonic father, Trigon? That is both clever and incredibly creepy. The lighting adds to the eeriness: it feels like when you hold a flashlight up to your face in a dark forest to scare your friends. 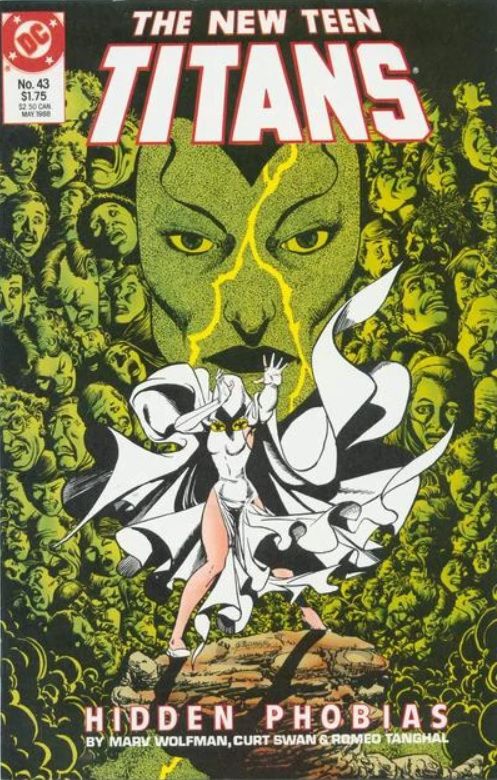 One of the things Pérez is most known for is his ability to draw faces so distinctly that you can easily tell everyone apart, even when they’re in a big crowd (which he also excelled at drawing). That’s really on display here as Raven, clad all in white, is the only bright spot in a sea of anguished faces.