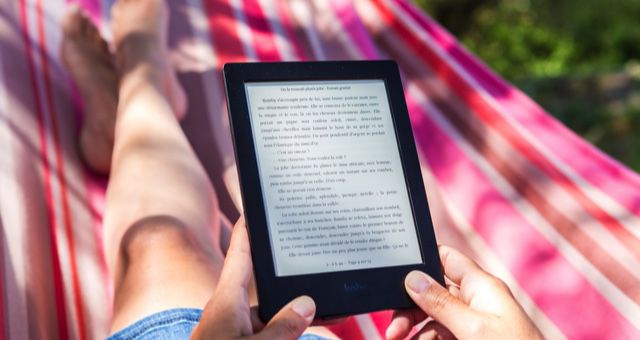 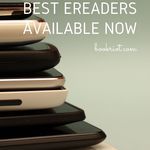 This list of the best ereaders is sponsored by The Hive by Barry Lyga and Morgan Baden from KCP Loft.

It’s true that when people think of the best ereaders, they tend to think of Kindles. Amazon swept in early (I was 10 when I received my first ereader, the now discontinued Kindle Keyboard, in 2010) and seems to have cornered the market. But even within one brand, there’s a lot of variety. There are also a number of other devices which you may find more suited to your habits.

To that end, here’s your breakdown guide! I’ve chosen to discuss the two best ereaders from Amazon and Kobo, as these are consistently ranked first. NOOKs are no longer available in the UK so won’t be included.

Kindle Oasis: For the Dedicated Bookworm 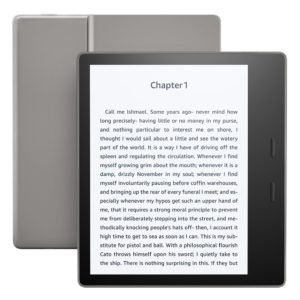 At £200/$216, the Kindle Oasis is the most expensive Kindle Amazon has produced (particularly for us disadvantaged British readers). But you also get premium features. It’s waterproof to a depth of 6.5 feet, made of brushed aluminium, has a 7-inch touchscreen with 300 pixel density, and a distinctive ergonomic design. The bump on the side makes it very easy to use with one hand and the backlight is exceptional. Plus, there’s even an accelerometer inside so you can turn it around and the screen will turn with you. With Wi-Fi on, the battery life isn’t great, but it lasts for about a week in aeroplane mode.

It’s true that you’re locked into the AZW3/MOBI file format, and the Amazon ecosystem, but via Calibre it’s easy enough to convert your EPUB books for Kindle reading. The biggest con of the Oasis is by far its price. This is an ereader for those who read a lot, and want the most high-end Kindle in existence to do it on. The 7-inch screen also means it won’t fit easily into your purse or pocket, though it’s still incredibly light and thin.

This is the one I have. My blogging/reviewing means I do read a ton, so it was a great 18th birthday present last year. The good news is also that unlike a phone, there isn’t a new iteration of Kindle Oasis every year. Once you buy one it’s good for the long term.

Kindle Paperwhite: The Best for the Rest 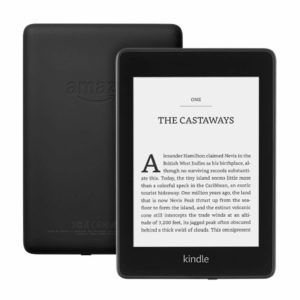 The Kindle Paperwhite is, essentially, all you really need in an ereader. For £120/$130, you get a flat, slender tablet that’s also waterproof and has an adjustable backlight. The 300-pixel screen density is equivalent to the Oasis (though the screen is smaller at 6 inches). As with the Oasis, the screen is flush with the bezels, so there’s no unsightly rim around the screen. It’s no surprise that this is Amazon’s bestselling Kindle. You get almost everything the Kindle Oasis has, but for almost half the price.

There are no page turn buttons though. Pages are moved by tapping either side of the touchscreen.

Kindle: Best Ereaders on a Budget

For $40/£50 less than the Kindle Paperwhite, you can go for the simply named Kindle. It now even features a backlight. It didn’t do that when I bought it in 2013, which made reading at night impossible.

However, the backlight isn’t adaptive to your surroundings and the screen resolution is only 167 pixels. The plastic case means there’s a raised area around the screen, making it less physically appealing than its younger siblings. Also, be warned that they’re not lying when they say it’s not waterproof. I dropped it into the bath (hence the replacement with the waterproof Oasis) and the dunk absolutely killed it.

The Edgy Ones: Kobo 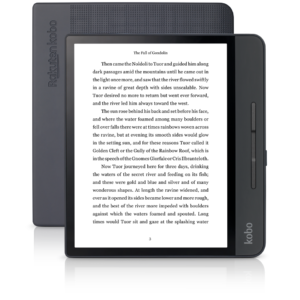 You thought the Kindle Oasis was the most expensive ereader in existence? Think again. The Kobo Forma is $280 for Americans and £240 from where I’m sitting, for the base 8 GB model. (That’s also the base storage for the Kindles).

The design is somewhat similar to the Oasis, with two buttons on the right side. That’s where the similarities end. The screen is a whopping 8 inches, with 300 pixels per inch (ppi); you can read a huge range of ebook formats instantly without converting them; and there’s even a built-in blue light filter and Overdrive support. You get the choice of 50 font options compared to Amazon’s measly handful.

On the flip side, the plastic-and-rubber casing means it doesn’t feel as much of a premium device as it should (considering how much you’ll have paid for it). There’s also no Bluetooth connectivity so you can’t listen to audiobooks. Nor can Kobo boast access to the largest ebook store on earth – content is still Amazon’s domain. Notwithstanding that, it’s one of the best ereaders that isn’t a Kindle. 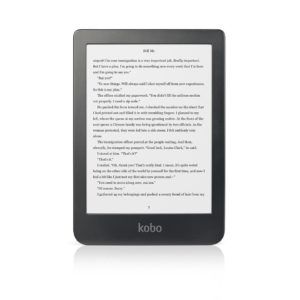 It’s cheap: £110 in the UK, $130 in the U.S. (I’ve also found a $70 version on Walmart). But it packs in almost all the same features as the twice-as-expensive Kobo Forma, with a blue light filter and 300-ppi resolution. It’s also the same weight as an iPhone 8 Plus and supports more than a dozen ebook formats.

Unfortunately, this one lacks water resistance and Overdrive integration. Nonetheless, it’s a good budget ereader and gives the more basic Kindles a run for their money.

But What About Tablets?

Tablets tend to be geared towards a wider audience, so I haven’t included them in a roundup of the best ereaders. The above are all dedicated ereading devices. But if you’re after a tablet, check out this list.