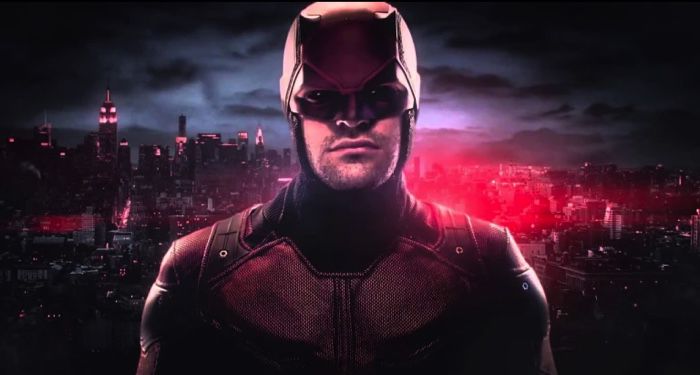 As always, this year’s San Diego Comic Con was full of announcements from Marvel and DC about upcoming projects, but the ones that brought the most joy to my heart all involved the triumphant (re)return of Charlie Cox’s Daredevil to the MCU. Not only will Cox and Vincent D’Onofrio’s Kingpin be returning for 2024’s Daredevil: Born Again, but the Man Without Fear will also be appearing in this month’s She-Hulk and next year’s animated Spider-Man: Freshman Year.

Daredevil is my all-time favorite Marvel superhero, so I am thrilled by this bounty. If you’re looking to read up on ol’ Hornhead, here’s my list of the best Daredevil comics of all time.

I do want to note that as with most long-running superheroes, the creators who have worked on Daredevil over the 58 years of his existence have been overwhelmingly white and male. While this is understandable for the 1960s, Marvel (and DC) has made only marginal improvements in hiring creators of color and women and non-binary creators in recent years, and still has a long way to go. While we wait impatiently for them to catch up with the 21st century, check out these comics by creators of color or these comics by women. 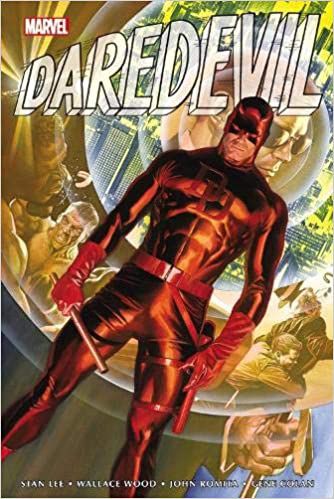 Daredevil didn’t really become the character we know today until the 1980s, but he’s been around since 1964, and if you enjoy Silver Age Marvel, Matt Murdock’s early adventures are a lot of fun. I know this omnibus’s price point is a little steep, but you can find more affordable collections (albeit with fewer issues contained in them) as part of the Mighty Marvel Masterworks and Epic Collection lines. Neither of those contain my favorite Silver Age storyline, though, in which Matt decides to pretend to be his own, sighted (imaginary) twin brother Mike Murdock, for Reasons. Decades later, Mike would become a real boy, because comics; this ended in tragedy, because Daredevil. 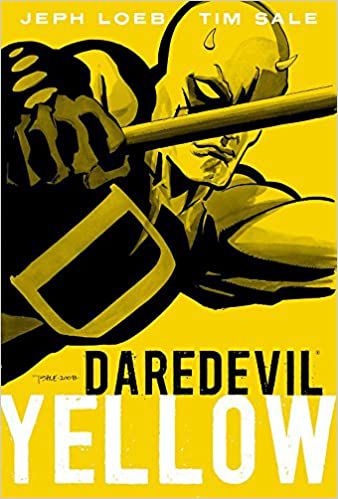 Want a more accessible look at Matt’s early days in costume? Daredevil: Yellow is a modern retelling of Matt’s years as a new hero, with predictably stunning art from the late, great Tim Sale. 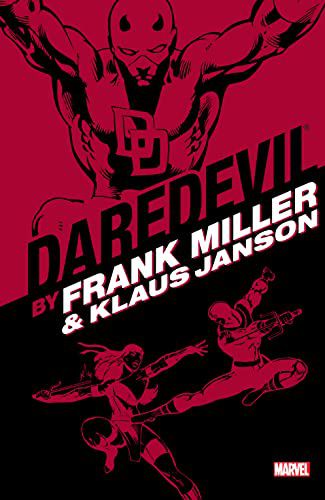 Frank Miller can be a divisive name in comics, but his early work on Daredevil remains both some of his best, and some of the greatest Daredevil stories ever told, which defined the character as we know him today. These comics introduce Elektra, Stick, and the Hand, and contain the first meeting between Daredevil and the Punisher. This volume also contains my single favorite Daredevil issue, #185, in which Matt’s gentle law partner and BFF Foggy is mistaken for a mob enforcer called “Guts” Nelson. Screwball comedy ensues, and is all the funnier for taking place in such a bleak noir landscape. I love it so much. 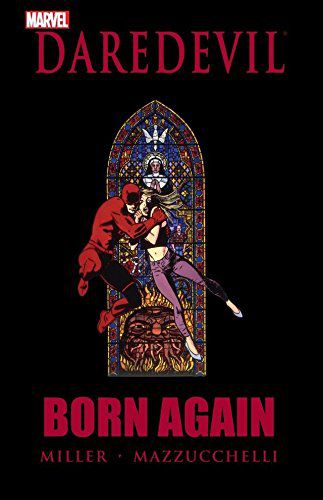 Miller’s magnum opus, at least as far as Daredevil is concerned, is elevated even further by the absolutely stunning work of the great Mazzucchelli. The Kingpin finds out that Matt Murdock is Daredevil, and destroys his life brick by brick. Admittedly the plot goes off the rails a bit towards the end, but the first three issues are a masterpiece. Read it before the 2024 adaptation arrives on Disney+. 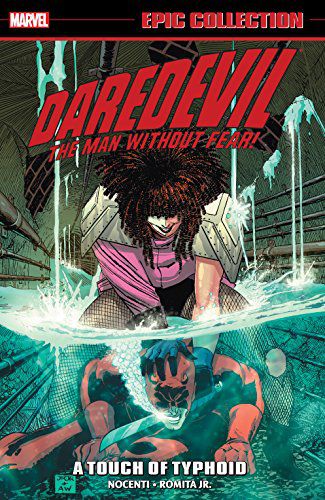 In the overwhelmingly masculine lineup of writers and artists who have worked on Daredevil over the years, Ann Nocenti’s 50+ issue run in the late ’80s and early ’90s stands out. Nocenti uses her run to interrogate both the nature of heroism and the roles society forces women into. I’m never sure if I actually like these comics, but I’m fascinated by them. Please read them and then come talk to me about them. 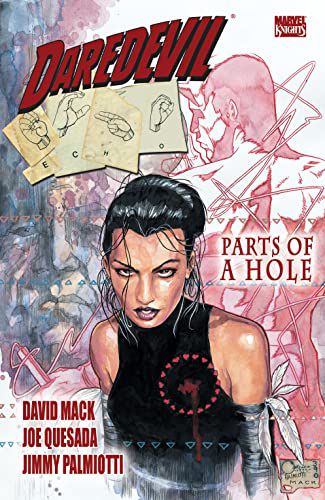 Daredevil: Parts of a Hole by David Mack and Joe Quesada

This gorgeous, dreamy story incorporates Mack’s intricate paintings and innovative layouts, and also introduced the character of Echo. It’s a great one-and-done if you don’t want to get bogged down in reading six decades of Daredevil history for some reason. 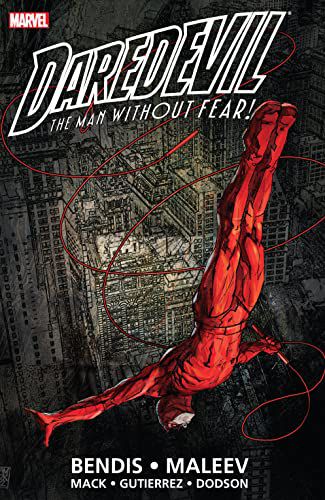 Bendis and Maleev are the other iconic team associated with Daredevil, after Miller, Mazzucchelli, and Romita. Over the course of this slow burning, character-driven run, Matt gets outed as Daredevil and his life spirals even more out of control than it usually is, which is saying something. More than any other Daredevil run, I’d say this one matches the feel of the 2015 Netflix show. 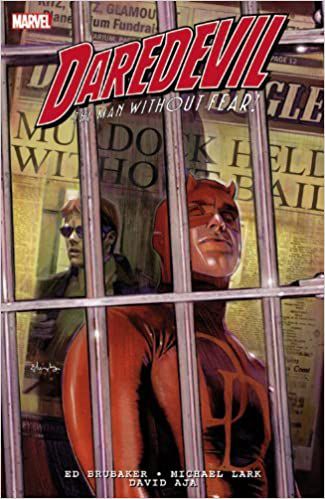 Picking up immediately after the Bendis/Maleev run, the Brubaker/Lark run begins with Matt in jail, where he’s been sent for the many crimes associated with, you know, Daredeviling. When tragedy strikes, Matt goes into full “I’m not trapped in here with you, you’re trapped in here with me” mode, and it’s delicious. The opening arc of their run, “The Devil in Cell Block D,” feels like the best season finale you’ve ever watched. One of my all-time favorite DD stories. 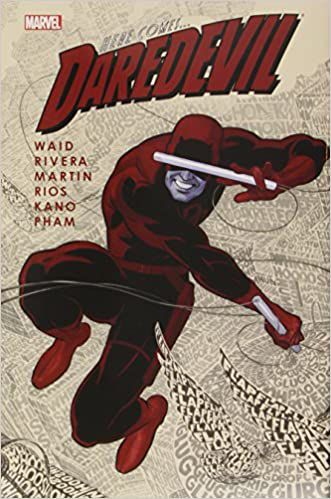 MY FRIENDS. THIS IS IT. THIS IS THE BEST ONE. Mark Waid wrote the entirety of both the 2011 and 2014 Daredevil series (Marvel likes to cancel comics and then launch them again with the same creative team, ignore their nonsense), first with the great Paolo Rivera on art, then with the great Chris Samnee. It’s a major tonal shift from most Daredevil comics since Miller, returning Matt to his roots as a swashbuckling acrobat. It also delves more deeply and explicitly — and for me, relatably — into Matt’s serious mental health issues than any other run. It makes for a perfect balance of light and dark. These are my favorite Daredevil comics of all time. Please read every single one of them. 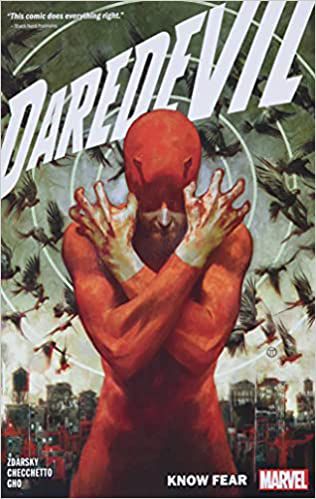 This run, which began in 2019 and ended earlier this year, quickly established itself as one of the greats. Matt is at his most in character when making an escalating series of (mostly) well-intentioned, absolutely terrible decisions that take his disastrous life from car crash to train wreck, and Zdarsky hits those beats perfectly. Marathon this series, and marvel at the poor choices one man can make. Then follow those choices through the Devil’s Reign crossover miniseries, followed by July 2022’s Daredevil #1, also by Zdarsky and Checchetto. I told you Marvel loves canceling and relaunching series with the same creators!

Have you read any of these Daredevil comics? Are you excited to see Red Batman back on screen? Do you love Foggy Nelson as much as I do? Let us know on social!