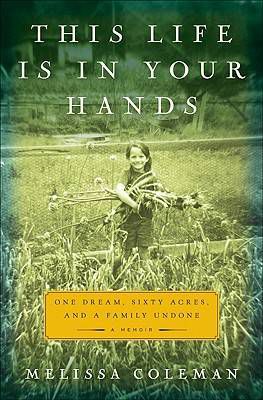 On my first pass through the 104 books I’ve read this year to come up with some “Best Of” lists, I came up with a “short list” of more than 25 books that I loved. Over the last week I’ve been whittling that list down to try and come up with five nonfiction and five fiction favorites. It’s been a struggle. (I know, #firstworldproblems.)

But I decided to go even further with these Book Riot picks and try to come up with two favorites from the entire year, the two books that I’ve been shoving at as many people as I can saying, “You really HAVE to read this book!”

Nonfiction: This Life Is In Your Hands by Melissa Coleman

This Life Is In Your Hands is a memoir about Coleman’s childhood as part of the back-to-the-land movement in the 1970s. Coleman’s parents, Eliot and Sue, are an idealistic couple that decide to give up modern life and start a farm on the rugged coast of Maine, trying to build a home of their own.

What impressed me most about this book is the way Coleman was able to build narrative tension into the story even though she reveals the big tragedy of the book in the first chapter. Not every writer can do that, and almost none can do it as elegantly as Coleman does in this book.

Fiction: When She Woke by Hillary Jordan

I loved The Handmaid’s Tale by Margaret Atwood, and I have a special, goofy place in my heart for The Scarlet Letter by Nathaniel Hawthorne, which probably makes me the ideal reader for When She Woke. Even so, this literary mash-up uses many of the best parts of the works that inspired it to create an astute and honest look at sexual politics and personal choice in a world so close to the world we live in now it’s spooky.

I have to give an honorable mention to The Magician King by Lev Grossman, which was just so fantastically amazing I almost don’t have words. However, in order to really love The Magician King, you have to read the first book in the trilogy, The Magicians, which seemed unfair for picking a single best book.