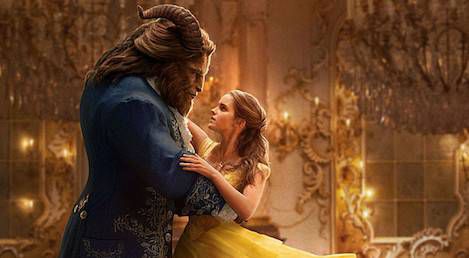 Beauty and the Beast has always been my favourite Disney movie, my favourite fairy tale. I know I’m not alone in this. I think Belle’s intelligence and literary nature have always resonated with book lovers.

Belle is a “beauty,” sure. But that’s not what makes her stand out. Not to anyone other than Gaston, at least. To the rest of the town, Belle is “odd.”  She stands out because she’s different. Because she dares to be herself—to be intelligent, well read, independent, and non-compliant (yeah, bitches!). She may be seemingly stuck in her “provincial life,” but reading books gives her a way out and makes her want more for herself.

This year we have the pleasure of a live-action remake starring Emma Watson as Belle and Dan Stevens as the Beast. Fans of the animation have been long awaiting its release, and it is finally upon us!

In its iteration of Belle, the new Beauty and the Beast does not disappoint. Emma Watson plays a delightfully feisty Belle, eager to devour book after book and share her knowledge.

In its bookishness, the new version does not disappoint either. Rather than a general love of books with a few hints to titles here and there, we get explicit references and bookish scenes.

Here are some of the best bookish moments from the live-action Beauty and the Beast:

When we first meet Belle, she’s making her way through the village. She has a book to return and wants to borrow another from a fellow villager. On the way, someone stops her and asks her what she was reading about. She replies, “Two lovers in fair Verona.” This, of course, is a reference to Shakespeare’s Romeo and Juliet—and it won’t be the last.

One of the villagers says that she’s “The only bookworm in town.”

When Belle gets where she’s going, Père Robert, the man with the books, asks her where she has travelled. She tells him she has been to two towns in northern Italy. This is another reference to Romeo and Juliet, and the towns she is talking about are Mantua and Verona.

Père Robert is not a bookseller like in the animated movie. He appears to be a fellow villager with his own small collection of books, which Belle has already made her way through. She grabs one she has already read and loved—the one in which the girl “meets Prince Charming, but doesn’t discover that it’s him ‘til chapter three!” This book is totally gorgeous with a gilt design. I was drooling.

When Gaston comes into the scene and decides that he simply must have Belle, he tries to flirt with her over books. Because he is, well, Gaston, this fails horribly:
Gaston: Wonderful book you have there!
Belle: Have you read it?
Gaston: Well, not that one. You know. Books.

When Belle later returns to the village to do her washing, a little girl comes up to her and sees that she’s reading. Belle begins teaching the little girl how to read. The headmaster walks by and sees what’s happening and becomes immediately incensed. He admonishes Belle. Surely, one girl that can read is more than enough to for any town. The new movie shows us further how Belle is different from everyone else in town, demonstrating how the village feels toward educated women.

Later, when Belle is in the castle, Cogsworth and Lumière are playing chess while she is sneaking around. Both of them are atop piles of books so they can reach the board!

After Beast goes to save Belle and is attacked by wolves, he is lying in bed recuperating. Belle is quoting Shakespeare, and he begins to quote along. Belle tells him that Romeo and Juliet is her favourite play. Beast guffaws and says that this choice is unsurprising and silly. Apparently he is not a fan of romances. He then takes her to the library because “there are better things to read.”
In the animation, Belle reads Romeo and Juliet to the Beast and he enjoys it. But we then find out he doesn’t know how to read. Belle teaches him. In the new version, they are both well-read and this is something they bond over.

The library, of course, is its own bookish moment. It’s huge and beautiful and brimming with gorgeous leather-bound tomes. The walls are completely lined with books, and it boasts a rolling ladder, the kind that every bookworm dreams of. Obviously, Belle is completely giddy over the library, and the fact that Beast told her, “It’s yours.”

From this point on, we see Beast and Belle bonding over books. In one scene while they are eating, they are both reading at the same time. As they become more comfortable with one another, books are always casually a part of the scene.

When they go for a walk outside, Belle reads poetry to Beast. One of the poems is “A Crystal Forest” by William Sharp.

Belle sees Beast reading alone in the garden. She approaches him and he tries to hide what he’s reading. Belle sees anyway, and says he is read Guinevere and Lancelot. He tells her he is actually reading King Arthur and the Knights of the Round Table—you know, “knights and battles and stuff.” Belle replies that it’s still a romance! I loved this scene because it shows that Beast is warming up to romance—in more ways than one!

Beast takes Belle back to the library to show her another “gift” from the enchantress. This gift is a beautiful, magical book. When Beast opens in, there is a map inside. He tells Belle that if she thinks of a place, can see it in her mind’s eye, and feel it in her heart, the book will take her there. And it does!

Finally, when the villagers storm the castle and are battling the inhabitants of the castle, the books join the fight!

Check out all of our coverage on Beauty and the Beast retellings, movie news, and more here.