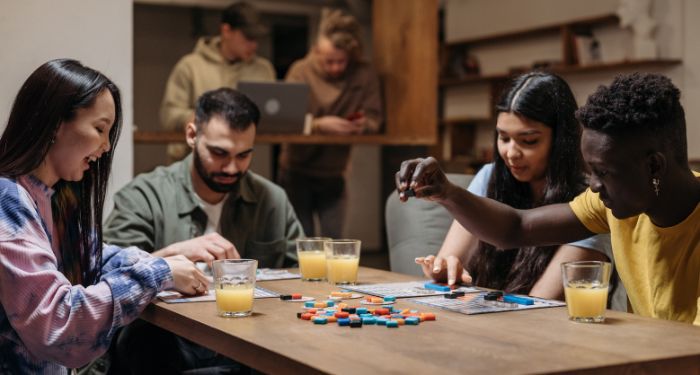 Board Games are the ultimate holiday gift. Now that gaming conventions are back, there are some fresh faces to add to our list of Best Board Games for Gifts. But no one wants to leave that sweet goodness in its original wrapping. We want to crack them open and play! Once those plates are clear, the table is just begging for you to set up a game and chill out with loved ones.

Now, I am definitely one of those people who brings a book to read at holiday gatherings (you can find my tips here), but the next best thing is to break out some board games. Gone are the days of only gentlemen sitting around the table after dinner, playing poker and whatever they thought gentlemen should do. Today, we are positively blessed with a wide and diverse range of games for everyone to play. This is the unifying activity where any age can join in and even the most inexperienced can bring their wildcard and smash the opposition.

When looking for the ideal game, there are a few things to consider:

Quick note: Age requirements are suggested only; believe me when I say kids are smarter than you think. Also, rules are made to be adjusted. You can adapt any rules to fit your playing circle. The core concept of any game is to be accessible to everyone, no matter the age, language, culture, or anything. House rules for the win!

Not every game needs to be bloodshed, okay? To be fair, there are enough competitive people in the world. Full confession: I, too, have been banned from playing Pictionary at family gatherings. Look, holiday gatherings can be volatile enough, so if you are looking for a stronger ‘team’ vibe, check out these cooperative games.

The ultimate cooperative game and probably the defining game in this genre. Forbidden Island is designed for two to five players, 10 years old and up. It requires very little set-up. The players take on the roles of an adventure team, who seek four sacred treasures hidden around the island. Players take individual turns but must work together to find the treasures and escape the island. With each turn, the game itself also has an action: raising the water level and slowly swallowing your path out. Good luck!

Class “Whodunnit?” with one player taking the role of ghost while the others work together to discover who killed them. The great news is you can play with up to seven players, from ages 10 and up. The ghost is able to give clues to the other players as images, working with them to beat the game. Mysterium is published by Libellud, known for its beautiful games. It is perfect for those who love a good cozy mystery and one of the best board games for cooperative storytelling.

This cooperative card game is designed for two to five players, all working together to build a spectacular fireworks display — perfect for a New Year’s Eve party. Players place cards in rows numbered one through five in matching colours. The trick is you can’t see the cards in your hand (but everyone else can). On your turn, you can play a card from your hand or give a clue to another player about their cards. No matter how great you think your communication is, this game will show exactly how clueless you can be!

Some games are perfect for killing a little bit of time between big events. Whether you’re travelling to a holiday gathering, or simply waiting for dessert, these are the games you can pull out and pack away without issue.

This one is fairly new, released last year and available in at least four different designs. Each set comes with six erasable boards, a set of four regular dice and four more ‘expansion’ set dice. Players can take turns rolling the dice, revealing tracks and roads you can use to design your own transport lines. The more exits you connect, the more points you collect. However, leave any transport lines incomplete, and you lose points. Each edition comes with its own expansion variations: red for Lava and Meteors; blue for Rivers and Lakes; lush green for Forest and Trail; shining yellow for Desert and Canyon. I recently tried this at PAX Aus, and it was so easy to learn and play.

This one is so brand new, you can only buy it from their website. But trust me when I say, it is worth it! This cute little card game suits two to six players from 7 years and older. The goal is to collect sets of Yum Cha from the window, plus a pair of tea cups to complete your meal. The mechanic is a simple ‘pick one up; put one down’ as players take turns drawing cards or taking from the discard pile. A little bit of luck, a little bit of strategy, and a lot of Paying More Attention to Your Cards. Yum Cha won PAX Aus Indie Showcase 2022 and was sold out before the end of the second day!

This super clever deduction game has players pitting against the computer to solve the puzzle while racing against each other. Bonus points for having this simple yet effective (and gorgeous) punch card component! Players must decipher the three-digit code that corresponds with clues provided by the computer. Make a hypothesis and test it against three of the provided clues by lining up your potential numbers with the punch cards. A tick is revealed if your hypothesis meets the rule, a cross if it doesn’t. When you have ticks for all three numbers, you have the code!

The game requires a little bit of set-up but a lot of replayable fun, with millions of additional puzzles available on their website. Turing Machine is playable solo or with up to four players. It says 14 years and up, but my 9 year old can play this once we helped her with some note-taking. This game is brand new in 2022 and quickly moving to the top of my Best Board Games list.

Start Young with Kid-Friendly Board Games

Speaking of 9 year olds, I am so jealous of my kids and all of the amazing games that are available today! Snakes and Ladders is a classic family game, but it is…well, repetitive. Time to spice it up and hook the kids on tabletop!

Cooperative games have really grown in popularity, but it can sometimes be hard to manage big age gaps in the players. Zombie Teenz Evolution is a quick game for up to four players aged 8 up, with an evolving storyline that grows each time you play it. There are four characters who work collectively to move supplies from four separate locations on the map. However, you can’t simply pick it up and move with it. You have to pass the crate to another player to move the supplies back to the School Headquarters, all while trying to avoid the zombies who Won’t Stop Spawning! Each time you play, you can mark it off on the Progress Track and unlock additional features in the game: story updates, new characters, and extra moves. If you beat the game, there are accomplishment badges. If you lose, it still counts towards your progress. Zombie Teenz Evolution is a sequel to Zombie Kidz, but it is a stand-alone game requiring no previous knowledge or experience. If you happen to have Zombie Kidz, the two games can be combined together.

It says it right there on the box: “A colorfully cutthroat card game of rainbows and revenge.” That should instantly tell you this is the perfect game for kids and will destroy families. From the same company that gave us Exploding Kittens, Mantis is a new party game for two to six players of almost any age. The goal is to have 10 cards in your score pile. There are only two rules: Steal or Score your way to victory by matching sets of cards.

Since Book Riot is a website about reading, I thought it was prudent to add some reading-related board games for my fellow book nerds. I see you. I’m thinking of you. These are the gifts for you.

Add this to the cart when you buy Mantis. And in all honesty, this is a game that should be given to lawyers everywhere. It’s a family-friendly party game played in teams of two, where players have to guess the word while their teammate is only allowed to give single-syllable clues. For example: You. Must. Speak. In. One. Sound. Words. And if you happen to use more than one syllable, there is a two feet inflatable club to remind you of the rules. Now, I’m not usually one for violence, but there is a lot of fun to be had with this game. Word of advice for my fellow writers: we spend so much time thinking of the most appropriate word to use, it is highly challenging to bring it back down to mono-syllabic communication. In other words: I. Have. Bump. On. Head.

This brand-new game is determined to set the story straight: HER story. It’s a family-friendly strategy board game for two to five players, from around the age of 8 years and up (mainly because it can take up to an hour for playtime). Each player is an acclaimed author writing a book about amazing women in history. You have eight chapters to write, each featuring a different iconic woman. There is so much history to learn, as well as develop an understanding of how we can retell our history. Bonus points: a portion of all proceeds from this game goes to the Malala Fund to help educate girls all over the world. The gift that keeps on giving.

One more for anime fans. Collectible card games are always popular. Take a look at Pokemon: The Card Game, Magic: The Gathering, and Yugi-Oh. Now you can bring My Hero Academia to the table! It’s a duelling strategy card game for two players, relying on how well you built your deck and how knowledgeable you are in using it. Being a new game, you are probably better off buying the ‘Two-Player Starter Set,’ featuring Izuku Midoriya and Katuski Bakugo. There are also booster packs available to add more specialised skill sets to your deck. Pro tip: Buy some card sleeves to protect your cards, especially any rare ones you find in booster packs.

If you are interested in checking out more new games, you can visit PAX Unplugged in Philadelphia (PA) from the 2nd to the 4th of December 2022. It will feature many new tabletop games, some still in the development stage, and areas to relearn the classics. You can also check out your local game store. They may not always be as cheap as you find online, but they know the best board games and can help narrow the list down for you. Ask if they have a game night for playing with friends and see how the dice roll.