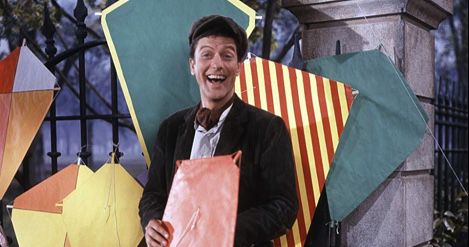 Mary Poppins Returns comes out on December 19. We see more magic that comes from a spoonful of sugar, in theory. And I hope the story is good.

Sadly, we won’t see Bert due to Dick Van Dyke being in his 90s and playing the banker Dawes Jr. instead. But we still see his successor, Jack the Lamplighter. Despite being a new character, Jack represents a common phenomenon from the Mary Poppins books: an ensemble member that brings out another side of Mary Poppins when she encounters them.

We first meet book Bert in “The Day Off” when Mary Poppins goes on a date with him, to take a break from the Banks family. He apologizes that he only got a handful of pennies for his chalk drawings so he can’t take her out to tea, and she politely tells him that she doesn’t mind. Coming from book Mary, who snaps a lot and cares about routine, this is a lot of kindness. They go into a chalk picture and enjoy tea after walking through the woods. Sadly, we get no dancing penguins in this one, and Travers would not have made something fanciful. The waiters are human, strict about time, but kind about service and not charging. Mary Poppins thanks them, and thanks Bert for the lovely time.

Bert makes only one other appearance, when he bids Mary Poppins goodbye in the third book. Other than that, he pretty much doesn’t exist in the book. The constable gets more screen time as he marvels at the city’s oddities. So why did Bert become such an icon?

Dick Van Dyke combines most of the fanciful people that Mary meets into one person. His Bert opens the film with a musical number about the wind changing, and something magical entering London. He then takes the viewer to Cherry Tree Lane, where the story properly starts. We already know we’re in for a ride before Mary had flown down from the sky.

Bert toes the line between fantasy and reality, and thus grounds people. Mary Poppins can enchant the children, but Mr. Banks finds her too fanciful and refuses to understand her methods. He needs another buffer, that being Bert. The chimney sweep knows Mary Poppins is magic, but also knows that the Banks family is running on an array of misunderstanding. Mr. Banks takes his children for granted, while Jane and Michael fear that Father hates them. When both parties get separated after the bank fiasco and Bert finds Jane and Michael running through the streets, he sits them down and talks to them about what happened.

He puts Mr. Banks’s life in perspective: the man has to go to a cold, dull job to support his family, and no one can look out for him because he is the adult. The kids know they can’t look after their father, but they can offer remorse, kindness and forgiveness. Then when Mr. Banks laments his dashed career and how Mary Poppins turned his life upside down, Bert reminds him that Mary Poppins is a magical being, and that one day his kids are going to grow too old for his affection. This kindness allows for Jane and Michael to apologize to their father and give the tuppence that started the bank fiasco, and for Mr. Banks in turn to show that they’re important to him.

What’s also important is that Mary and Bert don’t have a romantic relationship. They cannot realistically sustain one. Bert flirts with Mary during “Jolly Holiday” and dances with her, but she says she values his gentlemanly qualities, politely turning him down. Julie Andrews and P.L. Travers argued against anything more than friendship. Mary Poppins for one can’t stay in the same place. She has lots of children to visit and love. Bert also has lots of jobs to take, and friends to make. He spends his days in London, side-hustling for cash and making sure no one gets hurt. They live in two different worlds that occasionally collide. Going beyond their kind friendship would mess up the platonic bond they have. Plus, he would have to wait a long time for her.

We enjoy Bert as the Master of Ceremonies, who helps us believe in Mary Poppins. Bert also grounds us adults by reminding us that our responsibilities can make us seem cold to the ones we love, but we have to make sure not to give into that coldness.

The sequel to Mary Poppins promises to add more book elements. This includes the marvelous cast of creatures and beings that have seen in the preview, like the Balloon Lady and Miss Topsy Turvy. The first movie, for pragmatic reasons, had to rely on Bert to usher us to these oddities. Here, we need no such vehicle.

All in all, many people in London know and love Mary Poppins. They sell gingerbread stars, offer balloons to people who need a lift, or take her out to tea. Mary Poppins refers to the gingerbread in the film, but Uncle Albert’s flight takes her attention. Thus, it makes sense for the sequel to include a larger magical ensemble, to pay homage to all the magic that London already has, if you know the right person.

Jack is part of that ensemble, although he’s not in the book. Like Bert, Jack toes the line between the magic and reality. He helps the kids when Georgie chases after a runaway kite, greets Mary Poppins cordially and introduces her to the new generation of Banks children. When they don’t understand her brusqueness, he goes long for the ride and lends his bicycle to help them. She may have a sharper tongue and keener gaze, but she is Mary Poppins and she treats him kindly.

It’s going to be hard to say if Bert will create a legacy of grounded magical beings. “What is a legacy?” as Lin-Manuel Miranda asked in Hamilton.  His character will have to bear that torch.

No matter what happens, we know Jack and the others will take us on a ride. And by all means, sign me up to fly a kite with him, or ride a ladder on a lamplighter’s bicycle.