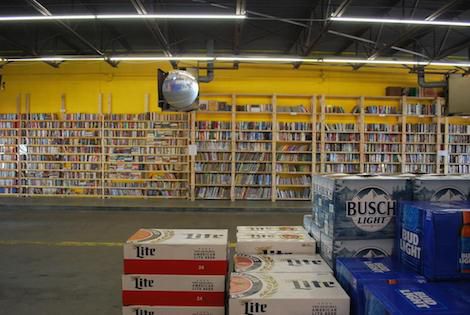 Not long after, the books arrived, and so did Hinson. Since Dave’s Drive-In Liquor store added a bookstore, Hinson has made at least five visits to browse the wide selection.

“I’ve actually purchased a lot of books from there,” Hinson said. “I have three children, and they have awesome kids books from beginners all the way up to teens.”

Making plans for a trip to Nebraska’s drive in liquor/bookstore, hbu?

Today In Books Newsletter
Sign up to Today In Books to receive daily news and miscellany from the world of books.
Thank you for signing up! Keep an eye on your inbox.
By signing up you agree to our terms of use
____________________
But very little is known about whether readers respond in clinically relevant ways to poetry, fiction, or other narrative genres, such as memoir. The lack of evidence has not prevented a range of claims and theories from being proposed, and small-scale clinical uses of fiction and poetry by psychiatrists and psychotherapists seem to be fairly widespread.

So is the belief in art’s healing power just wishful thinking, or is there something to it?

Absolutely fascinating research on the impact of reading on those who have eating disorders.

After years of relatively little change in the library e-book market, there has finally been some movement—unfortunately, librarians say, it is movement in the wrong direction. Leading Sci-Fi publisher Tor Books, a division of Macmillan, has announced that, beginning with July 2018 titles, newly released e-books, will be no longer be available to libraries for lending until four months after their retail on sale date.

This is such a terrible idea that will ultimately hurt readers—and the authors.