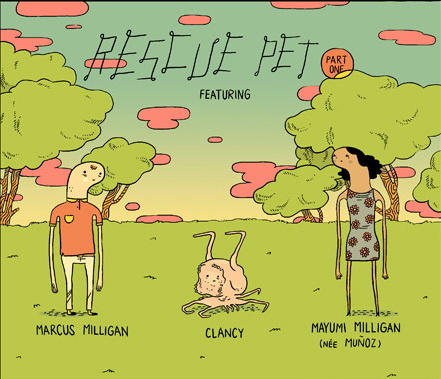 Clancy, the titular character in Michael DeForge’s Rescue Pet, is ostensibly a dog but looks “kind of like a cooked shrimp.” He can talk, but it’s mostly limited to repeating phrases back to people, poorly. He’s got weird bony growths on his face instead of fur. Oh, and he can shapeshift into something resembling a man. Sometimes he performs humanity better than his human owners. Clancy’s story is told over four parts, originally serialized in Maisonneuve Magazine and then published online for free.

Marcus and Mayumi Milligan are having marital problems. Or at least Mayumi is; Marcus, oblivious, adopts Clancy and spends more time playing with him than conversing with his wife. Even when Mayumi finally snaps and tells him she’s been crying herself to sleep for days, he just stares. “Say something!” she begs, but he can’t.

Intimacy is a funny thing. What does it mean to share your life with another person? How to we demonstrate that closeness? One day after Marcus leaves for work, Clancy transforms, growing larger and changing color to mimic his master. Mayumi sees Clancy, tall and shaking, but thinks he’s Marcus. Marcus, finally being vulnerable and emotional. Marcus, telling her “Aisle aff yuu” in response to her declaration of love. Marcus, finally listening to her. When the real Marcus comes home after work, Mayumi thanks him for being so open with her that day. Marcus is confused, but says nothing, taking advantage of the goodwill he didn’t earn.

Marcus is kind of a jerk, even outside of his relationship with Mayumi. In the very first panel, we see him insulting Clancy just so he can hear Clancy repeat it back, insulting himself. When Clancy does something bad on a walk in the park, Marcus yells at him and jerks the leash, hard. Later that day, Clancy bashes Marcus’s head on the mirror and then pretends to be him, charming Mayumi and her mother just by listening and laughing to their jokes. It’s amazing what we can ignore (drooling, dead eyes, four legs) when people are nice to us.

Clancy still loves Marcus, though. After eating some chocolate from Mayumi’s mother, jumping out the window, and running away, Clancy is so happy when Marcus comes to find him. He transforms back to his original shape and rubs up on Marcus’s legs while Marcus looks down, horrified by the knowledge of what his dog can become.

Marcus and Mayumi do finally come together as a couple in deciding what to do with Clancy. Mayumi cries in Marcus’s arms, much like she did earlier with Clancy-as-Marcus. They ultimately decide to leave him in the woods and hope for the best. I won’t completely spoil the ending but let’s just say that Clancy, like all dogs, resembles his owner in behavior as well as looks.

Rescue Pet has amazing writing, but the body horror of Clancy’s transformations really comes to life with DeForge’s art. Do yourself a favor and check out Rescue Pet immediately, and then go home and give your loved ones a hug.