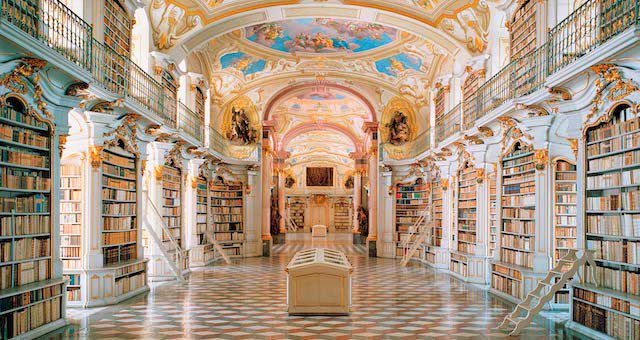 Critical Linking, a daily roundup of the most interesting bookish links from around the web, is sponsored by Book Riot’s Amazon store. Shop our favorite summer reads (including some of our favorite books of 2019 so far), bookish accessories, deals, and more.

“Take a look at some of these truly stunning libraries from around the world. They aren’t the only beautiful libraries you can see across the globe, but they certainly should be on any bibliophile’s bucket list.”

“We don’t often talk about accessibility in RPGs. Sure we’ll talk about inclusivity and representation–you can find books that feature characters of many different genders, skin tones, sexual orientations, and even physical ableness. Though this last one is especially rare. Off of the top of my head Waterdeep: Dragon Heist features a dwarf with a crossbow prosthesis, and there’s one or two blind NPCs out there (though by and large this latter kind of representation is rare, outside of the Dragon Prince). But what about the players? How accessible are the books?

Well, thanks to the National Library Service for the Blind and Physically Handicapped at the Library of Congress, D&D is about to be a lot more accessible.”

“Likewise, a number of big, bestselling “girl” books (I’m using it as an umbrella term for all the sister/woman/wife/mother books as well) have been written by women. On top of that, we’ve been seeing a new trend of male writers taking on female or neutral pseudonyms to write in the genre. This isn’t something often seen before, in suspense or literature as a whole: imagine going to the book signing of Amantine Dupin to find yourself face-to-face with George Sand. (As for us female authors, we can either feel gleefully vindicated that the roles have been flipped or roll our eyes when those books get giant advances and a marketing budget bigger than the GDP of some countries.) And I think it’s safe to guess that a large part of the audience is women as well—the very same women who have been condescended to for years by smug pop culture that assumed we don’t want cerebral entertainment and shy away from dark themes. But the readers proved it wrong with Gone Girl in 2012, and have continued to prove it wrong since. ”

This piece about the “girl” title trend is interesting. From the perspective of helping people find books, I think it’s a pain though: they all blur together.