Beat the Algorithm….in which we pit bloggers against Amazon’s algorithm for recommendation supremacy…

Last week, Rachel defeated Amazon in a Game of Thrones showdown. This week, Ken from Manhattan is looking for something great to read after loving Matterhorn by Karl Marlantes. Here’s what he wrote:

I loved Matterhorn pretty much from the first word. I don’t often read stories of war but Karl

Marlantes drew me into his story through the main character’s thoughts and experiences of war and life–and how they change. Matterhorn combined the trials and tribulations of war with race relations through a young man’s perspective, but with Marlantes’ hindsight. He wrote in a style I tend to enjoy, or what I assumed the style to be, “autobiographical fiction”, and I believe it was Marlantes’ personal experiences in the Vietnam war which gave the book honesty and perspective that is hard to find in a novel.

Alright, lets get right to it then.

Here’s what Amazon recommended: Fields of Fire by James Webb.

They were three young men from different worlds plunged into a white-hot, murderous realm

of jungle warfare as it was fought by one Marine platoon in the An Hoa Basin, 1969. They had no way of knowing what awaited them. Nothing could have prepared them for the madness to come. And in the heat and horror of battle they took on new identities, took on each other, and were each reborn in fields of fire….

Fields of Fire is James Webb’s classic, searing novel of the Vietnam War, a novel of poetic power, razor-sharp observation, and agonizing human truths seen through the prism of nonstop combat. Weaving together a cast of vivid characters, Fields of Fire captures the journey of unformed men through a man-made hell — until each man finds his fate.

And, carrying the banner for carbon-based kind this week is…..well….me. I raved through all of 2010 about Matterhorn, so I couldn’t sit idly by here.

Here’s my recommendation: The Hunters by James Salter

“Matterhorn was the best book I read last year and I loved it for many of the same reasons you did. Here’s what you should read next: The Hunters by James Salter. And here’s why: though it’s also a war novel written by someone who knows of what they write (Salter flew the same planes in Korea that he writes about here), the real similarity it has with 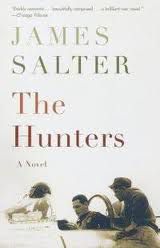 Matterhorn is a singular focus on character and relationships. Instead of front-line grunts, however, The Hunters is about a squadron of fighter pilots in the Korean War.

The central storyline is as simple as it is classic. The main character is the ace, and his supremacy is unquestioned until a young punk cockpit jockey challenges him. So there is not only the peril of aerial combat, but also a secondary current of turf-protecting and ego. Two other things about The Hunters to seal the deal. First, the prose. My god, the prose. Salter is probably the most accomplished of the Hemingway acolytes, and he does for jet fighters what Papa did for bull-fighting–made it beautiful, but somehow also kept it brutal.

And finally, it has a great, great ending. Seriously, an all-timer. It’s sad, and hopeful, and surprising, and yet somehow totally expected, just like the rest of the novel.”

Alright, well now the bout is in Ken’s hands. He’ll score the rounds and let us know who won. Look for the judge’s decision on Friday.

If you’d like to be a participant in Beat the Algorithm, either has recommender or recommendation-seeker, send us an email: community (at) bookriot (dot) com