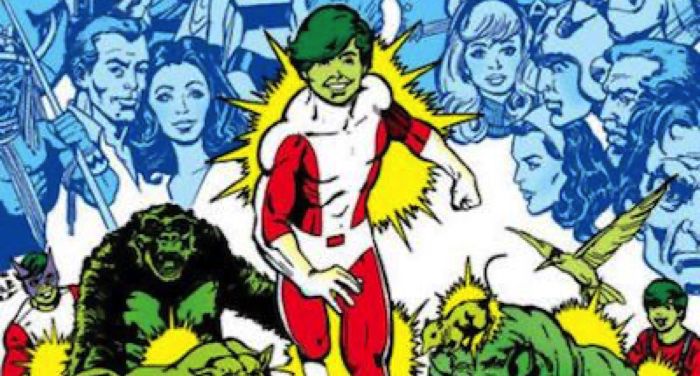 In my semi-regular Fashion Disasters series, I highlight the poor sartorial choices of superheroes who just can’t seem to get their act together. Superhero comics truly are the gift that keeps giving for those of us who are endlessly entertained by spandex wrought hideous, but every so often a hero comes along who flips the script. Who serves looks from their debut appearance onward. Who looks at the genre’s weird headsocks and tiny gloves and excessive zippers and says: “Not today. Not ever.” They are the few, the proud, the Fashion Heroes. Today: Garfield Logan, Beast Boy (and sometimes Changeling)!

Beast Boy may seem like a bit of a left field choice, since he’s a bright green teenager and also sort of a goofy dork — not exactly the kind of character you would rely on for consistent stylishness. But I’ve been backreading a lot of Teen Titans over the past year, and I realized that my boy Gar has been quietly killing it pretty much from the jump, and I think that deserves some acknowledgement. So let’s acknowledge!

Gar debuted as Beast Boy in Doom Patrol #99 (November 1965). Initially he didn’t actually have a costume, just a fuschia jacket and a bad attitude. But look at that pompadour! Look at those Cuban heels! He’s 1960s civilian chic and I love it.

(What I don’t love: originally, instead of turning into green animals, he turned into regular colored animals with a horrifying green human face.

Thankfully, this was quickly changed to the all-green all-shapeshifting boy we know and love today.)

We do see one of his few missteps here, though. See, Gar was still attempting to have a secret identity at this point, but since he’s, you know, green, he had to hide his entire face while in costume. Instead of a full mask a la Spider-Man, he went with a horrifying fake purple head, with a second, yellow mask on top of it. With pointy ears. For some reason. In his defense, however, he was like 10 years old and had also been orphaned at least twice by this point. We’ll give him a pass!

By the late ’70s, when Gar joined the first incarnation of the Titans West, he was still wearing a mask but had toned it down considerably:

It still looks stupid, yes, but not nightmare fuel. Progress! It’s also completely pointless, because at this point Gar was starring on the television show Space Trek: 2020 (yes) and, like, there’s only so many famous green animal shapeshifters in the world, even in the DCU. But it’s fine.

Thankfully, only a few short years later, Gar joined the New Teen Titans, and like everyone on that team, got a sexy angsty teen makeover (and a new codename)!

This is still very obviously inspired by the bones of his Doom Patrol costume, but significantly improved upon. The color blocking is more interesting without being overly busy, and the random purple elements are gone. I’m also eternally impressed that Gar managed to have a look that’s all red, white, and green and never wound up looking Christmassy.

Gar adhered faithfully to this look for nearly a quarter of a century, though he did get a bit, um, experimental when it came to his civilian attire:

Gar finally switched it up with a new costume in 2003’s Teen Titans, which was also the first (but not nearly the last) time he randomly dropped a few years in age overnight:

He’s clearly taking a page from the book of his fellow green-skinned hero She-Hulk (a Fashion Hero herself) and switching to purple as his dominant costume color, and it works! The secondary colors play well together, and the white and overall shape of the color blocking establish continuity with his classic look, while the short sleeves add a little extra boyishness. The visible piping is very much of its time but not as overwhelming as on some costumes of the era. A solid update!

Gar briefly experimented with a black and purple look obviously inspired by the 2003 Teen Titans cartoon during the One Year Later arc, but this didn’t last. It’s not bad (and the animated look is great), but so many heroes have black costumes — Gar is usually a refreshing pop of color, and I’m glad he returned to that quickly.

In the late 2000s, Gar took a turn for the more animalistic, with suddenly pointy ears, shaggy body hair, claws, and a cute li’l fang also clearly inspired by his animated design. I don’t…love the feral look, but I’m not counting it against him because we’re talking about fashion and he can’t control the pointiness of his ears. (Can he? He is a shapeshifter…)

His costume changed with this, switching to more of a horizontal chevron-patterned color blocking instead of his usual vertical panels, and, more notably, cutting off just above the knee, presumably because…his toes have claws now and he can’t wear shoes? Unclear.

But I actually kind of love the shorts? The overall look strongly resembles a wetsuit and gives him a youthful, surfer-ish aesthetic that’s extremely fitting for his carefree personality. It’s fun!

Gar sort of rotated through slight variations on this look — shorts and bare feet vs. long pants and boots, chevrons vs. vertical paneling — until the New 52 reboot, probably because artists weren’t talking to one another.

Look. The New 52 was kind to no one, so within that context, this isn’t actually that bad? According to the former “it’s not his fault if his ears are pointy” rule, I’m going to argue that it’s also not his fault if he’s red now for some stupid reason. So really the only things to consider here are 1. the shorts themselves, which are a perfectly fine pair of shorts, and 2. the decision to wear nothing but shorts in the field, which is maybe less fine. I mean, you do you, Gar, but you might be making some people uncomfortable. Also, I don’t know why his legs have glowy things on them. But this is a rare dip in sartorial consistency from our furry friend, so I’m not going to be too harsh on him. (About his costume. His life choices are fair game.)

Besides, he was green again and back with the Teen Titans soon enough:

On the one hand, going all black and white renders this costume a little bland compared to his usual pops of red or purple. On the other hand, he’s the only person on this cover not wearing a complete eyesore, which I think proves my point. As you were, Gar.

Rebirth put him back in the red and white, this time with the guns fully out:

I have zero complaints about this costume, and also this cover is a delight.

He briefly flirted with the purple and black again during the No Justice event, mostly because he was on the purple team:

As stated above, I prefer the red and white, and I’m not a fan of the weird glowy circles everyone’s wearing for some reason, but the cowl neck is cute. More importantly, this series is about the Justice League teaming up with some of their worst enemies to face a potentially planet-destroying threat, and at some point off-panel they apparently decide that they can’t possibly defeat said threat without making special color-coordinated team costumes first, like they’re competing on Legends of the Hidden Temple or something, and that’s amazing. Go Purple Parrots!

With that exception, Gar’s pretty much stuck to the same look throughout Rebirth, except his pants turned into, like, weird flared highwaters during the out-of-continuity Titans: Burning Rage series for some reason?

I feel like he’s about to invite me to a clambake as soon as Robin gets done punching him. (I will say yes, obviously.)

Most recently, Gar has merged with his longtime BFF/life partner Cyborg in the possible future/alternate universe/continuity headache that is the Future State event to create “Cybeast”:

I’m sorry, I laugh every time. If this was a permanent change I’d hate it, but as a two month exercise in nonsense I find it extremely entertaining.

Regular continuity Gar will be returning in March in Teen Titans Academy as a mentor to the next generation of superheroes. We don’t know what his costume will look like yet, but I think it’s a safe bet that it will be a) red and white or maybe purple and white and b) stylish as hell. If only all superheroes could be so reliable!