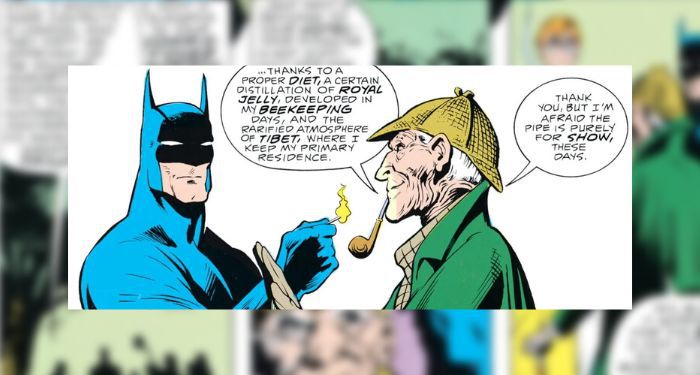 When you ask someone to name the greatest detective in fiction, they will likely answer one of two ways. The classic literature fans will say Sherlock Holmes, and the comic book nerds will say Batman. Both men have become icons for their fancy duds, great brains, and memorable sidekicks. Sure would be nice if they could team up, huh?

Fortunately, little things like the laws of time and space are no barrier for DC Comics. In Detective Comics #572, to commemorate the series’ 50th anniversary, we got not only a love letter to the title as a whole, but the team-up of two centuries…ish. And it’s a Christmas story to boot, so it’s seasonal, too!

We start not with Batman but with Slam Bradley, a detective character conceived by Superman creators Jerry Siegel and Joe Shuster, who appeared in early issues of Detective Comics. Slam has no sooner met his latest client — an Englishman, Morgan, who claims his fiancée was just kidnapped — when a group of thugs with machine guns burst through the door. Batman and Robin to the rescue!

Unfortunately, Morgan ends up getting kidnapped anyway, so the Dynamic Duo heads off to London while Bradley continues the investigation stateside. He makes the rounds of Gotham’s crummiest bars and neighborhoods until he finds the missing girl and helps her escape. Once they are safe, she reveals that Morgan’s real name is Moriarty, and that her own name is Mary Watson. Dun dun DUN!

Now the Holmes stuff truly begins. In London, yet another detective, the Elongated Man, shows up. Why Elongated Man? He had a long-running back-up feature in Detective Comics starting in 1964. He stumbles upon another Moriarty (not the kidnap victim), who is determined to destroy a recently rediscovered Sherlock Holmes manuscript.

The manuscript, “The Adventure of the Red Leech,” tells the story of a young doctor who has been having memory lapses. Since he is about to join Queen Victoria’s medical team, he wants to figure out what’s going on as stealthily as possible so as to avoid scandal.

This is a real treat for Holmes fans, I must say. You’ve got all the elements of the classic stories — Holmes waking up Watson in the middle of the night, “the game is afoot,” etc. — and the art is nice and shadowy. There’s even a wink-and-nod to fans of the Basil Rathbone films: the client’s name, Nigel Brewster, is a reference to Nigel Bruce, who played Watson in those films. I guess Arthur Conan Doyle is a psychic in the DC universe?

The solution to this mystery is quite weird, but in keeping with a superhero comic. Brewster’s wife, an agent of Moriarty’s, had been keeping him docile with a leech with anesthetic properties. With Brewster indisposed, a doppelgänger could get to the queen, kill her with a leech, and allow Moriarty’s allies to take power.

So why did this evil Moriarty descendant want to destroy the manuscript? He was afraid it would tip people off to his own plans to kill the queen (Elizabeth II this time, obviously). We then see our heroes teaming up to stop his schemes and rescue his hapless cousin, the not-evil Moriarty. It all culminates in this fantastic image of Batman punting a bomb disguised as a book while the royals look on in terror.

But there’s one more surprise! Batman had previously discovered that a Scotland Yard detective was in on the plot and tries to chase him down. Instead, he receives a timely assist from an old man with a deerstalker. Yes, Sherlock Holmes is alive and well! In 1987! You’ll never guess how that happened!

You heard it here first, folks. Sherlock Holmes discovered immortality through beekeeping and living in Tibet. Who knew it was that easy? (He does not appear to have shared this secret with Watson, who is dead and is the direct ancestor of our kidnap victim, Mary.)

So that’s our big crossover. What did you think?

This is absolutely not the story I was expecting from the cover, which features a young Holmes sitting at a table while Batman reads over his shoulder. I really thought I’d be getting something similar to the Batman: The Brave and the Bold episode “Trials of the Demon!” where Bats and Holmes (and Watson) teamed up thanks to the magic of time travel. I can’t believe a comic book cover lied to me.

Though it’s revealed that Holmes was sort of orchestrating things from behind the scenes the whole time, there is very little in the way of an actual team-up. Instead, this was a tribute to Detective Comics itself, with Holmes more like the star of an old TV show making a cameo to give his blessing to the remake: after all, the stars of Detective Comics all owe a big debt to the world’s most popular detective character.

It’s still a fun story. But if you’re here solely for the Batman/Holmes crossover, you’ll probably be disappointed.

Lucky for us, the last few Sherlock Holmes stories are entering the U.S. public domain as of January 1, 2023, so the Doyle estate will no longer have grounds to pull nonsense stunts like suing Miramax and Netflix for daring to give Holmes an emotion. (I could explain why the whole premise of these lawsuits is a giant load, but that is not my purpose here today, so you’re off the hook.) Hopefully, this means creators from companies big and small will now feel free to take Holmes in even wilder, more creative directions than ever before!