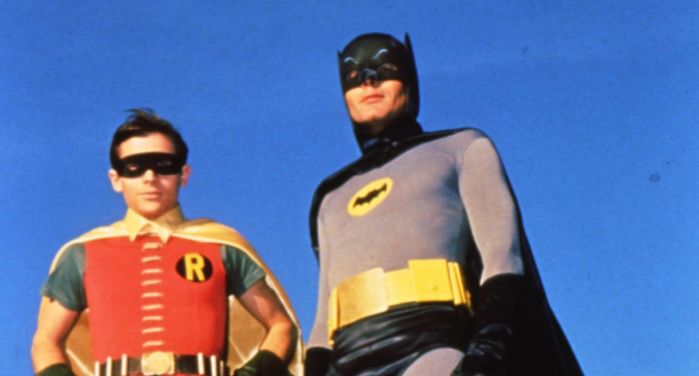 Back when it was still on the air, the show was massively popular. Its reign was short: it debuted in January 1966 and was off the air by mid-March 1968. For those two years, though, if you hated Batman, you were SOL. Bat-merchandise flooded stores. According to one newspaper article from the period, the show “capture[d] a majority of the audience” in its time slot by the end of the first season. Its popularity inspired the hurried production of a feature film, Batman: The Movie, released in the summer of ’66.

In more recent years, references to the series have become fairly common, as this Wikipedia list shows. Currently, the list starts at 1978. While this demonstrates Batman‘s enduring legacy, it provides no indication of how popular the series was during its heyday, or how extensively it pervaded pop culture in the mid- to late ’60s. So here’s me, filling in the gaps. You’re welcome, world.

You’d think being trapped on a tropical island with only a transistor radio for company would make the castaways of Gilligan’s Island immune to Bat-mania. Yet in the third-season opener, “Up at Bat” (original airdate: September 12, 1966), there are two Batman references.

This episode has Gilligan fearing he’s been turned into a vampire after a bat bite. When the Professor suggests concocting a vampire cure for him (really an herb-based placebo), the Skipper sarcastically asks, “What school did you go to, Batman U?” Later, in a dream sequence, Gilligan-as-Dracula gets into a fight where every hit is punctuated by on-screen sound effects (“pow, “ooof,” etc.), just like Batman‘s fight scenes were.

The Monkees paid their own tribute in two different ways. There are several episodes where you can see what is clearly the Bat-phone, complete with protective glass covering, in the Monkees’ house. In “Dance, Monkee, Dance” (December 12, 1966), Peter uses it when he is conned into accepting a “free” dance lesson.

In the second-to-last episode, “The Monkees Blow Their Minds” (March 11, 1968), the Penguin (Burgess Meredith) appears in the audience while the Monkees sabotage an evil hypnotist’s nightclub act. This entirely pointless cameo marks the last time Meredith appeared as the Penguin, and the only time he played the character outside of Batman.

Green Hornet, as Batman‘s sister show, naturally paid homage to its predecessor. In “The Secret of the Sally Bell” (December 9, 1966) and “Ace in the Hole” (February 10, 1967), Batman appears on TV screens as characters either actively watch the show or change the channel.

Even when Batman wasn’t directly referenced, its presence was felt, sometimes when it shouldn’t have been. The Man from U.N.C.L.E. (my beloved) died of self-inflicted Bat-mania wounds. In “The Bat Cave Affair” (April 1, 1966) from Season 2, Batman is not mentioned, but the involvement of bats was certainly no coincidence. And the episode really hams it up, making it more in line with Batman‘s tone than its own. (The series formerly relied on subtler humor.)

In Season 3 of The Man from U.N.C.L.E, they took things further, hiring composer Nelson Riddle to score an episode. Riddle did extensive work on Batman, and his distinct compositions are indelibly linked with that series. Worse still, they plunged wholeheartedly into Bat-style camp, rendering the show unrecognizable.

Season 4’s attempts at overcorrection failed, and the series was abruptly canceled in January 1968 — just two months before Batman, having also overdosed on camp, came to an end.

I should note that none of these shows, except for Green Hornet, aired on the same station as Batman (ABC): Gilligan’s Island was on CBS, while The Monkees and The Man from U.N.C.L.E. were on NBC. So those references cannot be attributed to network execs trying to promote Batman by mandating references on their other programs: this is a clear sign of competing networks reacting to Bat-mania in their own ways. Those ways mostly involve throwing Bat-references at shows that were either past their prime or well on their way there, possibly trying to make Batman‘s success their own. It did not work.

The Fortune Cookie (1966) is a black comedy starring Jack Lemmon, an injured cameraman, and Walter Matthau, his scheming brother-in-law who convinces him to participate in an insurance scam.

Two suspicious insurance agents spy on Lemmon, but one is less invested than the other. His reaction when he learns the parties have settled? “Good. I can wrap up and still get home in time to watch Batman.”

Unlike the TV references, which sought to boost their own profile through Batman, this one is meant to reflect the culture it was made in — and maybe garner a cheap laugh or two — by having the characters enjoy the same things their audience would have. It’s the same reason Iron Man 3 namedropped Downton Abbey and the 2007 Nancy Drew movie mentioned Smallville.

DC Comics referenced the show from time to time, although it would probably be more accurate to call them self-plugs. In Teen Titans #13 (cover date: February 1968), a billboard exhorting the audience to “watch Batman on ABC” can be seen in the background in one panel.

The cover of Batman #183 (August 1966) has Batman refusing to go out and fight crime because he’d rather “stay in the Batcave to watch myself on TV!” Unlike some covers, which lie shamelessly, this one is accurate: this exact scene does occur in the comic, though rather than watching the actual ’60s series, it is understandably reframed as a “TV documentary” about Batman. And it’s not Batman behaving so irresponsibly: it’s a phony bent on revenging himself on the Dynamic Duo by blowing up the Batcave.

Got any ’60s Batman references from the ’60s that I missed? Tell me on Twitter! (No, seriously, I need to know.) For now, here’s more bat content for you: