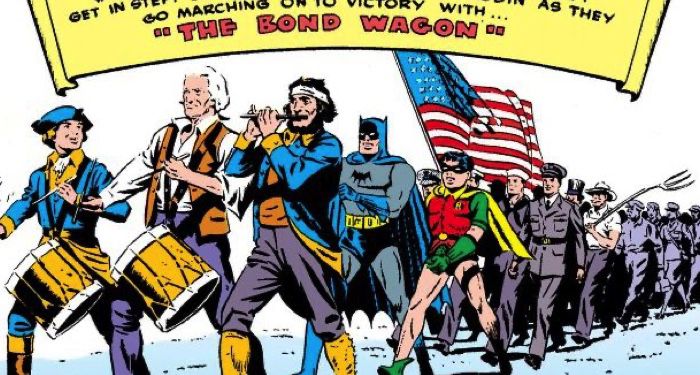 You’d be hard-pressed to find any group of comics with more flag waving and fascist bashing than those published during World War II. That isn’t always a good thing: these comics often present an oversimplified view of the conflict while very literally demonizing all Japanese people. But it isn’t all doom and gloom; many of these comics can also be deeply entertaining. Like today’s subject!

This story comes to us direct from Detective Comics #78, originally published in the summer of 1943. This was the second summer after America entered World War II, but the war had been raging since 1939, and comic book superheroes had been in the fight for years by this point. So this issue wasn’t presenting anything that contemporary audiences hadn’t seen plenty of times before. “Anything,” in this case, being Batman and Robin punching Nazis, with a side order of curing a guy of post-traumatic stress disorder.

(Needless to say, this comic has a well-meaning but inaccurate view of what mental illness is like. For comics that handle that subject with more care, try the recommendations in this article.)

We begin with such a ham-handed call to action that I almost want to stop reading out of pure spite.

What interests me about this comic is the acknowledgement that not all Americans are gung-ho about the war. While chilling at home, Robin mentions that “people complain about rationing” and could use a reminder of real patriotism, as exemplified by Revolutionary War heroes like George Washington and Thomas Jefferson. It’s a minor moment, but it does set off this hilarious chain of events.

Batman’s idea of being patriotic involves pushing everyone and their mother to buy more war bonds, which sure is…an idea. And he knows just how to go about it: he takes out an ad in the paper asking for civilians who look like famous historical figures to participate in a “bond wagon.” The bond wagon will serve as a traveling fundraiser, reenacting historical events and selling war bonds across America. Gee, I sure hope the Joker hasn’t escaped Arkham this week, because Batman is busy with THE THEATER!

Among the volunteers is this ex-Marine with what we would now call post-traumatic stress disorder. The language they use is definitely outdated, but at least Batman shows him some compassion.

There’s also an ex–football player who was falsely accused of throwing a game. Batman casts him as Nathan Hale, the martyred spy.

Enough background. I promised you Nazi punching, and by George (Washington), you will get it. But we need some Nazis first: specifically, this loser Baron von Luger and his men. They are so threatened by Batman’s little roadshow that they devote themselves to sabotaging it. Needless to say, they muck it up at every turn.

As the bond wagon rolls along, the actors I mentioned get a chance to shine. Wilkins (the guy with PTSD) magically overcomes his mental illness through the power of hating Nazis. Meanwhile, the football player redeems himself by proving he’s honest, despite von Luger deploying this absolutely stellar bit of logic.

Anyone else getting the impression that the Third Reich purposely sent this guy as far away from Germany as possible?

It all culminates in Batman giving readers a step-by-step guide on how to defeat Nazis. I hope you are taking notes.

For all its faults, I love this story. It is so ridiculous that I can’t help it. I love the fact that American selfishness is such a huge problem that Batman and Robin feel the need to abandon Gotham City for a week to guilt everyone into donating money. I love the Nazi bashing. Most of all, I love the bond wagon’s production values. They rent out Independence Hall to reenact the signing of the Declaration of Independence! I assume Bruce Wayne is bankrolling this, because no way are they getting all that money back through war bonds.

Of course, if Bruce had all that money to spare on a roadshow, he could have just donated it to the war effort and had done with it. But I suppose the bond wagon was about bringing people together and creating a communal, can-do atmosphere as much as it was about money.

Well, what are you still sitting here for? Go buy some war bonds!