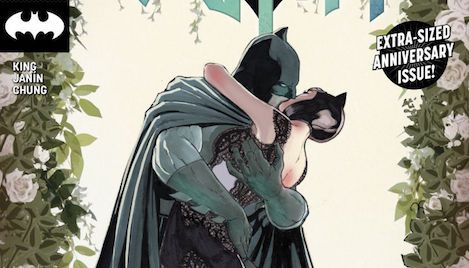 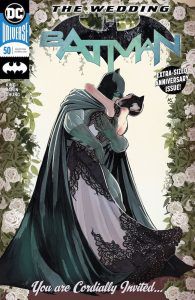 For the last year, DC has been building up to the A-list superhero nuptials of Batman and Catwoman. Over the past couple of months they’ve ramped up the promo with tie-in issues, crossovers, the announcement of a new Catwoman series, and a social media blitz for Selina’s stunning gown (designed by Joelle Jones, who will also be writing and drawing the Catwoman series, which launches in July).

On Wednesday, July 4th, the wedding issue—Batman #50, to be precise—was scheduled for release.

And on Sunday, July 1st, the New York Times released a review of the forthcoming issue that spoiled the issue’s climax. In the headline.

[Note: There will be no spoilers in this article. However, if you want the spoilers, you can click here to read the original New York Times piece. Or buy the comic.]

Fans were furious. Who spoils a major event three days before the issue’s release? Who puts a spoiler in a headline? Wasn’t DC pissed?

The Times…sort of apologized? In that they released a condescending article titled “A Vows Feature Spoiled a Comic Book Ending, and You Weren’t Happy” (note: no spoilers are included in this article, either) to ostensibly poll their readership on how they felt about spoilers, but which included lines like “The piece was a fun feature in the Vows pages of the Styles section, but many of our readers took it very seriously.” Just so that you’re perfectly clear that the article was fun (whether you thought so or not), and that if you actually cared about something as frivolous and immature as comic books (which the Times no longer deigns to even include a bestseller list for), then you’re the problem.

Now, I don’t particularly care what the Times thinks of comics, since the world isn’t exactly starving for think pieces on how R. Crumb is the only creator worth reading or reviews that forget to include the artist’s name. But I’m fascinated by this debacle because it’s yet another example of how comic book publishers are hilariously terrible at marketing.

Because make no mistake—DC was fully aware that the Times would spoil their big event. They were counting on it.

Now, I don’t have an inside line here or anything. But publishers spoiling their own content isn’t anything new. Heck, the Times spoiled an X-Men wedding last month! More prominently, two years ago, Marvel leaked the reveal that kicked off their dreadful HydraCap plot line; then–Editor in Chief Axel Alonso subsequently wrung his hands about the mean old retailers who threatened to leak spoilers, forcing Marvel to do so first through a mainstream outlet to control the narrative, and how fans who read those spoilers (except when Marvel releases them) aren’t “true comics fans” (and either way you should buy the Nazi comics, thanks).

Every form of serialized fiction does Big! Shocking! Events! to keep their audiences engaged—Sweeps Week is a thing, after all—but comics are particularly prone to it and adorably bad at capitalizing on it. It doesn’t help that the industry can’t quite shake the ghost of The Death of Superman, the massively successful 1992 crossover that spoiled the ending in its own title. DC never expected the media blitz that ensued—which was exacerbated by the fact that it was apparently a literal slow news day, and also by the fact that mainstream outlets didn’t realize what comic book fans did, which was that Superman would obviously be coming back. (Autobiographical side note: somewhere around 1995, some years before I started reading comics, a friend mentioned that he’d picked up the latest issue of Superman, and I asked, very confused, “Isn’t he dead?” He laughed at me.)

Since then, the Big Two have killed off A-listers left and right in attempts to court a wider audience: Captain America! Spider-Man! Batman! (Retailers expecting Batman’s death in 2008’s Final Crisis to do anything close to Death of Superman were stuck with a whole lot of leftover copies. And that’s after only ordering about 100,000 per issue, as opposed to the six million copies of Death of Superman sold in 1992. Which, another side note: the sheer volume of copies on the market is why your dad’s mint condition issue didn’t put you through college like he thought it would. Sorry.)

Mainstream audiences are used to these kinds of superhero stunts now, partially thanks to the frequency of them and partially to movies like Batman v. Superman and Infinity War. Plus, we never have slow news days anymore. Unfortunately.

Well, move the release date, obviously. But if for some reason you can’t or don’t want to do that, you drum up excitement for the issue by letting the New York Times release tantalizing details to their global, mainstream audience.

…And then the Times not only spoils the whole thing in the headline (which will get shared on people’s social media feeds whether they’d like to avoid spoilers or not), they describe the entire plot of the issue in the article. Now existing fans are pissed, and mainstream readers who might have picked up the issue out of curiosity have had that curiosity sated for free.

Again, I have no inside track here. I have no idea if DC asked the Times to spoil or not spoil, if they specified a release date for the article, if they got final say over the piece itself. And we won’t know until the sales figures come out how this might have affected the bottom line.

But aside from the very good points that are being made all over the internet about the content of Batman #50, the marketing around it has revealed some more of the weak points of this bizarre little industry. And that’s a pretty entertaining story in and of itself.