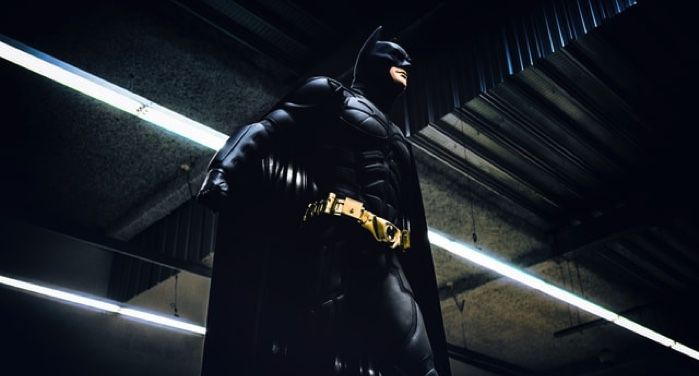 Let’s be real and start this off right. I, Aurora Lydia Dominguez, am a huge fan of Batman as a character and I am also a fan of following his stories in cartoons and comic books. To the point that, recently, I made the permanent decision of tattooing the classic Batman symbol, in all its yellow and black glory, in a small size on my arm. No regrets! It’s perfect!

With that said, while I love the animated and unique drawing-filled comic stories, I also am a big fan of the Batman cinematic universe and movies. My husband, Sebastian, actually had a wide-eyed moment when I told him I was writing, and excited to write, an essay about Batman on film. “You might get cancelled if you say just one Batman actor is good! Be very careful,” he said, jokingly. “People are really passionate about this topic.” He’s right, though, I am passionate about it, as well as other people are. So, let’s begin this with a careful statement.

While some people might prefer one Batman film or television representation over another, I believe there is a Batman rendition for everyone. All of us, as fans of the Gotham City hero, have strong feelings about who played it better, how they played it, and why it was so perfect or amazing. We all have one, or even two or three, Batman actor-driven representations that really resonate with us and leave a lasting impression, long after we walk out of the movie theater or turn off our TV.

So, let’s begin. I am not ranking them on best to worst. I refuse to do that. This essay is strictly an analysis of the character showcased in different movies and even a television show throughout the years. To me, they all have something unique about their style that certain fans, or everyone, can enjoy.

In 1966, the Batman television show came to life. Actor Adam West portrayed the character, and it was a wonderful rendition for the ’60s. From the colorful style of the show, to hilarious sitcom-like heist moments, lots of funny commentary between other characters, such as Robin and even Joker, this show had a tongue-in-cheek style that made it fun, entertaining and hilarious. Did anyone catch the episode with Joker and Batman, where there was a surfing competition involved? No? Highly recommend it!

Then there was the late ’80s/early ’90s dark crusader of choice, Michael Keaton. His movies, Batman released in 1989 and Batman Returns in 1992, were nothing short of fantastic. What Keaton brought to Batman’s character was a sense of his comedic background as an actor, as well as a mysterious style that made his Batman one that could go back and forth from a quick laugh to a more serious and threatening moment. Batman also represented the 1980s to a tee, with its snazzy Prince-featured soundtrack. Perfection. The fond childhood memories I have of the movies with Michael Keaton’s performances fostered a love in me for the character that has extended to today.

Now, let’s bring it firmly to the ’90s! Who can forget Kevin Conroy and Batman: The Animated Series from the years 1992 to 1995? This cartoon series introduced Conroy as the voice of Bruce Wayne and Batman. His success was incomparable, as he is most known for being the first voice actor to use two distinct voices to portray Bruce Wayne and Batman, making sure he gave them each a different style to showcase the character’s diversity. While Keaton was known for doing this in the live-action films in the ’80s, Conroy has had a lengthy career of being, well, Batman. Not only did the series propel him into a devoted fandom, but, he also became the man to voice Batman for the DC Animated Universe from then on, with spin-offs following from 1997 to now, which include DC animated films as well as more television shows and video games. Let’s just say, Conroy is a legend when it comes to the caped crusader. And, the show where he first started voicing Batman was the same one that introduced us to the blessing that is Harley Quinn. Amazing.

Now let’s talk about Val Kilmer, George Clooney, and Ben Affleck as Batman. Kilmer was the star of 1995’s Batman Forever. That movie ignited my teenage passion for Batman. Kilmer’s rendition had great cartoonish and upbeat elements that were not only really engaging for teenagers, but were also a great contrast to Jim Carrey’s The Riddler. And audiences seemed to enjoy Kilmer’s smooth and engaging demeanor. I still wonder what could’ve come of movies with more Kilmer in them, but at least I can still listen to another great soundtrack with Seal’s Kiss From a Rose and U2’s Hold Me, Thrill Me, Kiss Me, Kill Me. Memories!

While George Clooney’s version of Batman wasn’t necessarily critically acclaimed, it still found a legion of fans and the particular movie he starred in — 1997’s Batman and Robin — became quite a cult classic. Clooney actually said in 2013 that he keeps a photo of himself as Batman to remind himself of the bad decision. Nah, buddy. Listen, we all make what we think are mistakes that make us grow as people. Here’s my honest take: The director’s colorful showcase of the Batman world was fun, even if it wasn’t what people thought was perfect. I remember also seeing this one as a teenager and actually being entertained by Clooney’s laid back, chill Batman that cracked a few jokes here and there. So yeah, it wasn’t all that dark and was even a little cheesy, but it worked for me and many others at the time.

Clooney’s Batman wasn’t nearly as controversial as Ben Affleck’s, though. Affleck was criticized for taking on the role in Batman v Superman: Dawn of Justice and Justice League in 2016. There were a lot of controversies surrounding both movies, and people didn’t really care for the cheeky rather than serious turn that Justice League took. This eventually led to the release of Zack Snyder’s Justice League, though, which had a much better reception. As far as Affleck’s portrayal, again, I thought he wasn’t too bad. He brought a broodiness and vulnerability to Batman that I appreciated. I also think his performance may have been eclipsed somewhat by behind-the-scenes drama. I will say, though, that at least we got Gal Gadot’s Wonder Woman out of it!

Now, let’s bring in another Batman to the conversation, Christian Bale. Bale physically became Batman at 6’1 in height and 210 pounds, which mirrored DC Comics and their physical interpretation of the character. I feel like he did great in the films. From 2005 to 2012, he starred as Batman in the movies Batman Begins, The Dark Knight and The Dark Knight Rises. Bale’s dark, unforgiving, and pretty straightforward attitude worked for this Batman and the films. And who can forget his amazing chemistry with the wonderful, late Heath Ledger and his representation of the Joker? It was fantastic. Not to mention, Bale gave me and many other Batman fans chills with how intense he would take on Batman’s personality and he added such great drama to the character.

Now, it’s the time you’ve all been waiting for! Time to talk about Robert Pattinson and his film, The Batman, which released recently in 2022. What can I say? Simply wow, and many others agree. While many tried to joke around that Pattinson was going to be a terrible Batman, just because he played broody vampire Edward in the Twilight films based on the books, I feel like it’s time to move on from that ASAP and admit that Pattinson nailed it. From his intense stare to deep voice and the way he wore the suit, I feel he fully embodied the character. I loved how this was more of a detective story on its own and showcased how Batman wanted to, honestly, simply make Gotham a better place. He wanted to be a hero, not to just kick and kill some villains around and call it a fast victory. This Batman also wanted to give Gotham hope, and make sure that the people in the city knew he was trying at all times to be there for them. Then there was the dark and eerie atmosphere, full of furious energy that had me watching the movie not once, but twice, as I was fortunate enough to have been invited to a pre-screening of the film in Miami. To our surprise, Pattinson himself showed up to introduce the film, and said how he was honored to have been given the chance to play him at all and hoped people enjoyed it. I certainly did!

I can’t end without shout out to all the LEGO fans, kids, and tweens at heart! Will Arnett voiced LEGO Batman, and boy, was his rendition fun! He voiced the hero from 2014 to 2019 in The Lego Movie, The Lego Batman Movie and even The Lego Movie 2: The Second Part. This cartoon and LEGO brick Batman was hilarious and entertaining for anyone who wants to give a fun movie or two a shot. I’m a LEGO fan, so is my husband — he has small LEGO city — so this film doubly worked for us. I’ve added it to my favorite Batman renditions.

We can watch a Batman movie to match any mood. This is why I respect the work these actors do and have enjoyed the experience of watching them throughout the years.

So what do you think of Batman? What are your thoughts on Batman throughout the years on the screen? Let me know on Twitter @AuroraMiami and us @BookRiot. Batman always!