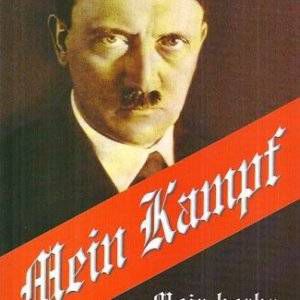 You might have seen this recent LA Times article about British politicians discussing whether or not Adolf Hitler’s Mein Kampf should be banned or not. Apparently, the copyright to this massive door-stopper/butt-rest is set to expire this year, and those countries throughout Europe that have banned its distribution are trying to figure out what to do about it. What should they do?

I’ll say up front that I am a Jewish woman of Eastern European descent and I have not read Mein Kampf (except pieces here and there). I went to a Jewish day school for elementary school and Hebrew school for many years beyond that. You can’t even imagine how much I learned about the Holocaust. When I was in 3rd or 4th grade, I remember going with my class to an assembly for Holocaust Remembrance Day, and seeing photo after photo on the walls and on tables of some of the most horrific scenes from concentration camps and trains. The idea, I suppose, was to shock us into remembering everything we could about the horrendous destruction of human life, in the hope that this massive tragedy would never happen again.

At school and at synagogue, we heard Holocaust survivors speak about their experiences in ghettos and camps, and we read books and watched films about it. It was so overwhelming for me, at times, that even now I occasionally have nightmares about Nazis chasing me and shooting at me.

All that being said, should Mein Kampf be banned in Europe, or anywhere? Hell no. Why not?

Because banning books is always wrong.

It’s cowardly, unforgivably stupid, and usually just an excuse for some other agenda. Under careful examination, any justification for censoring any book falls apart; go read Josh Corman’s piece about his defense of students reading The Handmaid’s Tale. He shows us how an articulate, thoughtful teacher and human being can reveal the ridiculousness of knee-jerk reactions to “controversial” books.

Not convinced? Then let me take a sharp axe to the LA Times article and do some dissecting. *rubs hands together*

The article quotes Parliament member Thomas Docherty claiming that he’s not explicitly calling for the book to be banned, only that “we should…have a debate about whether or not it should be banned,” and then goes on to self-righteously and rhetorically ask if shutting down such a discussion wouldn’t in itself be a kind of censorship.

Give me a break, you self-serving, self-aggrandizing politician. I mean, it’s International Holocaust Remembrance Day, so clearly somebody must bring up something about the Holocaust to say later that he is defending Jews and Europeans and space aliens and grizzly bears from the evil machinations of a bunch of dead trees with writing on them. Clearly. Oh, and he/she just HAPPENS to be up for re-election.

But let’s bring up the slippery-slope argument. If you ban Mein Kampf forever, what’s stopping people from banning other books that make disparaging or disgusting remarks about individuals or groups? What about fiction that includes such scenes? Clearly, I’m not an advocate of that kind of thing, but as far as I know, there aren’t any laws forcing people to read certain books (if I’m wrong, tell me). If I hear that a book is out that, for example, just rips some famous person a new one, I’ll make the individual decision not to read it. But if I do want to read it, then I should have access to it. If we agree that we are thinking, feeling human beings who may/may not have free will, then shouldn’t we expect complete access to anything that’s ever been written? Words don’t make people do anything, unless those words somehow give off a weird hypnotic vibe. People use words to make decisions. And if they decide, because they read a book, to commit a crime, then throw their ass in jail. But don’t ban the book.

Furthermore, when a book is banned, that doesn’t mean that POOF the book goes up in smoke and it’s now gone forever from every place on Earth. Hardly. It just means that those in power (politicians, parents, administrators, etc.) have decided for us that it’s for our own good that we not read a certain book. But how do we know that these same people aren’t reading it themselves? Or that they never even read it at all? And what about the fact that we should be able to decide for ourselves what is “good for us.” We all have brains and the capability of analytical thought, you pompous knowledge-haters.

This same Thomas What’s-His-Face politician claims that he’s not talking about books like The Satanic Verses or films like The Last Temptation of Christ, but only about books like Mein Kampf that “specifically set out to incite hatred. It is literally the manifesto for Nazism.”

Hmmm, now what is that thing they always say when the subject of the Holocaust comes up? “If we forget the Holocaust, we are doomed to repeat it”? Well, banning “the manifesto for Nazism” sure sounds like willful forgetting to me. It’s like saying, “hey people, let’s remember the horrible things the Nazis did, but let’s not read the books and pamphlets and articles written at the time justifying them so that we can have a solid historical context for understanding how and why such a thing could have happened. NO. Let’s not read any of that stuff, and just remember that we must remember that the Holocaust was bad because bad things happened but we’re not sure how it happened but whatever.”

Why do we read any historical documents? Why did I go out and buy The Communist Manifesto when I was a teenager, for instance? Was it so that I could learn how to set up my own communist utopia? Was it to learn how to rock a beard like Karl Marx or Friedrich Engels? No, it was because I kept learning about the evils of communism in school and yet no one would give me the founding documents to read so that I could use them to more fully understand why people were telling me that communism was wrong, always fails, etc. etc. I remember buying the book when I was out with my mom, and she expressed some surprise that it was even available. But she was born just as the Cold War began and witnessed the collapse of the Soviet Union like many other baby-boomers, and she had been drilled so hard about the evils of communist Russia that she couldn’t believe one could just saunter into a bookstore and buy the Manifesto.

I remember feeling proud that I lived in a country where infamous, controversial books were freely available. And while I try to not make blanket statements about morality and ethics in a world that is wonderfully diverse, I will stand up and say that I don’t care where you live, you should be able to read anything you want to read and think any thing you want to think. Dammit, isn’t that a major part of being human?

So go out there are read as many banned books as you can. Recommend them to friends and family. Teach them in schools. Protest against censorship. Do the right thing.