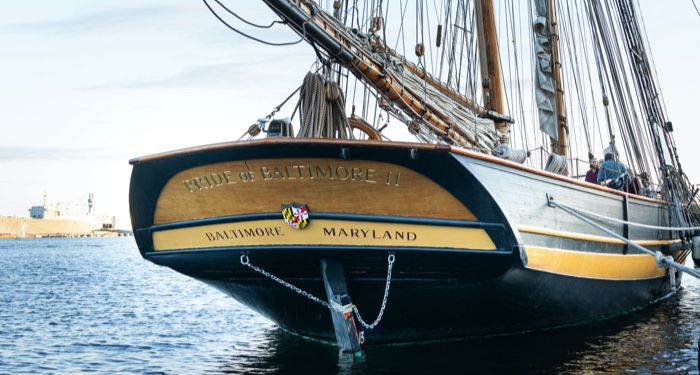 As the United States goes, Baltimore is an old city. Established in 1729 by the Maryland constitution, it is now the 30th most populous city in the U.S. with a population just under 3 million. Baltimore’s Inner Harbor was once the second largest port of entry for immigrants and the city is home to some of the first national historic districts in the country.

You know what that means.

Correct. Lots of ghosts. And lots of ghost stories. I may even have some creative teams in mind to bring those stories to life as comics…

The Fell brothers arrived to the Baltimore area in 1700, choosing a forested area near a waterfront that would eventually bear their name (there’s a debate as to whether the proper name for the neighborhood is Fells Point or Fell’s Point). As an ideal place for shipbuilding, the settlement grew rapidly and soon acquired all of the other trappings required by 18th century heavy industry: houses, support businesses, pubs, and brothels).

The neighborhood cemetery was originally named Bond Cemetery, but the name was changed to Fell Cemetery when someone realized the only marker left on the property bore the famous family’s name. Bordered by row houses on both sides, there’s a fair bit of speculation about whether or not there are any bodies still buried in Fell Cemetery. Some say the Fells were buried there but have been exhumed and moved for some unknown reason. Others claim only the men’s bodies remain. Still others believe, in an even more bizarre accident (or maybe not) of history, the Fell women were never interred in the family plots but no one knows—or recorded—where they are.

Legend has it one of the Fell brothers walks the old cobblestone streets after last call at the neighborhood bars.

Underwood’s Geekomancy series are really fun, nerdy adventures that play on RPG tropes and pop-culture references to create a world not only readers but the characters enjoy, even in those moments they’re getting their butts handed to them (which, really, that needs to happen from time to time for a story to be interesting). The Geekomancy novels are also oddly cozy books in which you have time to get to know the personalities of the players and even see their lives outside of the main plot lines—something I very much enjoy and, I think, would suit the two levels of the Fells’ story; the one on which we have the opportunity to examine the lives of the brothers and their descendants, to solve the mystery of the missing headstones, the missing bodies, and the missing women. Underwood can also write on a much larger scale—his space opera Annihilation Aria is due out on May 5, which means he can also take the long view of the town that grew up around the Fells’ original settlement, the industry, and the culture of the time, then integrate the micro and macro together into a single tapestry. Normally I’d pick a lady to tell the story of witches getting revenge on men who have it coming but 1) I know Mike and I know he’ll do right by them and 2) he knows the Baltimore area really well and there’s something to be said for the ability to make the city a character in its own right. 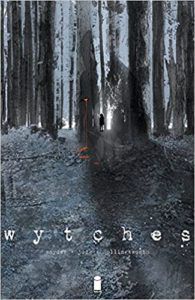 Jock did the art for Scott Snyder’s Wytches and he has the spooky down. Having also worked on Batman and Wolverine books, he’s no stranger to sharp lines, action, and, when necessary, violence. I want the ladies in this story to get their due and their vengeance, and if Mike can craft the words, Jock can bring the art.

Commissioned in 1855, the Constellation is a large warship that was active for 100 years not only in martial conflicts but also as part of the fleet utilized to stop smugglers from importing slaves after the 1807 ban (the crew captured three slave ships and freed 705 people, including 199 women and children). The Constellation ended its service after the Civil War, in which, despite being pitted against the new steam powered ships, it still proved useful in protecting Union interests off the coast of Africa; it’s credited with helping capture the Sumter. The ship was decommissioned in 1955 and designated a National Historic Landmark.

Spirits are said walk to the deck of the Constellation, now docked near the Baltimore Aquarium in Baltimore’s Inner Harbor with a museum gallery near Pier 1. If you’re there at the right time, you might even catch the haunts from the gun ports. You may or may not believe the tales of disembodied voices and lights below decks, but if you’re keen to test your skepticism, and your courage, you can arrange to spend the night aboard ship.

Lady Brion (Brion Gill) is a Baltimore-based spoken word poet, poetry coach, activist, organizer, and educator. She has taught workshops at elementary schools, prisons, and group homes. A poet, especially a slam poet, feels like the perfect choice for a story that involves the sea and sailing, a profession that, back in the day, was so closely associated with a particular type of music with a very specific cadence and purpose. Pairing that with the verbiage and and impact of modern slam poetry, especially to tell the story of a ship and crew involved in halting human trafficking, an issue both in the 18th and 19th centuries and today, would be particularly affecting. 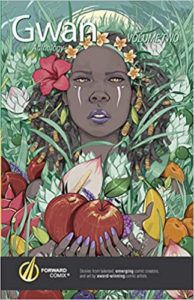 Amari Harkness has experience illustrating supernatural tales focused in and around water: she did the art for Ayomide Omobo’s Osun in Gwan Volume 2. The tale of four women affected by police brutality and racism, one of whom becomes a goddess of vengeance who wields water as a weapon, Osun explores what the most powerful woman of color will do to protect the people she loves. Harkness’s solid figures and in contrast to the softer features of the water would suit the story of the Constellation beautifully.

Melissa Rowell, co-owner of Baltimore Ghost Tours, stopped into the Cat’s Eye Pub one morning in 2003 to buy her father a shirt. There was on bartender staffing the place who sold her the shirt after a quick conversation. A few months later, Rowell happened to be back at the Cat’s Eye and mentioned the man to another employee. The second employee was a bit confused; they Cat’s Eye didn’t have a bartender who even came close to fitting Rowell’s description. When Rowell told her the man’s name the other woman seemed even more surprised and went to get a photograph she showed Rowell. Rowell identified the man as the bartender who had sold her the shirt, with whom she had spoken, and whose fingers she distinctly remembered being able to feel when she handed him the money.

In 2003, that man, who had been a bartender in Fells Point for 30 years, had been dead for eight. 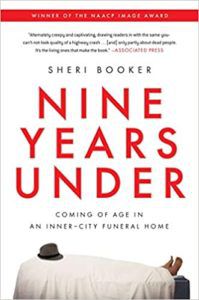 If there’s anyone you want writing up a creepy story, it’s some who spent nine years working on a funeral home and then wrote a memoir about them (Nine Years Under: Coming of Age in an Inner-City Funeral Home). Sheri Booker was 15 when she started at Wylie’s Funeral Home is West Baltimore, a summer job that would become much more. Booker witnessed the most intimate, terrible, and moving moments families can experience. This particular haunting is a personal story and I feel as though only an author who’s comfortable with death, who’s touched it, studied it, can do it justice, especially when the ghost is an identifiable individual and a neighborhood institution.

And yes, if you’re wondering, I’ve already taken Nine Years Under out of the library.

I discovered Okera Damani’s art in Gwan Volume 2 as well, where he has a piece named “Gladiis.” It’s an innovative comic style, part 2D illustration and part 3D rendering, which gives the entire image a depth most comics are still working to achieve. I think a modern style like Damani’s would work perfectly for a modern tale and the various planes in which the art is built could be used to great effect to delineate worthy creatures from otherworldly ones, especially as the reader has the opportunity to see them from different angles.

I believe last time I said I was planning on heading west to Bozeman, Montana. My apologies, I got distracted. No worries. There are plenty of stories left…