It’s just after the turn of the year here – in which we all wait to see if 2017 will be better than 2016, or if the planet will just give up and explode – and there are two things that happen around this time of the year. One is that everyone makes resolutions. But the other, pre-New-Year, is the Best Books Of…lists.

You and I just saw a zillion of them. Best Books of 2016, in every list variation and with any number of books, on every website that even remotely touches on books. And then there’s their cousin, the Most Anticipated Books of 2017 lists.

There’s a ton of them. Book Riot has ’em, same as everyone else. I could have even contributed to those lists, when they happened.

But I didn’t, because they completely baffle me.

Not the reading of them. I actually quite like reading the lists, finding out what everyone else liked (and why, I love it when people like books I loved, and for similar reasons), and I even like the lists which mention books that’ll be coming out in the upcoming year, because I always wind up with some interesting titles to keep an eye out for.

What baffles me is, how the hell does anyone pick anything? 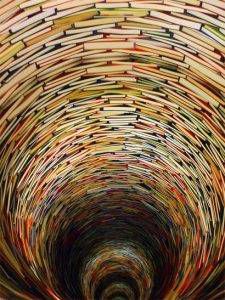 The inside of my head, when trying to pick favorites.

It doesn’t matter what the context is, whenever I have to try and pick my favorite book, I just jam up. I am completely useless. In fact, one would quickly get the impression that I was lying the whole time and in fact, I have never read a book. Oh, I can recommend tons of books for people, based on other books they liked or just what I know about that person, that’s easy. But just to absolutely state my favorite book? Whether it’s of the year, of all time, or of any time frame larger than about a week? My mind absolutely melts.

Part of the problem with picking a favorite book is that I don’t read books I dislike. That seems like a silly sentence, but it turns out some people do! They’ll feel they have to finish books, even if they aren’t enjoying it. Personally, I don’t get it, but hey, they can do whatever they like. If I don’t like a book, or I’m not enjoying it, I stop reading it. It isn’t even a conscious decision, I just sort of forget about it. I’m usually reading two or three things at once anyhow, so I wind up just wandering off to the ones I’m enjoying and eventually, the one that bored me migrates back to my shelves where it can wallow in its shame of not being good enough.

(I keep a log of all the books I read each year, but that doesn’t help either. I re-read it and go “oh, hey, I loved that book. And that one! And that one! Oh, and that one!” And so forth.)

It’s the same problem with Most Anticipated lists, sort of. I saw an article title which was What book are you most looking forward to in 2017? and my answer was ALL OF THEM. I mean, I know a lot of what’s coming out in 2017 – I’ve even read a bunch of books now that aren’t out until various times in 2017 – and they were great! So now I’m facing the exact same problem, but from the other direction, unable to pick favorites from books which aren’t even out yet.

I don’t know, folks. Basically, if this is something you are capable of – if you’re contributed to or written a list yourself – then my hat is off to you. Several hats, in fact. I’ll borrow extra hats from elsewhere just to take them off to you.

My solutions for next year are 1) make someone else pick my favorite book of the year, which also means I can blame them if it sucks. Or, 2) Pick a book title completely at random and declare that this is my favorite title of the year. This should work fine unless I accidentally pick some insane book on how to build landmines for fun pleasure and profit right there in your own living room.

Or 3) Post every single book I read in the year and refuse to claim any favorites. You know, just like your parents.