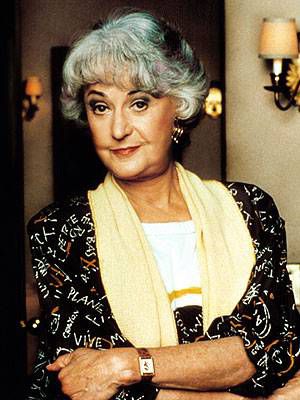 Sometimes I really like to get all confessional and embarrass myself a little bit on the internet.

In one of my favorite episodes of Golden Girls, which I first saw in reruns when I was an early teen, Blanche doesn’t have a date, and Dorothy invites her along to the library. I adore the library and (obviously) books, so I am actually going to transcribe entire exchanges from the episode.

First, though, I must admit that it was weird as a teenager to hear my thoughts coming out of the mouth of someone who was older than my mother.

Books were kind of it for me in those days. Books and music. I lived in a rural area where (seriously) I was related to pretty much everyone in some way, and despite cliches to the contrary, that puts a real damper on a gal’s dating life. Always an introvert, I felt out of place and awkward at slumber parties and stopped going by seventh grade, with invitations eventually ceasing altogether and absolutely no hurt feelings about that.

About the dating, though, who am I kidding? I was a baby feminist, goth-lite, riot grrrl-wannabe and I wasn’t shy about expressing my opinions. My same-age role model was Daria Morgendorffer (who, in my personal bookish multiverse, is Miranda Hobbes through middle age, then becomes Dorothy Zbornak).

It was probably 1997 when I officially adopted Dorothy as my spiritual grandmother, which didn’t make me likable, but sometimes it made people laugh or leave me alone. And since I was so frequently left alone, I read. Unfortunately, unlike Dorothy, I didn’t get to use the public library as a kid. The librarian accused me of stealing a book, one that I’d never checked out. Imagine nine-year-old me, trying to explain to the lady behind the desk that no, I hadn’t checked out a Baby-Sitters Club book twelve volumes ahead of where I was in the series: “Why would I get one that far ahead? Don’t you see I’ve been checking them out in order?!” The card system was outmoded and the record-keeping inaccurate—everything was cleared up eventually—but she was so mean she put me off the place entirely.

But back to the funny.

I recently re-watched “Stand by Your Man” (episode #6.11) as part of a project (mining Golden Girls for post ideas, basically) and loved it as much as ever, especially since my own relationship with my local library (in a different town) has grown so strong in the past year.

Here are my favorite bits:

Blanche: I do not believe it. Saturday, and I don’t have a date.
Dorothy: Oh, come on, Blanche. Do what I do when I don’t have a date. I curl up with a good book and I’m satisfied.
Sophia: It’s my fault. I read to her as a child.
Dorothy: As a matter of fact, I’m going to the library in a few minutes. Do you want to come?
Blanche: The library? That’s a great idea. I just love libraries.

Blanche: (on entering the library) So many books!
Dorothy: That’s why they call it a library. From the Latin ‘librarius’ which means ‘so many books.’

Dorothy: My mother talked me into getting her the new Stephen King.
Librarian: Well, we do have the one that came out last Tuesday.
Dorothy: As long as it’s not about some little creature who finds new and inventive ways of terrorizing a household. It’s for my mother. I don’t want to give her any ideas.

Dorothy: There must be some mistake. I’m sure my mother’s card is current.
Librarian: See for yourself. It expired five years ago.
Dorothy: I don’t know how that could’ve happened. But I’ll put the book on my card. I want you to know that my card is always current. I come to the library at least three times a week and my books are always returned promptly during regular library hours rain or shine. Who are you to judge me?!