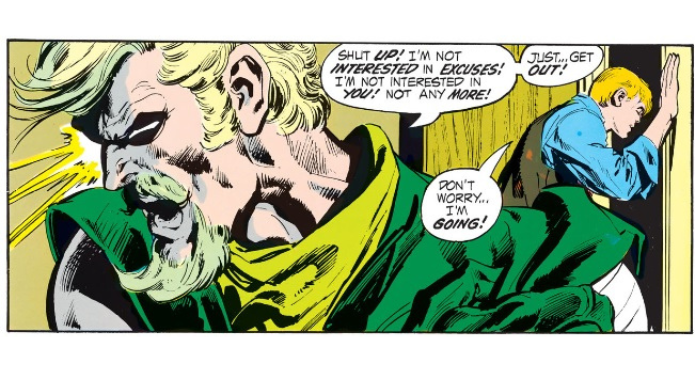 Some heroes work alone. Others form a team with other heroes to increase their capacity to protect others. And still others decide to take on a protégé, someone they can train in the art of crime-fighting and who can take their place should they fall in battle. Usually, that someone isn’t old enough to drive, but hey, it’s better to start ’em young, right?

But while sidekicks may be a standard part of the superhero experience, not everyone is cut out to be a mentor. There’s no shame in that, unless you take your problems out on the person who looked up to and was counting on you, thus screwing them up psychologically for the rest of their lives. To be a great mentor, you have to do more than teach a kid to throw punches and spout quips while dodging bullets: you have to support them when things go wrong. And, you know, talk to them once in a while. Talking is good. If you like going on spontaneous road trips with your adult friends or being evil, maybe mentoring is not for you.

So before you acquiesce to some eager urchin’s appeal to become your trusty sidekick in the war against crime, consider what they could end up doing if you aren’t up to the task.

In comicdom’s most infamous case of mentor suckage, Green Arrow started neglecting his sidekick Speedy in favor of kicking around the country with Green Lantern. Feeling abandoned, Speedy started doing heroin to cope.

GA’s response to finding out about Speedy’s addiction is equally infamous: he knocked him across the room and all but disowned him while blaming the neglected teen for his own problems. It fell to Green Arrow’s girlfriend Black Canary to help Speedy through withdrawal, after which Speedy returned to GA just long enough to deliver a well-deserved slug in the kisser.

What young hero wouldn’t be thrilled to be mentored by an established hero like the Invincible Iron Man? When Jack of Hearts asked Iron Man to take him on as an apprentice (not sidekick) in Iron Man #109, it seemed like the start of a beautiful friendship.

But after a single (albeit very long) adventure, Jack left to settle his murdered father’s estate. There’s no apparent animosity between them, and I almost hesitate to call Iron Man a sucky mentor, but it’s hard to deny that there wasn’t a whole lot of actual mentoring going on during their time together. They just sort of happened to be next to each other when villains attacked. But hey, that’s more than I can say of our next offender…

Get Along Just Fine

The Flash is generally not regarded as a bad mentor, but if you look back at his sidekick Kid Flash’s earliest days, you’ll notice that the two heroes rarely appear in the same room. Or the same story: the Flash gets the main feature (it is his book, after all), and Kid Flash is relegated to the back-up feature. So much for training the next generation!

Despite spending so little time together, Kid Flash turned out to be one of the more well-adjusted superheroes. (Heroes in Crisis does NOT count.) He did fine rescuing people alone, and when the Flash died, he managed to fill the Scarlet Speedster’s bright yellow boots admirably.

Make Them Do Better

Jolt probably had the worst mentors of all. This bright, enthusiastic teen was initially thrilled to join the team of heroes known as the Thunderbolts, only to see that excitement turn to horror when she discovered the T-bolts were supervillains in disguise.

Though horrified to learn she’d been kicking around with criminals, Jolt’s inherent optimism and faith in humanity allowed her to convince her elder teammates (most of them, anyway) that they could do better and become real heroes. And so it was.

Despite being the world’s most famous sidekick, Dick Grayson — formerly Robin, now Nightwing — has himself been a pretty suck-tastic mentor. Case in point: Tad Ryerstad, alias Nite-Wing. After Tad declares he’s serious about being a hero in Nightwing #43, Nightwing takes it upon himself to train him.

At no point does Dickie run any sort of background check on this guy, which would have been useful, as Tad is an incredibly nasty person who beats up and murders people for funsies. Eventually, Nightwing found out Tad had killed a federal agent and tried to make him turn himself in. Tad, predictably, ran off to go do more villainous things, AND now he was better trained than ever and knew all of Nightwing’s tricks and methods. Nice going, Short-pants.