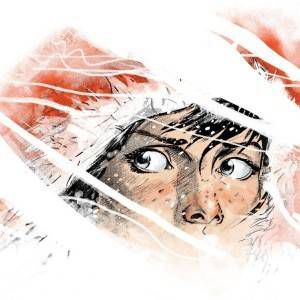 Sign-up for announcements about our fall launch of Panels, a Book Riot-powered site about comics!

There a number of reasons why I enjoy them. For one, no matter how bad the movie might be, they are usually gorgeous spectacles, full of stunning special effects. I can sit back and clap my hands at every explosion.

But the most important reason why I love a bad comic book movie, the kind that gets panned in the theater and sends fans of those comics into a fiery rage on the Internet? It’s because they almost always introduce me to a series or, in the case of graphic novels, a book, that I never would have read or heard about otherwise.

Comics are a recent passion of mine, so bad movies were an easy, highly publicized gateway. After a truly bad comic book movie, I almost always head over to the local comic book shop and pick up a book or two. After all, the comic had to be good in order to make it that far, right?

Here are a couple of amazing comics and graphic novels that, despite the bad movies, you should seriously read.

Whiteout: Remember the Kate Beckinsale film from 2009? It’s okay, no one else does either, really. The basis for the film is an amazing, award-winning series from Oni Press that debuted in 1998 by Greg Rucka and Steve Lieber.

Whiteout features one of the most bad-ass, strong female characters ever: Carrie Steko, a U.S. Marshall working in Antarctica. Well written and exciting, the series is drawn in beautifully stark black and white.

The series has been collected in two volumes, Whiteout and Whiteout: Melt, and you can read both over the course of an afternoon. There’s also a limited edition hardcover that’s like, impossible to find. If you have one and want to sell it, hit me up on Twitter like, immediately. Okay? Thanks.

The League of Extraordinary Gentlemen: Alright, I need to clear something up about this movie first. I actually love this movie. Like, genuinely adore it. However, I’m aware of the fact that it really isn’t all that good. But dammit, it is fun. Sean Connery plays Alan Quartermain! Stuart Townsend is Dorian Gray! Shane West is Tom Sawyer! And DAT NAUTILUS!

Okay. Now that’s out of my system.

When I first saw LXG, I wasn’t really into comics just yet. However, after watching the film and loving every awful minute (I’m a book nerd, and these characters were all hanging out!), I discovered Alan Moore’s amazing series. And the recent miniseries that have been coming out with Topshelf, 1910, 1969, and 2009, have been a lot of fun.

Virus: Here’s where I get to date myself quite a bit. Virus was a sci-fi horror film that came out in 1999 with Jamie Lee Curtis, and she didn’t even like the movie. As a kid, I watched this movie a few times on VHS, because I thought the robots looked really cool.

The story? An alien virus infects a ship, and starts using a robotics lab to kill, and subsequently create horrifying human-machine monstrosities. A salvage crew find this abandoned vessel and decide to make some serious cash… and then disaster.

The movie was actually based on a series that came out with Dark Horse in 1992. I didn’t get around to checking out the comic until much later, but it is definitely worth a read, and available in a collected paperback.

(BONUS PICK) Bulletproof Monk: That’s right. The movie with Stifler doing kung-fu is actually based on a series from Image Comics by Brett Lewis and R.A. Jones, with art by Michael Avon Oeming.

This one is actually on my to-read list. I stumbled across Bulletproof Monk fairly recently on Netflix one sleepless evening, and later discovered it was a comic book.

If any of you have read it, let me know. Image publishes some truly wonderful books (Saga, East of West, etc.), so this has to be a good time.